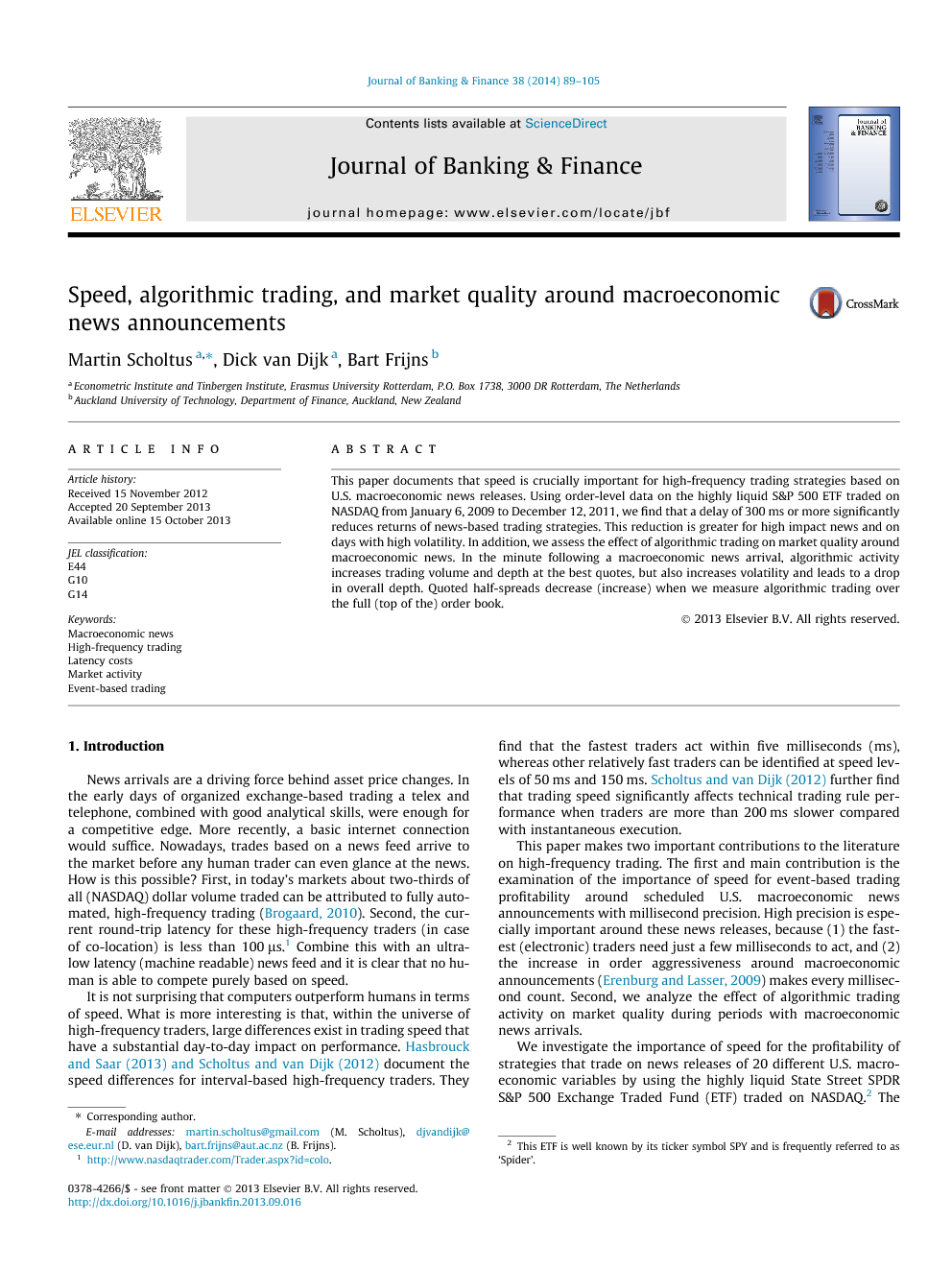 This paper documents that speed is crucially important for high-frequency trading strategies based on U.S. macroeconomic news releases. Using order-level data on the highly liquid S&P 500 ETF traded on NASDAQ from January 6, 2009 to December 12, 2011, we find that a delay of 300 ms or more significantly reduces returns of news-based trading strategies. This reduction is greater for high impact news and on days with high volatility. In addition, we assess the effect of algorithmic trading on market quality around macroeconomic news. In the minute following a macroeconomic news arrival, algorithmic activity increases trading volume and depth at the best quotes, but also increases volatility and leads to a drop in overall depth. Quoted half-spreads decrease (increase) when we measure algorithmic trading over the full (top of the) order book.

This paper investigates the importance of speed for event-based trading rules on U.S. macroeconomic news as well as the impact of algorithmic trading activity (AA) on market quality (MQ) around macroeconomic news arrivals. This is done by means of analyzing full order book activity of the highly liquid S&P 500 ETF traded on NASDAQ over the period January 6, 2009 to December 12, 2011 (736 trading days). Exact news arrival times are obtained from the SIRCA Global News Database. All MQ measures and AA proxies show a pronounced reaction to macroeconomic news announcements, especially those at 10:00 a.m. Depth measures decline, while quoted spreads, adverse selection costs and volatility measures increase during short windows around news releases – all pointing towards lower MQ. AA declines prior to the announcement, followed by an immediate and strong increase when the macroeconomic news is made public. When we regress MQ on the AA proxies, we find that both the choice of the AA proxy as well as the choice of the window around the event is important. In the minute following the news announcement, increases in AA trigger an increase in the number of shares quoted at the best bid and ask, a decrease in overall depth up to five cents away from the best bid and ask quote, a decrease (increase) in adverse selection costs (realized spreads), and an increase in price volatility. The effect on quoted half-spreads depends on the type of AA. An increase in AA across the full order book leads to a narrower bid-ask spread, while more AA at the top of the order book tends to widen the spread. For a 5 min window following the event, more differences between the AA proxy over the full order book and at top of the order book occur. An increase in AA over the full order book now has no effect on trading volume and decreases volatility, whereas increases in AA in the top of the order book lead to more trading volume and higher volatility. The results in the minute before the macroeconomic announcement show that increases in AA widen spreads and increase depth away from the best bid or ask quote. We find that trading speed is of statistical and economic importance for the returns of a macroeconomic news based trading strategy. For success ratios of 70% and 100%, a 300 ms delay in execution leads to a significant decrease in returns of 0.33 and 0.81 bps per event. In case of a 1 second delay, the losses per event (per year) increase to 0.62 and 1.62 bps (1.48% and 3.90%) for these success ratios. The corresponding opportunity costs of a $100,000 trade per macroeconomic news announcement are $10.02 (a hit ratio of 70%) and $21.73 (a hit ratio of 100%). The relative loss (with respect to the total return of the strategy) at a success rate of 100% (70%) and a delay of 1 second is 10.85% (20.05%), which is considerably more compared with the relative importance of speed of 2.03% for clock-based technical trading strategies in Scholtus and van Dijk (2012). Speed is more important for announcements in 2009, at 10:00 a.m., with a high news impact factor, on days with high volatility, with a SIRCA announcement time that is close to the official announcement time, and for announcements with a large news surprise. In addition, it is important to account for the fact that some macroeconomic variables are released early to subscribers.