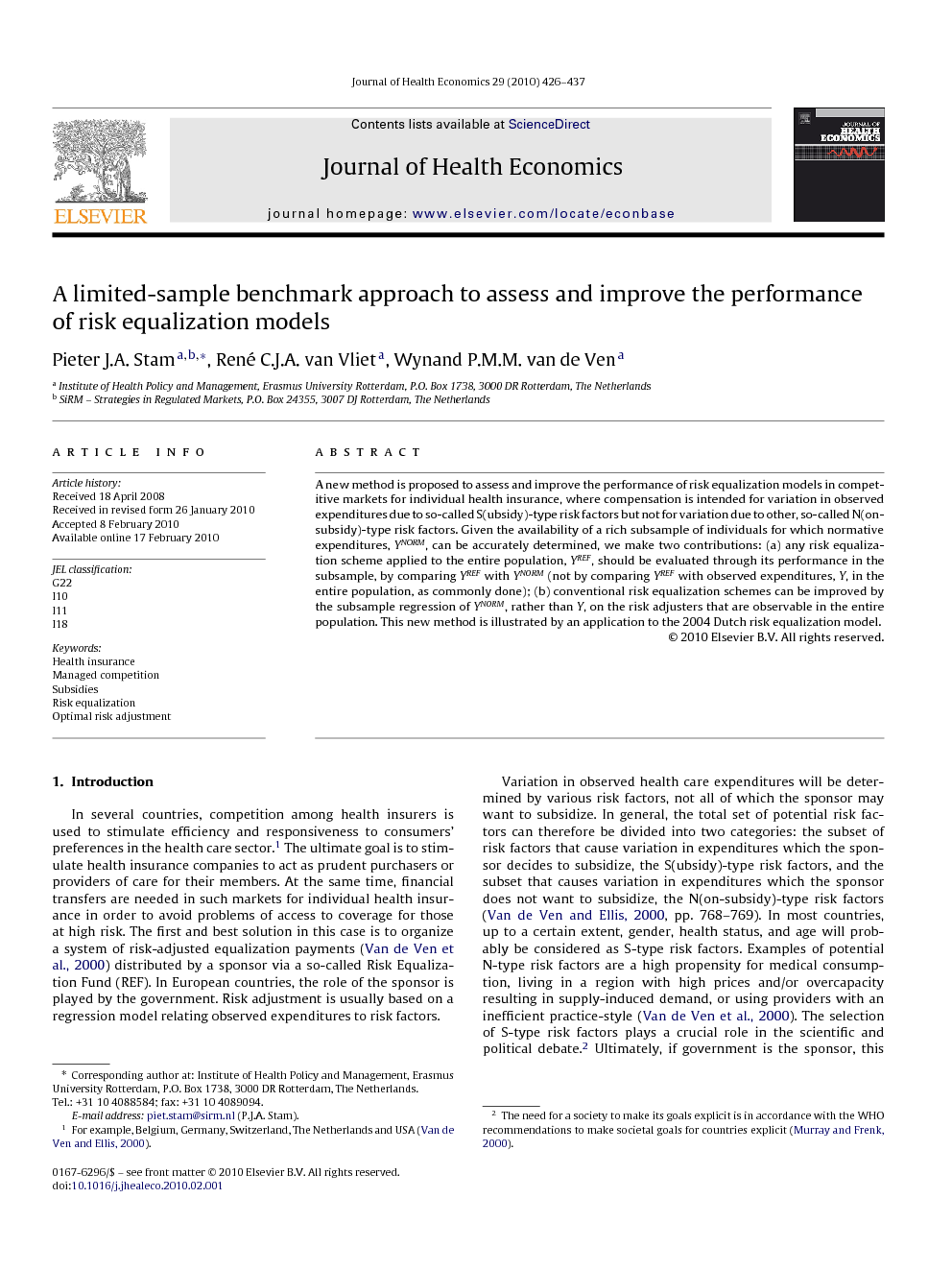 A new method is proposed to assess and improve the performance of risk equalization models in competitive markets for individual health insurance, where compensation is intended for variation in observed expenditures due to so-called S(ubsidy)-type risk factors but not for variation due to other, so-called N(on-subsidy)-type risk factors. Given the availability of a rich subsample of individuals for which normative expenditures, YNORM, can be accurately determined, we make two contributions: (a) any risk equalization scheme applied to the entire population, YREF, should be evaluated through its performance in the subsample, by comparing YREF with YNORM (not by comparing YREF with observed expenditures, Y, in the entire population, as commonly done); (b) conventional risk equalization schemes can be improved by the subsample regression of YNORM, rather than Y, on the risk adjusters that are observable in the entire population. This new method is illustrated by an application to the 2004 Dutch risk equalization model.

In several countries, competition among health insurers is used to stimulate efficiency and responsiveness to consumers’ preferences in the health care sector.1 The ultimate goal is to stimulate health insurance companies to act as prudent purchasers or providers of care for their members. At the same time, financial transfers are needed in such markets for individual health insurance in order to avoid problems of access to coverage for those at high risk. The first and best solution in this case is to organize a system of risk-adjusted equalization payments (Van de Ven et al., 2000) distributed by a sponsor via a so-called Risk Equalization Fund (REF). In European countries, the role of the sponsor is played by the government. Risk adjustment is usually based on a regression model relating observed expenditures to risk factors. Variation in observed health care expenditures will be determined by various risk factors, not all of which the sponsor may want to subsidize. In general, the total set of potential risk factors can therefore be divided into two categories: the subset of risk factors that cause variation in expenditures which the sponsor decides to subsidize, the S(ubsidy)-type risk factors, and the subset that causes variation in expenditures which the sponsor does not want to subsidize, the N(on-subsidy)-type risk factors (Van de Ven and Ellis, 2000, pp. 768–769). In most countries, up to a certain extent, gender, health status, and age will probably be considered as S-type risk factors. Examples of potential N-type risk factors are a high propensity for medical consumption, living in a region with high prices and/or overcapacity resulting in supply-induced demand, or using providers with an inefficient practice-style (Van de Ven et al., 2000). The selection of S-type risk factors plays a crucial role in the scientific and political debate.2 Ultimately, if government is the sponsor, this categorization will be determined by value judgments in society. Given a specific categorization of S-type and N-type risk factors, adequate measures thereof should be found in order to be able to implement a system of risk-adjusted equalization payments. However, although it may be relatively easy to collect information on age and gender, it often proves difficult to find direct measures of health status that can be made available for every insured individual. As a consequence, a rather limited set of indirect health status measures is often used instead, which may not only lead to undercompensation for expenditure variation caused by S-type risk factors, but also increases the risk of undesired compensation for expenditure variation caused by N-type risk factors. For example, working status may be used as an indirect measure of health status, although expenditure differences between employees and self-employed people may be partly caused by an N-type risk factor such as time price (“no time to visit a doctor”) and the resulting propensity for visiting a doctor. Although there are econometric techniques to avoid compensation for N-type variation, such an approach is seldomly applied because it often turns out to be an even bigger challenge to find adequate measures of the N-type risk factors for every insured individual than finding adequate measures of the S-type risk factors. To the extent that the sponsor might find (more) precise measures of S-type and N-type risk factors for a limited subsample of insured people, up till now a methodology was lacking to exploit this additional information to improve the equalization payments for the total population. The conventional method to determine the performance of a risk equalization model is to compare model predicted expenditures to observed expenditures. This study introduces a new method to assess the extent to which a given set of risk adjusters generate risk-adjusted equalization payments as intended by the sponsor. The basic idea of this new method is to develop a comprehensive “risk equalization” model for a subsample of insured people for whom more (precise) measures of S-type and/or N-type risk factors can be collected (for example, from tailor-made health surveys) than for the larger population of insured people on which the risk equalization model is estimated by the sponsor. We claim that performance of any risk equalization model should be assessed in the subsample as the difference between predicted expenditures from the former model (instead of observed expenditures) and the latter model predicted expenditures. A second innovation is that the results of this exercise can also be used to improve the performance of conventional risk equalization models, even though the extensive array of direct measures of the S-type and N-type risk factors are available for those in the limited subsample alone. To this end, predicted expenditures from the comprehensive model in the subsample (instead of observed expenditures) should be regressed on the risk adjusters that are observable in the entire population. The approach proposed in this study is relevant for all sponsors who need to assess and improve the extent to which their system of risk-adjusted equalization payments functions in accordance with their policy goals. In Section 2 the conceptual framework of our new approach is described. Section 3 gives an illustration by applying this method to the 2004 Dutch risk equalization model. Section 4 concludes, and Section 5 discusses the results.

A new method is introduced to assess and improve the performance of risk equalization models in case the sponsor intends subsidization for S-type risk factors alone, and not for N-type risk factors. As an empirical illustration, the new method is applied to the 2004 Dutch REF model. The S-type adjusters in the normative equation are drawn from a broad array of health status indicators, which were made available by merging administrative data with data from a tailor-made health survey for almost 19,000 respondents. At the population level of analysis, the performance of the 2004 Dutch REF model appears to be 90.2% in terms of the performance measure ρ2. This means that 90.2% of the variation in normative expenditures is captured by the REF adjusters. Of course, this result only holds under the assumption that normative expenditures in this empirical illustration reflect acceptable costs adequately. If the REF coefficients are adjusted following the normative approach developed in this study, then performance at the population level of analysis increases to 91.0%, which seems to be a modest improvement. Furthermore, performance hardly improves at all from including measures of N-type risk factors in the REF equation, at least not given the set of N-type adjusters used in this empirical example. This result is independent from the choice between an adjustment of the coefficients according to the Schokkaert approach or according to the normative adjustment approach developed in this study. The conclusion must be that performance of the 2004 Dutch REF equation can be improved by using adjusted REF coefficients according to the normative approach proposed in this study, mainly because this procedure exploits the extra information of the more (precise) measures of the S-type risk factors available in the subsample. At the subgroup level of analysis, substantial differences exist between REF predicted expenditures and normative expenditures for the subgroups defined by the REF adjusters. If the cross-subsidies are based on REF predicted expenditures, then the average risk-adjusted equalization payment for disabled insured people is higher than the sponsor intends, whereas for those on social welfare and being self-employed it is lower than intended. Furthermore, cross-subsidies among regions appear also to be misaligned to some extent. Any such difference is an estimate of the marginal effect on observed expenditures for which the sponsor does not desire cross-subsidization. Thus, at the subgroup level of analysis, there is ample room for improvement of the REF model by application of the new method proposed in this study. Moreover, if the REF coefficients are adjusted following our approach and applied instead of the unadjusted REF coefficients, then the risk-adjusted equalization payments to the subgroups defined by the REF adjusters insurance eligibility and region will even be exactly aligned to normative expenditures as defined for the study sample. Therefore, to the extent that normative expenditures reflect acceptable costs adequately, unintended subsidies among the subgroups defined by the REF adjusters can be avoided entirely if the sponsor uses these adjusted REF coefficients instead of the unadjusted ones in the REF equation.