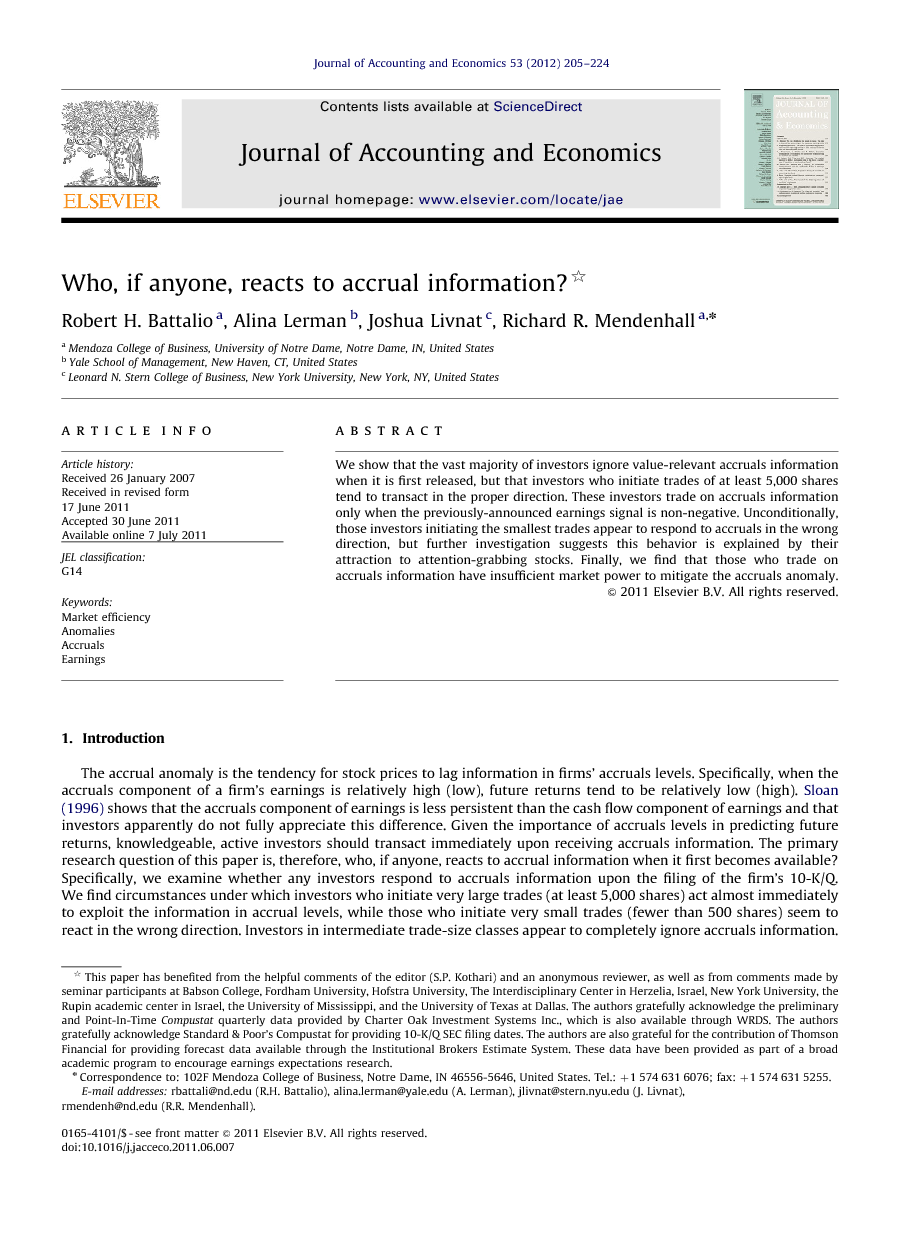 Previous research documents the persistence of the accrual anomaly, the negative correlation between firms' accrual levels and subsequent abnormal returns, over several decades. This association suggests that most investors did not fully appreciate the importance of accruals levels for future operating performance (e.g., Sloan, 1996). Lev and Nissim (2006) point out that “the timeliness of institutional response to accrual information is an important issue both for assessing market efficiency and explaining the persistence of the accrual anomaly” (pp. 196–197). If accrual information is valuable to investors, as most of the accrual literature and our own tests suggest, then sophisticated investors should react at the time the accrual signal first becomes available. Given that prior research indicates investors who initiate large trades act in a much more sophisticated manner around earnings announcements than those initiating small or medium size trades, we hypothesize that large traders might, on average, react to accruals information at the time of the 10-K/Q filing date, when it first becomes available. Based on the fact that even low accrual firms fail to exhibit positive abnormal returns following negative earnings surprises, we hypothesize that, if institutions cannot or will not go short, trading in response to accruals will be stronger following non-negative earnings surprises. Results support each of these hypotheses. Initially, we obtained results suggesting that investors who initiate the smallest trades, those less than 500 shares, respond in the opposite direction to the accrual information. Follow-up tests strongly suggest that, consistent with Barber and Odean (2008), these investors are attracted to “attention grabbing” stocks and are not acting in response to accruals. We believe this paper represents the first direct evidence that any subset of investors responds to the information in accrual information when it first becomes available. Prior tests rely on differences in share holdings measured at least 13 weeks apart, which, we argue, cannot isolate the effects of accruals levels from the other potential explanations. Our results are consistent with those of Battalio and Mendenhall (2005) in that the same group that exhibits the most sophisticated response to earnings announcements appears to also exhibit the most sophisticated response to accruals. Finally, although when large traders act correctly, they tend to reduce the accrual anomaly, we do not find evidence that their behavior in aggregate has a significant effect. The limited extent to which large traders act on accruals combined with the fact that less sophisticated traders do not respond at all, contributes to the puzzling persistence of the accrual anomaly.