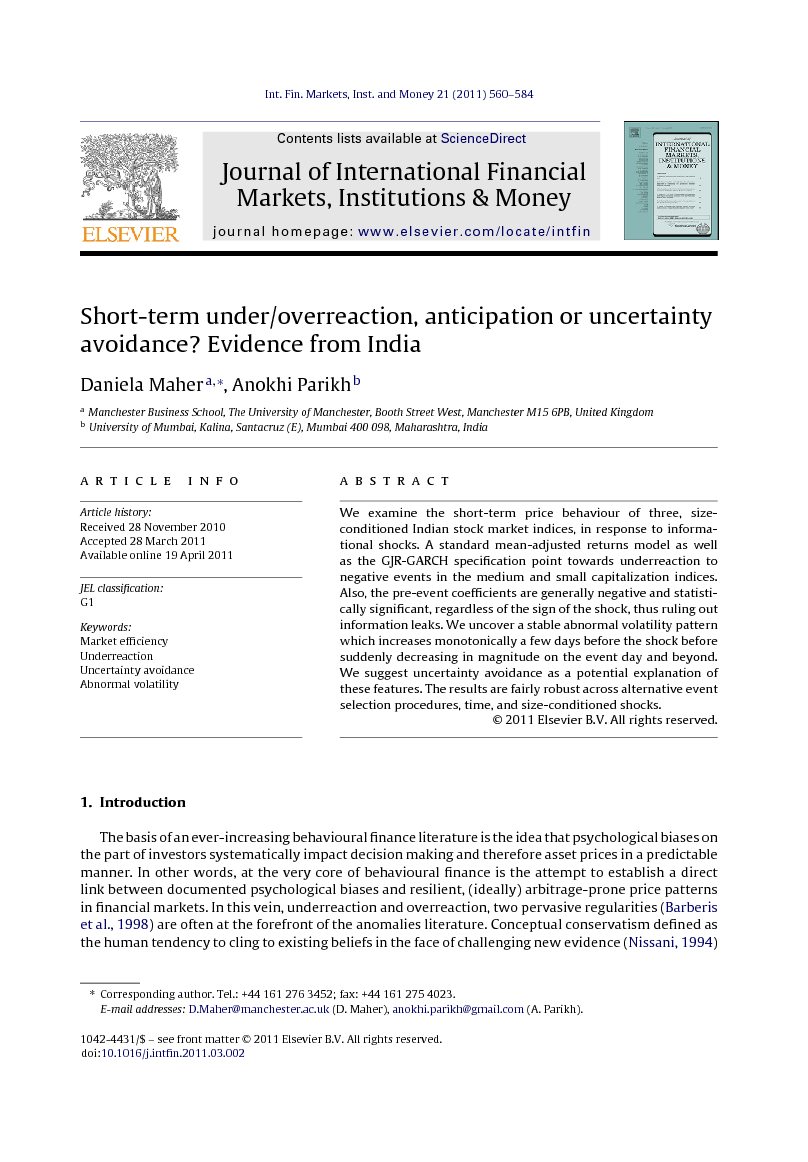 We examine the short-term price behaviour of three, size-conditioned Indian stock market indices, in response to informational shocks. A standard mean-adjusted returns model as well as the GJR-GARCH specification point towards underreaction to negative events in the medium and small capitalization indices. Also, the pre-event coefficients are generally negative and statistically significant, regardless of the sign of the shock, thus ruling out information leaks. We uncover a stable abnormal volatility pattern which increases monotonically a few days before the shock before suddenly decreasing in magnitude on the event day and beyond. We suggest uncertainty avoidance as a potential explanation of these features. The results are fairly robust across alternative event selection procedures, time, and size-conditioned shocks.

The purpose of this study is to shed some light on the way investors on the Indian stock exchange react to market events. We are conditioning our investigation on several factors such as market capitalization, crisis vs non-crisis periods, and magnitude of shocks. We employ two different approaches, namely a CAR analysis based on a mean-adjusted returns model and a GJR-Garch model. We find evidence of post-event underreaction to negative events, detected mainly in the medium and smaller capitalization stocks, in all periods except post-crisis. During post-crisis, the market appears to over-react to bad news. On the other hand, the market seems to react more efficiently to positive events, overall. There is, however, weak evidence of overreaction to good news before the 2008 crisis which turns into underreaction to good news after the crisis. This conclusion is endorsed by the asymmetric GARCH approach. Equally, the pre-event CARs tend to be negative and statistically significant, independent of the particular methodology employed. Moreover, their corresponding abnormal volatility coefficients are significant, positive, and monotonically increasing up until the day before the event day and then monotonically decreasing from time 0 until up to 10 days following the event. We make use of the fact that, in the case of BSE Sensex, the analysis can be significantly extended beyond the original period, in order to subject our results to a time-test. Indeed, the results for Sensex over the period 1991–2010 validate the previous pattern. Moreover, conditioning events on the size of the shock does not alter the results. If anything, larger shocks give rise to larger pre-event volatility estimates as in Mazouz et al. (2009). We also document a uni-directional Granger causality between volume and volatility in the sense that volume does Granger-cause volatility but not the other way around. Also, we document a statistically significant and abnormally high trading volume in a large proportion of pre-event days, suggesting an increased traders’ appetite for selling (as returns tend to be negative and significant on these days). This result is confirmed by two alternative datasets: the total volume of Sensex shares being traded on pre-event days as well as the total number of Nifty futures contracts being traded on pre-event days. Moreover, a simple trend analysis looking at daily changes in price, volume, and open interest, suggests selling tendencies (for hedging, speculation, or long covering purposes) in pre-event days, all of which are indicative of market unrest. We suggest this pattern can be interpreted by reference to one particular psychological bias, namely uncertainty avoidance. In periods of heightened uncertainty, a representative group of market participants having low uncertainty tolerance are compelled to act (trade), driving up volatility and potentially driving down returns. As more information is released, uncertainty will subside and the market will undergo a correction (up or down) after which it remains largely efficient. Given that, on an ex ante basis, it is impossible to predict the individual events and their nature, this still conforms to a broad notion of market efficiency. We reconcile this hypothesis with the suggestion in Hofstede (2001) that the Indian market scores below average on a world uncertainty-avoidance scale.