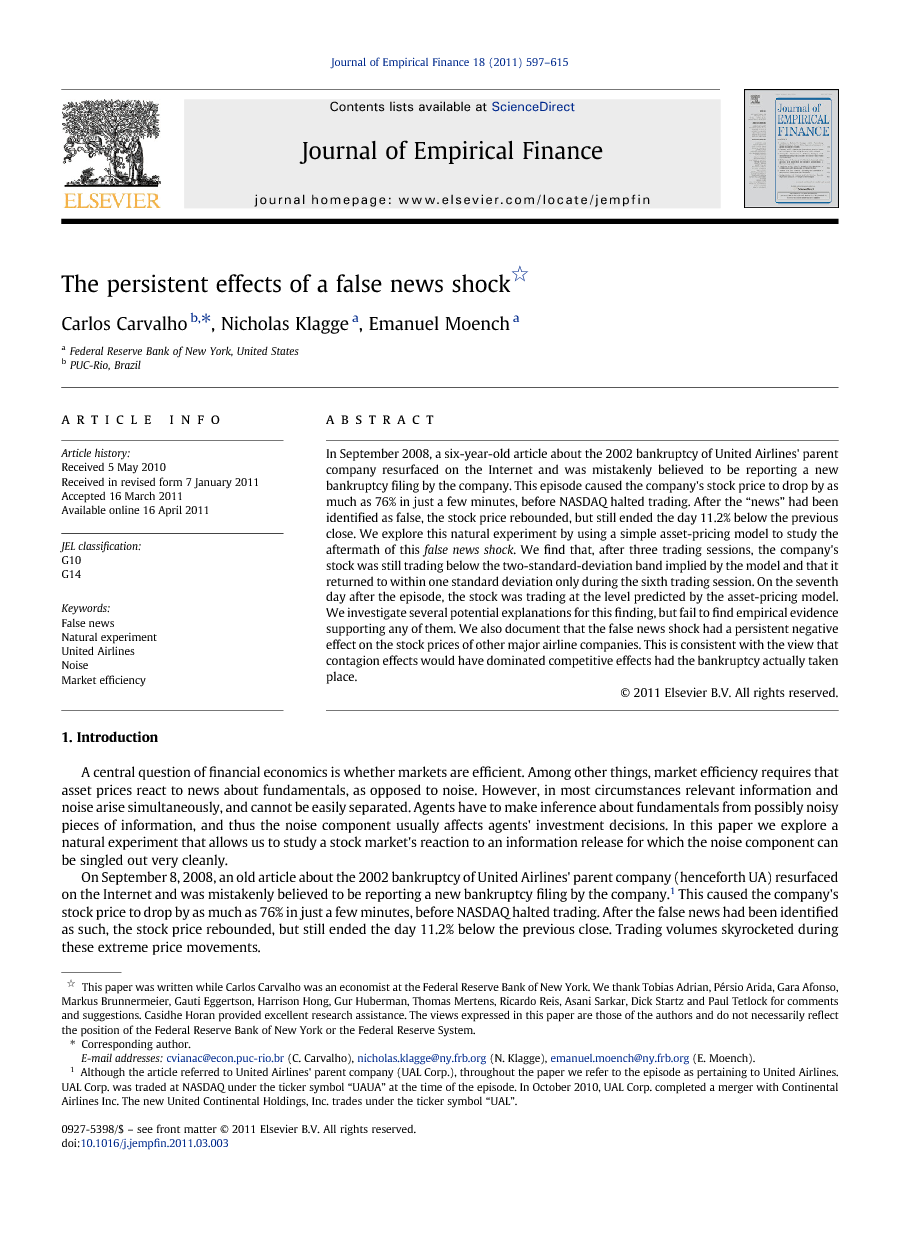 In September 2008, a six-year-old article about the 2002 bankruptcy of United Airlines' parent company resurfaced on the Internet and was mistakenly believed to be reporting a new bankruptcy filing by the company. This episode caused the company's stock price to drop by as much as 76% in just a few minutes, before NASDAQ halted trading. After the “news” had been identified as false, the stock price rebounded, but still ended the day 11.2% below the previous close. We explore this natural experiment by using a simple asset-pricing model to study the aftermath of this false news shock. We find that, after three trading sessions, the company's stock was still trading below the two-standard-deviation band implied by the model and that it returned to within one standard deviation only during the sixth trading session. On the seventh day after the episode, the stock was trading at the level predicted by the asset-pricing model. We investigate several potential explanations for this finding, but fail to find empirical evidence supporting any of them. We also document that the false news shock had a persistent negative effect on the stock prices of other major airline companies. This is consistent with the view that contagion effects would have dominated competitive effects had the bankruptcy actually taken place.

We explore a natural experiment to study the impact of a false news shock on the stock price of United Airlines. We find that the shock had a persistent effect on the level of UA's stock price: it took six trading sessions for the stock to return to within one standard error of the model-implied counterfactual path. On the seventh trading session after the episode, and for quite a few days thereafter, UA's stock price was essentially trading at the counterfactual path implied by our factor model. We provide an in-depth analysis of two theories which could potentially rationalize our findings. According to the first, disrupted liquidity during a transition process might have resulted in the slow return of the share price back to its fundamental level. We do not find evidence of poor liquidity on the days following the false news shock. The second theory relies on ambiguity-averse traders as an explanation of a slow recovery back to the level implied by the asset-pricing model. We assess empirically whether the predictions of this theory are born out by the data and find little supportive evidence. We also consider the hypothesis that the slow recovery of UA's stock price can be explained by the firm's linkages with the U.S. financial sector which itself was in turmoil in September 2008. While we do find a significant correlation between UA's returns and the returns on financial sector stocks prior to the event, the counterfactual path implied by a model augmented with a financial factor does not alter our conclusion that it took unusually long for UA's share price to return to the level predicted by the model. A sudden bankruptcy of a firm may have contagious as well as competitive effects on other firms within the same industry (see e.g. Lang and Stulz, 1992). We study the behavior of other major U.S. airlines and find a similar pattern for their stock prices on the days after the false news event. This finding leads us to argue that contagion effects would have dominated the competitive effects — had the bankruptcy actually taken place. It is difficult to find other episodes that could be similarly characterized as a false news shock. There are a number of at first seemingly related cases that were subsequently shown to involve a fraud or hoax. In such cases, false news was deliberately produced to impact the stock price. This changes the nature of the trading environment, since some market participants trade with knowledge of the false news. It is reasonable to assume that the hoaxer takes advantage of the induced price movements by trading in the stock or its derivatives. One should thus expect a more complete reversal of the price movements produced by the false news, as the hoaxer trades to his or her advantage. Some prominent examples of false news due to fraud involved Pairgain Technologies (on April 7, 1999; the company later merged with ADC Telecommunications in 2000), and Emulex Corporation (on August 25, 2000). Curiously, despite reports that the frauds became apparent before the end of the respective trading sessions, in both cases the stock price still ended the day moving “in the direction” that the false information would have justified.19 Despite their different nature, we see these episodes as suggestive that our findings would generalize to other false news shocks. Finally, one may reasonably argue that one week is not a long enough spell for the misvaluation of stocks to have relevant economic effects — beyond gains and losses by traders and investors. However, this is how long it took for the effects of a pure false news shock to dissipate. In most circumstances, relevant information (“signal”) and noise arise simultaneously, and cannot be so easily separated.