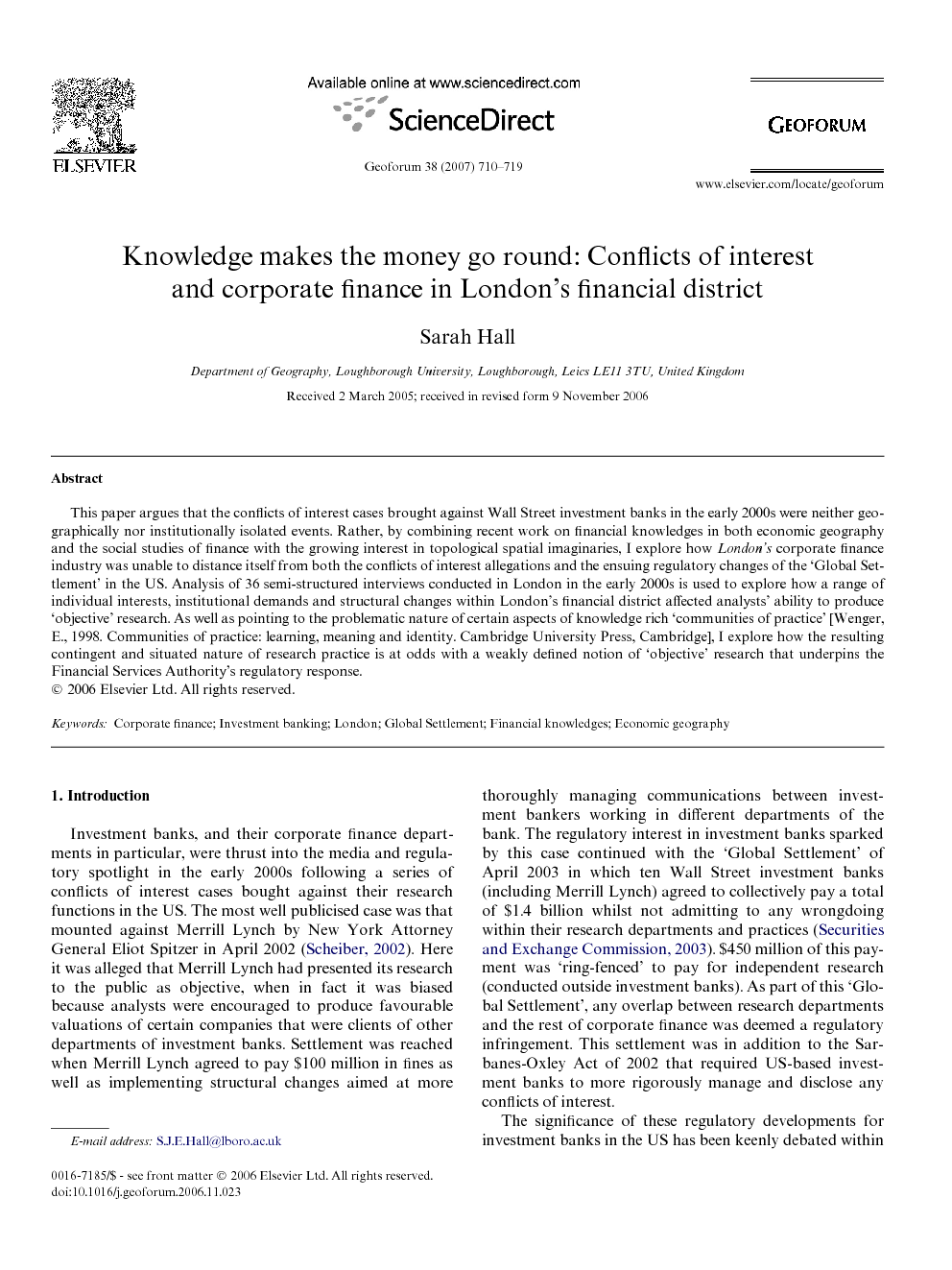 This paper argues that the conflicts of interest cases brought against Wall Street investment banks in the early 2000s were neither geographically nor institutionally isolated events. Rather, by combining recent work on financial knowledges in both economic geography and the social studies of finance with the growing interest in topological spatial imaginaries, I explore how London’s corporate finance industry was unable to distance itself from both the conflicts of interest allegations and the ensuing regulatory changes of the ‘Global Settlement’ in the US. Analysis of 36 semi-structured interviews conducted in London in the early 2000s is used to explore how a range of individual interests, institutional demands and structural changes within London’s financial district affected analysts’ ability to produce ‘objective’ research. As well as pointing to the problematic nature of certain aspects of knowledge rich ‘communities of practice’ [Wenger, E., 1998. Communities of practice: learning, meaning and identity. Cambridge University Press, Cambridge], I explore how the resulting contingent and situated nature of research practice is at odds with a weakly defined notion of ‘objective’ research that underpins the Financial Services Authority’s regulatory response.

Investment banks, and their corporate finance departments in particular, were thrust into the media and regulatory spotlight in the early 2000s following a series of conflicts of interest cases bought against their research functions in the US. The most well publicised case was that mounted against Merrill Lynch by New York Attorney General Eliot Spitzer in April 2002 (Scheiber, 2002). Here it was alleged that Merrill Lynch had presented its research to the public as objective, when in fact it was biased because analysts were encouraged to produce favourable valuations of certain companies that were clients of other departments of investment banks. Settlement was reached when Merrill Lynch agreed to pay $100 million in fines as well as implementing structural changes aimed at more thoroughly managing communications between investment bankers working in different departments of the bank. The regulatory interest in investment banks sparked by this case continued with the ‘Global Settlement’ of April 2003 in which ten Wall Street investment banks (including Merrill Lynch) agreed to collectively pay a total of $1.4 billion whilst not admitting to any wrongdoing within their research departments and practices (Securities and Exchange Commission, 2003). $450 million of this payment was ‘ring-fenced’ to pay for independent research (conducted outside investment banks). As part of this ‘Global Settlement’, any overlap between research departments and the rest of corporate finance was deemed a regulatory infringement. This settlement was in addition to the Sarbanes-Oxley Act of 2002 that required US-based investment banks to more rigorously manage and disclose any conflicts of interest. The significance of these regulatory developments for investment banks in the US has been keenly debated within both policy and press circles (see, for example, Swedberg, 2004). Some commentators have suggested that the fines and structural changes within banks are relatively superficial (Augar, 2005). For instance, under claims that the disclosure of potential conflicts of interest have been significantly strengthened, research reports simply have to include a statement that there may be conflicts of interest involved in the production of the report (Wells, 2004). However, others have suggested that the changes amount to a more substantial ‘regulatory blizzard’ (Parker, 2004), with research departments not only being required to be physically separated within investment bank offices, but also to have separate reporting lines, budgets and legal and compliance staff. Indeed, it appears that the significance of the Global Settlement lies less in the nature of the specific organisational changes demanded by the SEC but more in the increasingly stringent regulatory landscape more broadly that it has heralded (Wolkoff, 2004). This is exemplified by the emergence of a nascent ‘regulatory industry’ with management consultants specifically offering services to assist financial institutions meet the new regulatory requirements (see, for example, CapGemini, 2004). However, economic geographers, and social scientists more generally, have comparatively neglected the implications of the conflicts of interest and the concomitant regulatory changes beyond the confines of Wall Street. In response to this oversight, this paper uses fieldwork conducted in London’s corporate finance industry (see Appendix) to suggest that the conflicts of interest cases brought against Wall Street investment banks in the early 2000s were neither geographically nor institutionally isolated events. I combine work on financial knowledges in both economic geography and the social studies of finance with recent work on ‘relational proximity’ (Amin and Cohendet, 2004) and topological spatial imaginaries more broadly (Amin, 2002 and Murdoch, 1998) to make two related arguments. First, I suggest that it was the nature of research practice within investment banking research communities that prevented the conflicts of interest being scripted as solely affecting US based investment banks. This is in contrast to earlier crises that have affected London’s financial services industry such as the collapse of Barings Bank (Tickell, 1996) and Robert Maxwell’s use of the Mirror Group’s pension plans to support his own business ventures (Clark, 1997). In these cases, individual actors (be they people or firms) were labelled by the industry (with varying degrees of success) as scapegoats who were not symptomatic of more widespread practices. Second, I consider how these relational geographies are also important in understanding the regulatory response to the conflicts of interest cases. Here, I explore how the Financial Services Authority (FSA) felt compelled to take seriously the regulatory changes and allegations made in the US whilst simultaneously continuing London’s historic commitment to maintaining a ‘soft touch’ regulatory environment. The result is a regulatory commitment to ‘objective’ and ‘impartial’ research that is seemingly at odds with the highly contingent and situated nature of contemporary corporate finance research practices uncovered by my fieldwork. My argument is developed over five further sections. First, I detail the nature of the conflicts of interest, underscoring the significance of the investment banking organisational model to their existence. Second, I consider the central role of trans-Atlantic financial ‘communities of practice’ (Wenger, 1998) to these conflicts of interest cases, before third, using this theoretical framework to explore how London’s corporate finance industry was unable to distance itself from the conflicts of interest in the US, either geographically or institutionally. Fourth, I outline the problematic nature of the Financial Services Authority regulatory response before finally considering how the research reported in this paper contributes to understandings of the economic geography of financial services and the ‘knowledge based economy’ more broadly.

This paper has taken inspiration from economic geography research that has engaged with financial crises and scandals (Tickell, 1996, Clark, 1997 and Beaverstock and Doel, 2001) to study the role in, and responses of, London’s corporate finance community to the conflicts of interest cases that were brought against investment banks in the US in the early 2000s, a financial scandal that has received comparatively little attention from social scientists, including economic geographers (although see Wrigley et al., 2003 and Swedberg, 2004). In particular, I have argued that a series of proximate and distanciated relations within London and between London and the US, hinging on different types of knowledges and their production, prevented London’s investment banking industry distancing itself from the conflicts of interest highlighted by Eliot Spitzer, resulting in regulatory changes on both sides of the Atlantic. Given the centrality of financial knowledges to both the conflicts of interest cases themselves, and the ensuing regulatory changes, I want to conclude by considering the implications of this argument for theories of economic and financial knowledges in economic geography and the social sciences more broadly. In particular, the role of financial knowledges in the conflicts of interest cases provides an interesting corollary to work in economic geography and economic sociology that has underscored the ‘strength of weak ties’ in knowledge rich economies (Granovetter, 1973 and Grabher, 1993). According to this argument, relations that “score rather low with regard to the amount of time, emotional intensity, intimacy […] and reciprocal services” (Grabher, 2006, p. 176) are important for economic innovation and growth since they are more likely to distribute new forms of knowledge and practice to a wide number of actors. In part, my research findings support this argument since the difficulties associated with producing objective research in London in the early 2000s can be explained partly by the restricted nature of the research pool in the City at the time – a community that relied on a dense web of strong ties. However, this is only part of the story. In many ways, the spatially distanciated working relationships that came together on a project-by-project basis through corporate finance transactions were at the heart of London’s inability to distance itself from the conflicts of interest cases in the US. These relations tended to combine both strong and weak elements, since although they were built around a series of intense relations for the duration of the project, involving typically daily contact, they also had characteristics of ‘weak ties’ by virtue of their restricted duration and the limited amount of non-work socialising contained within them. As such, the research presented in this paper points to the potential limitations of both strong and weak ties since both were implicated in London’s role in the conflicts of interest cases in the early 2000s. Moreover, the fact that relations between London and New York were mediated through both strong and weak ties points to the complex geographies associated with knowledge rich communities. In particular, my research supports recent arguments that there is not necessarily a causal relationship between the spatial reach of knowledge networks and their intensity such that dense networks are spatially limited whilst less intense networks are spatially distanciated (see, for example, Amin, 2002). However, beyond these conceptual observations, London’s inability to distance itself from the conflicts of interest cases is also significant since it points to a subtle change in the regulatory landscape in the City as the FSA attempts to tread a fine line between ensuring business professionalism and accountability, on the one hand, whilst maintaining London’s competitive edge as an international financial centre that has often been found in its comparatively low levels of regulation, on the other. More research is needed to explore how this changing regulatory environment has affected London’s investment banking industry as business levels increased following the completion of the fieldwork that forms the basis of this paper, particularly since restoring regulatory, public and media confidence in research remains one of the most significance challenges for the investment banking industry on both sides of the Atlantic.