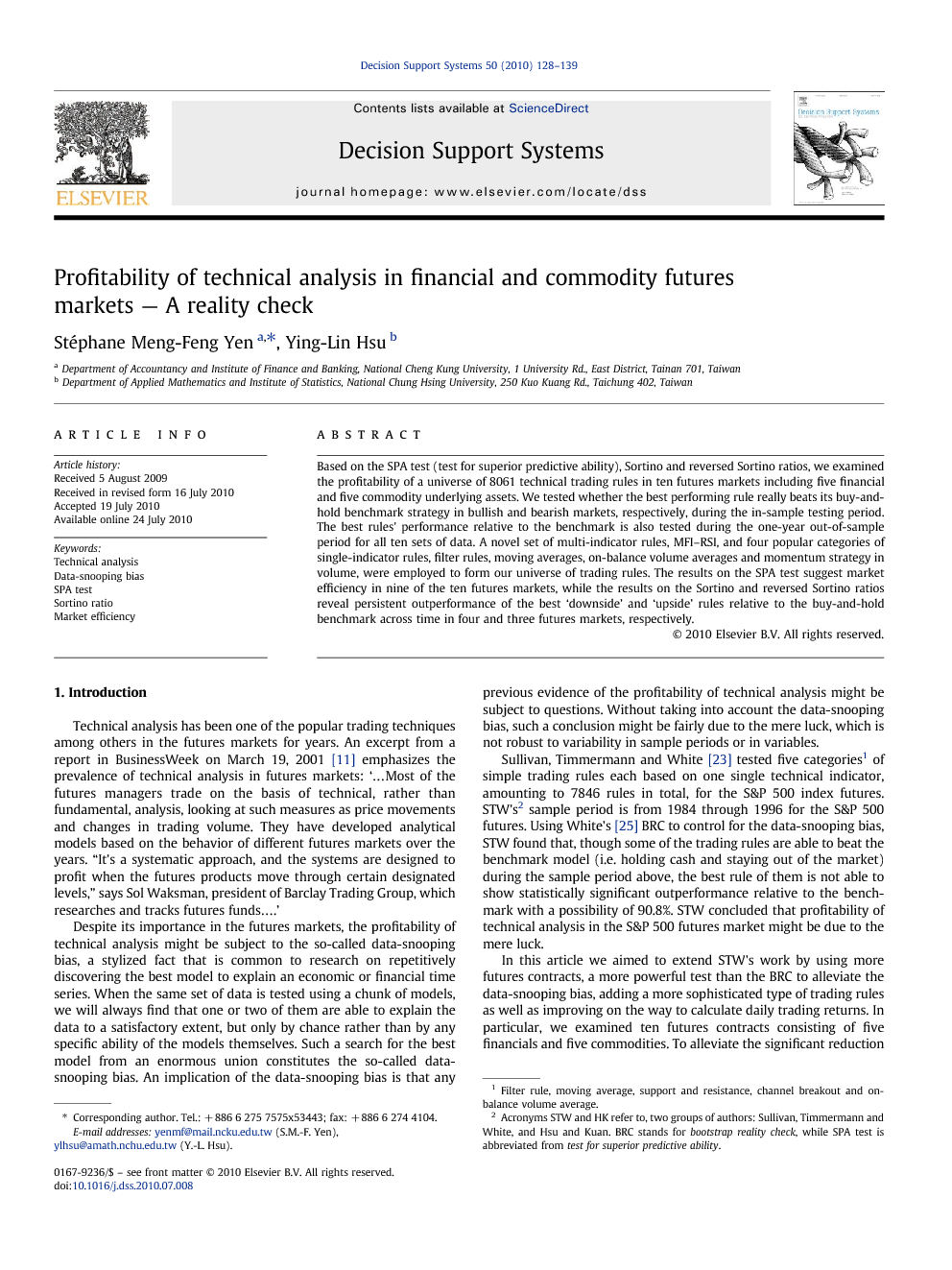 Based on the SPA test (test for superior predictive ability), Sortino and reversed Sortino ratios, we examined the profitability of a universe of 8061 technical trading rules in ten futures markets including five financial and five commodity underlying assets. We tested whether the best performing rule really beats its buy-and-hold benchmark strategy in bullish and bearish markets, respectively, during the in-sample testing period. The best rules' performance relative to the benchmark is also tested during the one-year out-of-sample period for all ten sets of data. A novel set of multi-indicator rules, MFI–RSI, and four popular categories of single-indicator rules, filter rules, moving averages, on-balance volume averages and momentum strategy in volume, were employed to form our universe of trading rules. The results on the SPA test suggest market efficiency in nine of the ten futures markets, while the results on the Sortino and reversed Sortino ratios reveal persistent outperformance of the best ‘downside’ and ‘upside’ rules relative to the buy-and-hold benchmark across time in four and three futures markets, respectively.

Our SPA test results tend to suggest market efficiency in that the universe of our 8061 trading rules is generally unable to beat the buy-and-hold strategy although they were selected from among the most-profitable types of technical trading rules in previous studies. Only one of the nine ‘real’ (i.e. statistically significant) outperformers identified from the most recent testing period, i.e. an MSV rule in the live cattle futures market, consistently beats the benchmark over the one-year out-of-sample period. However, the results based on the Sortino and reversed Sortino ratios are not completely in accord with what we found with the SPA test. The best ‘downside’ rule and the best ‘upside’ rule selected from the entire in-sample testing period are both able to generate a rate of return exceeding the benchmark over the one-year out-of-sample period for a few contracts. Despite the inconsistency between the two sets of results on performance persistence of the trading rules, we found that the best rules screened by both methods come from the MFI–RSI and MSV categories, both using the volume information. Although our empirical results tend to deny the profitability of our 8061 rules in many of the ten futures markets, it might be overreaching to imply the deficiency of technical analysis in the futures markets. As technical analysis continues to develop rapidly, new trading rules and strategies employed by futures market practitioners might have been much more complicated than those used in this study. It is worthwhile to reexamine this issue when more techniques are revealed to the public. Moreover, the SPA test used to control for the data-snooping bias can be improved to examine not only the most-profitable rule but also all others which significantly outperform the benchmark. Testing the performance persistence of all outperformers in the out-of-sample period will give a more general picture of the profitability of technical analysis in the futures markets. Two recently developed statistical techniques, the stepwise reality check (SRC) [20] and the stepwise test for superior predictive ability (SSPA test) [15], might contribute to this issue.