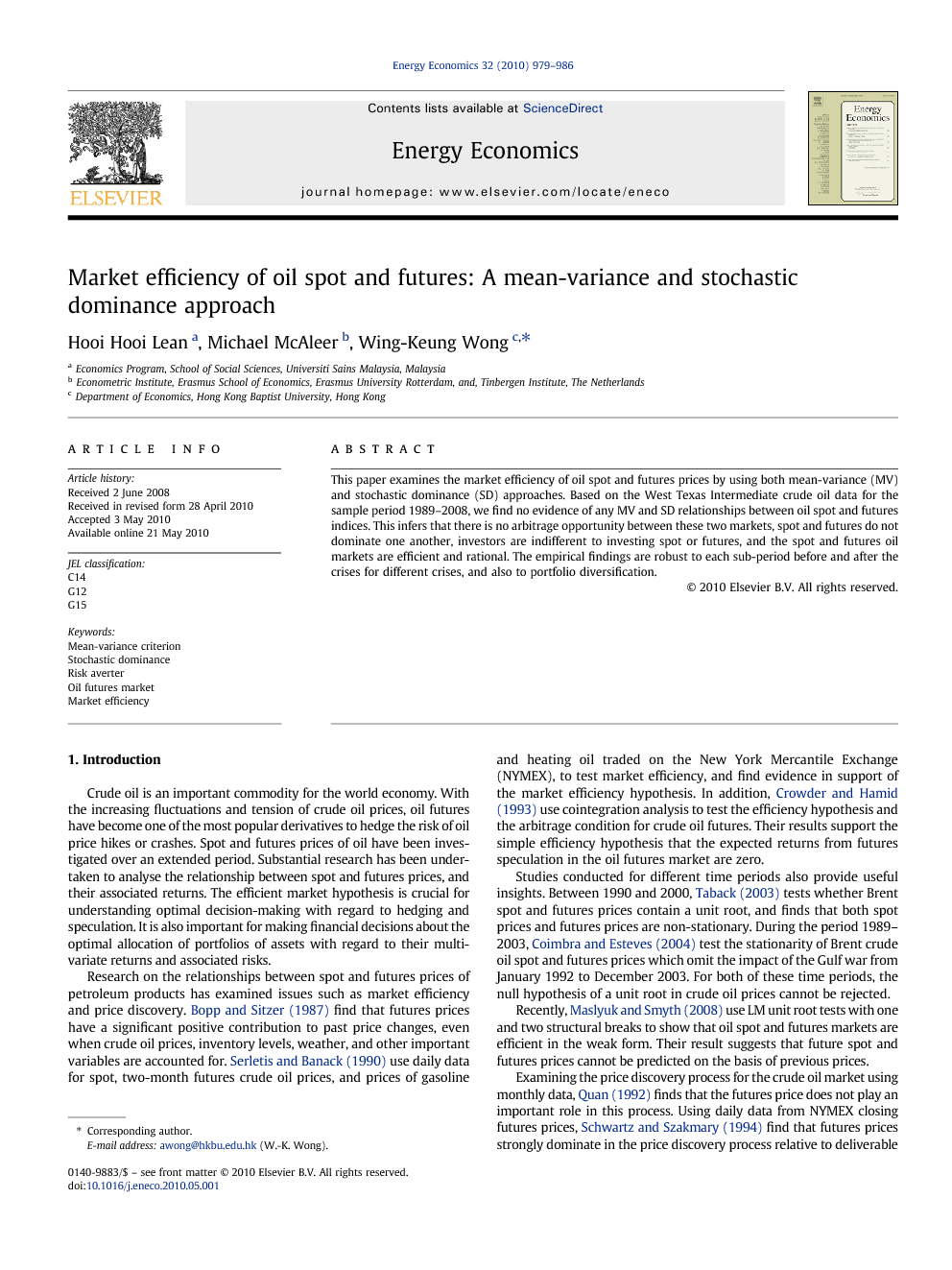 This paper examines the market efficiency of oil spot and futures prices by using both mean-variance (MV) and stochastic dominance (SD) approaches. Based on the West Texas Intermediate crude oil data for the sample period 1989–2008, we find no evidence of any MV and SD relationships between oil spot and futures indices. This infers that there is no arbitrage opportunity between these two markets, spot and futures do not dominate one another, investors are indifferent to investing spot or futures, and the spot and futures oil markets are efficient and rational. The empirical findings are robust to each sub-period before and after the crises for different crises, and also to portfolio diversification.

This paper introduced the SD approach to examine the performance of spot and futures, and investors' behaviour in these markets, by analysing the entire period and the sub-periods, as well as different convex combinations of the portfolios of spot and futures. Our empirical findings suggested that there is no arbitrage opportunity between spot and futures oil, spot and futures do not dominate one another, investors are indifferent from investing in spot or futures, and the spot and futures oil markets are efficient and rational for the WTI crude oil markets. We note that Moosa and Al-Loughani (1995) showed that both arbitrage and speculation play a role in determining oil futures prices, but the role of arbitrage is dominant. Our result of no arbitrage opportunity in these markets is contrary to the findings of Moosa and Al-Loughani (1995). This could arise from the different methodology used by Moosa and Al-Loughani (1995), or it may be due to the shorter period they examined, namely January 1986 to December 1991. As discussed in Section 2.3, in a short period, there may exist arbitrage opportunities. If the market is efficient, arbitrage opportunities will disappear in the long run. It should be noted that the MV approach and the CAPM statistics used in the paper have a limitation in that they require the assumption of normality. One may consider applying other techniques, such as the established CAPM-MV theory with non-Gaussian errors (for example, Student-t or multi-modal mixtures of normals) ( Chamberlain, 1983 and Beaulieu et al., 2007). Value-at-Risk (VaR) and CVaR are other measures for selecting investment positions. We note that the conclusions drawn from the SD and MV results in the paper are consistent. In addition, the conclusion drawn from SD is equivalent to many other non-normal approaches. For example, it is well known that the finding from FSD is equivalent to that from VaR, and the finding from SSD is equivalent to that from CVaR ( Ogryczak and Ruszcznski, 2002, Leitner, 2005 and Ma and Wong, 2006). Thus, it is not necessary to consider other non-normal approaches. In addition, one could consider examining other SD relationships, such as descending SD (DSD) for risk seekers (Li and Wong, 1999 and Wong and Li, 1999), and the prospect SD (PSD) and Markowitz SD (MSD) models for investors with S-shaped and reverse S-shaped utilities, respectively (Levy and Levy, 2002, Levy and Levy, 2004 and Wong and Ma, 2008). We do not conduct these alternative approaches because, when no SD relationship is found using the traditional SD approach for risk averters, the conclusions drawn from DSD, MSD, and PSD are equivalent to those drawn from traditional SD for risk averters (Sriboonchita et al., 2009). Finally, we note that the SD approach introduced in this paper provides useful information to investors for decision-making in oil markets. However, investors could also apply other techniques to study the market to provide additional information. For example, Silvapulle and Moosa (1999) find a bi-directional non-linear causality effect between oil spot and futures prices, thereby suggesting that both markets react simultaneously to new information. Although the SD approach does not provide such causality information, the causality test also cannot provide information drawn from the SD approach. Thus, if one would like to draw a more complete picture about oil markets, they should apply a wider range of tools to analyse the market.