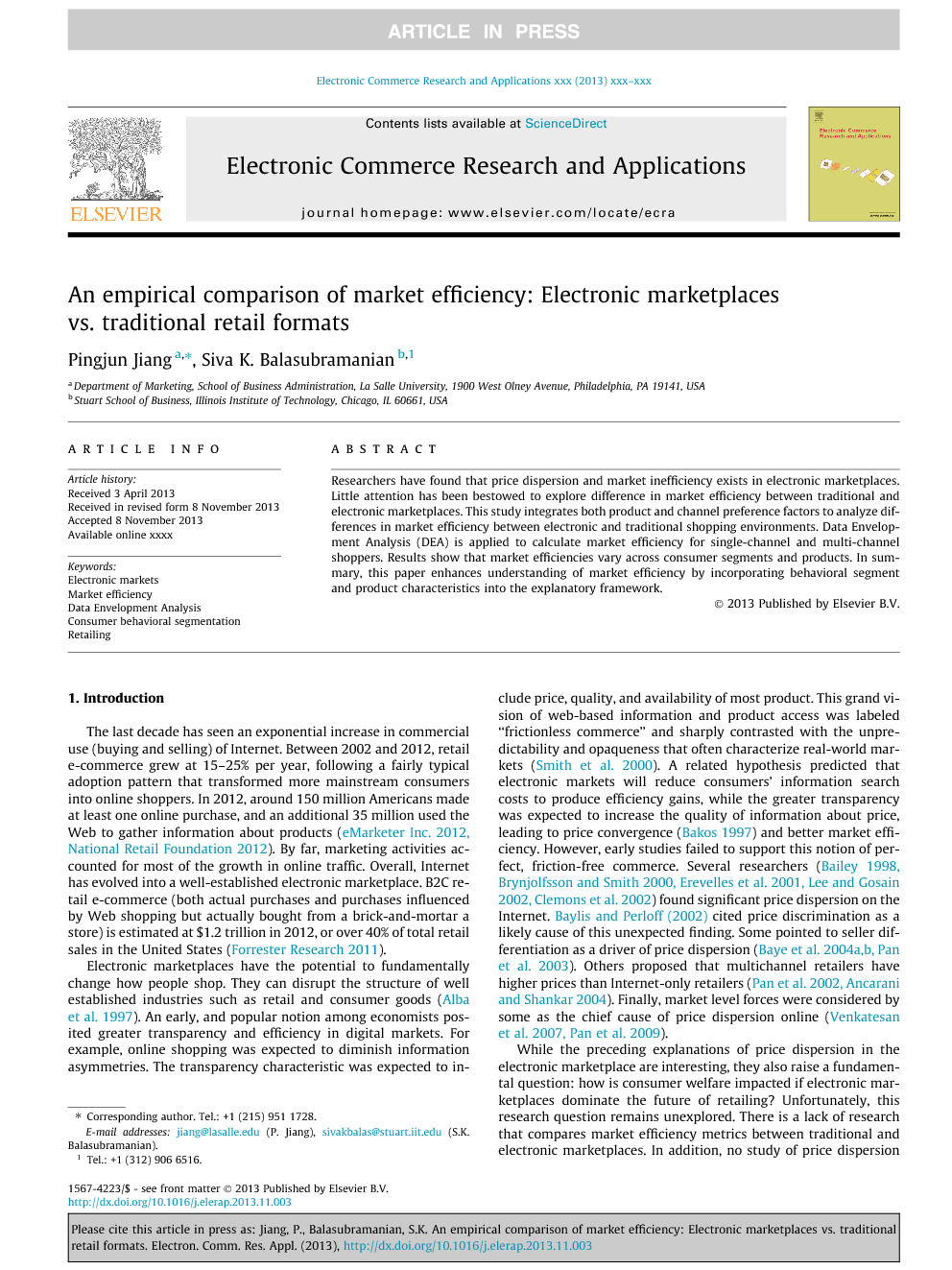 The last decade has seen an exponential increase in commercial use (buying and selling) of Internet. Between 2002 and 2012, retail e-commerce grew at 15–25% per year, following a fairly typical adoption pattern that transformed more mainstream consumers into online shoppers. In 2012, around 150 million Americans made at least one online purchase, and an additional 35 million used the Web to gather information about products (eMarketer Inc., 2012 and National Retail Foundation, 2012). By far, marketing activities accounted for most of the growth in online traffic. Overall, Internet has evolved into a well-established electronic marketplace. B2C retail e-commerce (both actual purchases and purchases influenced by Web shopping but actually bought from a brick-and-mortar a store) is estimated at $1.2 trillion in 2012, or over 40% of total retail sales in the United States (Forrester Research 2011). Electronic marketplaces have the potential to fundamentally change how people shop. They can disrupt the structure of well established industries such as retail and consumer goods (Alba et al. 1997). An early, and popular notion among economists posited greater transparency and efficiency in digital markets. For example, online shopping was expected to diminish information asymmetries. The transparency characteristic was expected to include price, quality, and availability of most product. This grand vision of web-based information and product access was labeled “frictionless commerce” and sharply contrasted with the unpredictability and opaqueness that often characterize real-world markets (Smith et al. 2000). A related hypothesis predicted that electronic markets will reduce consumers’ information search costs to produce efficiency gains, while the greater transparency was expected to increase the quality of information about price, leading to price convergence (Bakos 1997) and better market efficiency. However, early studies failed to support this notion of perfect, friction-free commerce. Several researchers (Bailey, 1998, Brynjolfsson and Smith, 2000, Erevelles et al., 2001, Lee and Gosain, 2002 and Clemons et al., 2002) found significant price dispersion on the Internet. Baylis and Perloff (2002) cited price discrimination as a likely cause of this unexpected finding. Some pointed to seller differentiation as a driver of price dispersion (Baye et al., 2004a, Baye et al., 2004b and Pan et al., 2003). Others proposed that multichannel retailers have higher prices than Internet-only retailers (Pan et al., 2002 and Ancarani and Shankar, 2004). Finally, market level forces were considered by some as the chief cause of price dispersion online (Venkatesan et al., 2007 and Pan et al., 2009). While the preceding explanations of price dispersion in the electronic marketplace are interesting, they also raise a fundamental question: how is consumer welfare impacted if electronic marketplaces dominate the future of retailing? Unfortunately, this research question remains unexplored. There is a lack of research that compares market efficiency metrics between traditional and electronic marketplaces. In addition, no study of price dispersion or market efficiency has explicitly incorporated behavioral segmentation based on consumers’ single or multi-channel shopping preference. Furthermore, despite evidence (Walter et al. 2006) that price variance attributable to a variable may differ across products, the price dispersion literature has not fully examined differences across products. Therefore, the main objectives of our study are as follows: (1) Integrate both product and channel preference factors to explain differences in market efficiency when electronic and traditional shopping environments coexist. (2) Compare market efficiency across online-only shoppers, offline-only shoppers, and multichannel shoppers; investigate if differences in market efficiency across these three groups also vary by product. In particular, how do product factors influence market efficiency when comparing traditional and electronic marketplaces? (3) Explore how the electronic marketplace affects the competition structure among brands within an industry, i.e., how the efficiency frontiers for brands change when a new electronic marketplace option coexists with the traditional retail format. Our study contributes to the literature on market efficiency in the electronic marketplace by adding new knowledge or extending existing knowledge. We introduce behavioral segmentation into marketing efficiency calculations. In addition, we explore efficiency changes by consumer segments for different products along a set of key product characteristics. We also discuss changes in efficiency frontiers. Our study is structured as follows. We begin with a review of the literature on market efficiency in the context of price dispersion in traditional (offline) and electronic (online) marketplaces. We then present an exploratory framework that incorporates behavioral segmentation. The next section describes the research method, followed by our analysis. We discuss findings, their managerial implications, summarize our conclusions and limitations, and provide guidance for future research.

By distinguishing shoppers via behavioral segmentation, and by assessing market efficiency within each consumer segment’s defined market boundary, a unique contribution of this study is to compare market efficiency across online-only shoppers, offline-only shoppers, and multichannel shoppers. The results reaffirm earlier findings on price dispersion that persistent market inefficiency exists in markets that comprise either single channel shoppers or multichannel shoppers. In addition, we shed new light on whether market efficiency varies across products. The electronic marketplace increases market efficiency significantly for high-involvement products; in contrast, low-involvement products are characterized by lower market efficiency in the electronic marketplace. Furthermore, products with larger number of attributes gain more efficiency online, and the products with a large proportion of shipping and handling costs (relative to total price) are likely to show diminished efficiency in online retail settings. Finally, our study analyzes efficiency scores for single-channel (offline-only or online-only shoppers) and multichannel (integrated hybrid marketplace) settings and finds three major patterns: (1) online brands dominate the same brands offline; (2) other online brands dominate the former efficient offline brands; and (3) no changes for the previously efficient brands. Future research should relate the market share changes of brands with changes in their efficiency scores, thereby enabling the prediction of market share of each brand based on inputs derived from efficiency – frontier oriented competition structure.