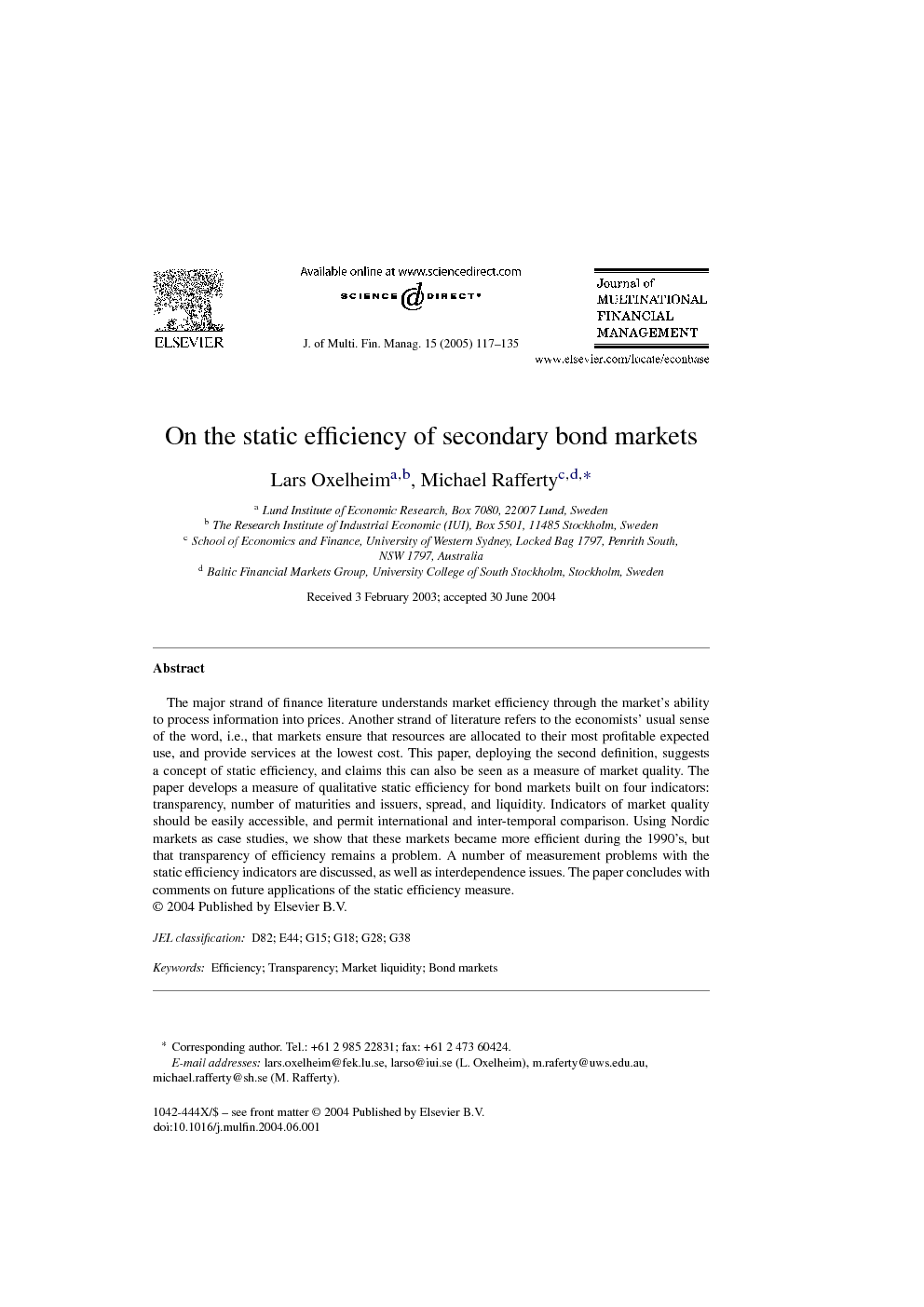 The major strand of finance literature understands market efficiency through the market's ability to process information into prices. Another strand of literature refers to the economists’ usual sense of the word, i.e., that markets ensure that resources are allocated to their most profitable expected use, and provide services at the lowest cost. This paper, deploying the second definition, suggests a concept of static efficiency, and claims this can also be seen as a measure of market quality. The paper develops a measure of qualitative static efficiency for bond markets built on four indicators: transparency, number of maturities and issuers, spread, and liquidity. Indicators of market quality should be easily accessible, and permit international and inter-temporal comparison. Using Nordic markets as case studies, we show that these markets became more efficient during the 1990's, but that transparency of efficiency remains a problem. A number of measurement problems with the static efficiency indicators are discussed, as well as interdependence issues. The paper concludes with comments on future applications of the static efficiency measure.

Recent crises in emerging markets and scandals in developed capital markets have raised issues about the transparency and quality of markets. In finance, such issues have typically been analyzed within the broader context of market efficiency. Efficiency in the context of capital markets has been defined in many ways, but a standard way has been to define it in terms of what sort of information is available to market participants, and how they handle that information. According to this view, an efficient bond market is one where bond prices accurately reflect all available information, and quickly adjusts to new information. It is assumed within the efficient markets hypothesis, that market participants rationally formulate their bond buying and selling decisions based on available information about bond prices and their relevant determinants.1 But markets are also economic institutions that require resources and economic agents. Efficient markets in this wider economic sense are involved in allocating resources to their most profitable use and in cost effective ways.2 This paper is concerned with one aspect of the wider economic sense of efficiency through the concept of static efficiency in the context of secondary bond markets. The concept of static efficiency is aimed at improving the international and inter-temporal comparability of bond market quality. The degree of comparability between markets and over time is currently very poor. It is now well known that there is often a trade-off to be made between different qualitative characteristics, and no single indicator of qualitative efficiency can adequately reflect market quality. We therefore suggest a composite measure of static efficiency consisting of four qualitative indicators: transparency, number of maturities and issuers, spread, and liquidity to depict a bond market's main structural or operational features. Burns (1979) earlier suggested the need for a composite measure of capital market efficiency, and proposed the concept of operational efficiency employing three indicators; liquidity, orderliness, and organizational quality. This measure was, however, developed primarily for equity markets and does not translate easily to bond markets. The concept of static efficiency might be usefully deployed to bond markets for some questions of interest to market participants and researchers, particularly where qualitative aspects of efficiency are considered. The relevant concept employed should then depend on the particular question/s being asked. The indicators of static efficiency are seen here as reflecting the quality of a secondary market. 3 While this dimension to market efficiency is often seen as most important in times when markets are subject to shocks or discontinuities (such as October 1987, the Russian currency crisis, the Asian financial crisis and 11 September, 2001), knowledge about static efficiency is also important to institutional investors, and to corporate issuers. A choice will sometimes have to be made between say bonds offering the same payoff in markets similar in all respects except in one or more of the qualitative aspects addressed here. Investors and issuers need easily accessible information about the quality of different secondary markets. Currently that information is not available in a way that permits international or often even inter-temporal comparison of secondary bond markets. The research issue of this paper is to develop a measure of market quality and to address the implementation problems involving how to make the measure, or at least the indicators it is built on, accessible and comparable across markets. Research on market quality has also rarely considered the relative importance of the fixed income market. This is largely because bond data is not easily collected (Sarig and Warga, 1989 and Goodhart and O’Hara, 1997). Financial researchers have long been plagued by the paucity of data on bonds relative to stocks. In the empirical part of the paper, bond markets in Nordic countries are used as a regional case-study. A study of markets in the Nordic region is useful, because it allows a comparison of similar capital markets that have different regulatory approaches. The Nordic markets are characterized by a transformation from thin, illiquid markets in the 1960s to fairly well functioning markets by the mid-1990's (Oxelheim, 1996), a development has continued into the beginning of the 2000's. The paper begins by briefly considering the relationship between informational efficiency and allocative/resource efficiency. It then introduces a concept of static efficiency, and suggests a set of indicators of a well functioning secondary market that would be consistent with such a definition. The values derived for indicators of static efficiency are analyzed for the case of bond markets in the Nordic countries. This is followed by a consideration of the major problems related to the measurement of static efficiency. The paper concludes with comments on future extensions and applications of the static efficiency indicator.