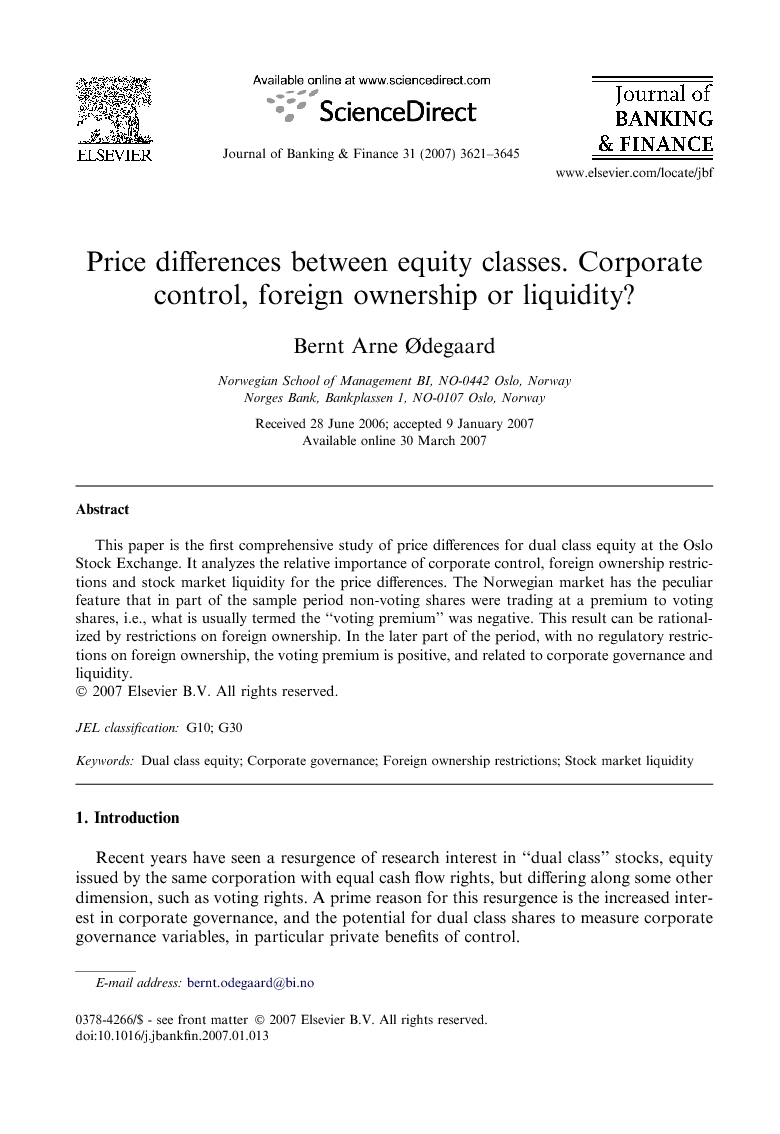 This paper is the first comprehensive study of price differences for dual class equity at the Oslo Stock Exchange. It analyzes the relative importance of corporate control, foreign ownership restrictions and stock market liquidity for the price differences. The Norwegian market has the peculiar feature that in part of the sample period non-voting shares were trading at a premium to voting shares, i.e., what is usually termed the “voting premium” was negative. This result can be rationalized by restrictions on foreign ownership. In the later part of the period, with no regulatory restrictions on foreign ownership, the voting premium is positive, and related to corporate governance and liquidity.

Recent years have seen a resurgence of research interest in “dual class” stocks, equity issued by the same corporation with equal cash flow rights, but differing along some other dimension, such as voting rights. A prime reason for this resurgence is the increased interest in corporate governance, and the potential for dual class shares to measure corporate governance variables, in particular private benefits of control. Much of the recent empirical literature takes the broad view, analyzing the topic of interest using a multi-country crossection.1 Such multi-country studies have the benefit of a relatively large sample, but run the risk of only imperfectly controlling for country specificity. Many of the effects studied in this literature are results of country specific regulation. Using broad measures of country specificity, such as the Law and Finance variables of LaPorta et al. (1998), may only imperfectly control for differences across countries in the effects of regulation. It is therefore important to complement these multi-country studies with single-country studies, in which the regulatory environment is held constant. The present paper is the first to take a close look at dual class equity at the Oslo Stock Exchange (OSE). The Norwegian case has some unique features that contradict prior research. In particular, for part of the period analyzed, non-voting stock were trading at a premium to voting stock, making the “voting premium” negative! As a preview and summary of the paper, Fig. 1 shows the evolution of what is usually called the “voting premium” in this literature, the relative price difference between voting and non-voting shares, for the Oslo Stock Exchange in the period 1988–2005. Financial theory would argue that the voting premium should be positive or zero, since the voting shares have additional options relative to the non-voting shares. However, this intuition does not seem to hold in the Norwegian market, at least for the 1988–1994 period. Note also the sudden shift in the time series for the relation. There seems to be a structural change around 1994. The early period is characterized by a negative “voting premium,” which changes to the positive premium observed in almost every other market. As will be shown later, this result can be rationalized by a change in regulation in 1995, at which date a restriction on foreign ownership of voting stock was lifted.The most important contribution of the paper is that I document the existence of a negative voting rights premium, contradicting both intuition and observations from other countries. I show that this negative voting rights premium is a result of the interaction of three effects: Corporate control, market segmentation of foreign and domestic equity owners, and stock liquidity. The first pushes the voting rights premium up, the second pushes it down. In the Norwegian case, when foreign owners are subject to regulation rationing their access to Norwegian equities, the second effect dominates the first. When the regulation is lifted control issues become dominant. Liquidity further complicates the picture, with the most liquid stock class having a liquidity premium. The results of the paper show that the effects stemming from market segmentation are important enough to outweigh effects of corporate governance, serving as a useful reminder that corporate governance researchers analysing dual class shares need to be careful about controlling for other features likely to affect the relationship. The results of this paper are also important since Norwegian equities are included in many multi-country studies. The way the different causes of price differences interact in the Norwegian market can therefore help in interpreting some of the multi-country results. The paper is structured as follows. Section 2 introduces the research problems and discusses the theoretical and empirical literature. Section 3 presents the relevant regulation of the Norwegian equity market, while Section 4 lists the data sources. Section 5 describes price differences and identifies the determinants of the price differences observed on the Oslo Stock Exchange. Section 6 concludes.

This paper is the only academic study of price differences between dual class equity on the Oslo Stock Exchange. I simultaneously consider three explanations for price differ- ences: Corporate governance, market segmentation between domestic and foreign inves- tors, and liquidity. To summarize the results, consider first the two classes A and B. The A shares have full voting rights, the B shares have limited voting rights. A time series plot of the price differ- ence between the fully voting A shares and the non-voting B shares shows that, in the first subperiod of the sample, the B shares at times traded at a premium to the A shares. The difference gradually shrinks until the A shares start trading at a premium. The change to a positive ‘‘voting rights premium’’ coincides with the lifting of restrictions on foreign own- ership. Regression analysis confirm that the prime explanatory factor for the price differ- ence in the pre-1995 period is the fraction of the firm’s shares held by foreigners. The price difference is larger the holdings of foreign investors. In the post-1994 period corporate governance and stock liquidity are both significant determinants of price differences. That votes are valuable also in the pre-1995 period is confirmed by the price differences between the F and B shares, which are equally accessible to foreign investors. The F shares are voting, while the B shares have limited voting rights. Throughout the pre-1995 period the F shares are trading at a premium to B shares. Although the regressions show only marginal significance on corporate governance variables, the magnitude of the positive premium on the F shares can be used to argue that votes, and hence corporate governance, are important also in this period. The importance of the regulatory restrictions on foreign ownership is similarly con- firmed by the large price differences between the A and F shares. Both classes have full voting rights, but only the F shares are available to foreign investors. The F shares are trading at a substantial premium to A shares the whole pre-1995 period. Concluding, the paper shows results which are familiar from other markets. Corporate governance considerations produce a premium on voting shares. Rationing of foreign investors produces a premium on shares available to foreigners. More liquid stock trades at a premium. The paper shows that all of these factors are important causes of price dif- ferences of dual class shares. The novelty of the Norwegian case is that when these effects are mixed together, they produce results that seem counter-intuitive, in particular the neg- ative ‘‘voting premium,’’ which is shown to be explainable as the effect of segmentation of foreigners dominating the corporate governance effects. An important lesson of the paper is the need for single country studies to really figure out what goes on in a country/market, and also to temper the conclusions of large, multi- country studies by a healthy skepticism in asking whether all the relevant country specific differences have been taken care of. The results of the paper are also important for practical uses of dual class price differ- ences. For example, in a textbook valuation context, Damodaran (2005) shows how to use dual class equity to estimate the value of control, also in an international setting. The need to account for other potential sources of price differences than corporate control is notmentioned. Depending on country, such uses could lead to very misleading valuations, either over or under-estimating the value of control. The point that one needs to consider alternative influences than corporate control on dual class price differences apparently needs to be made yet again.