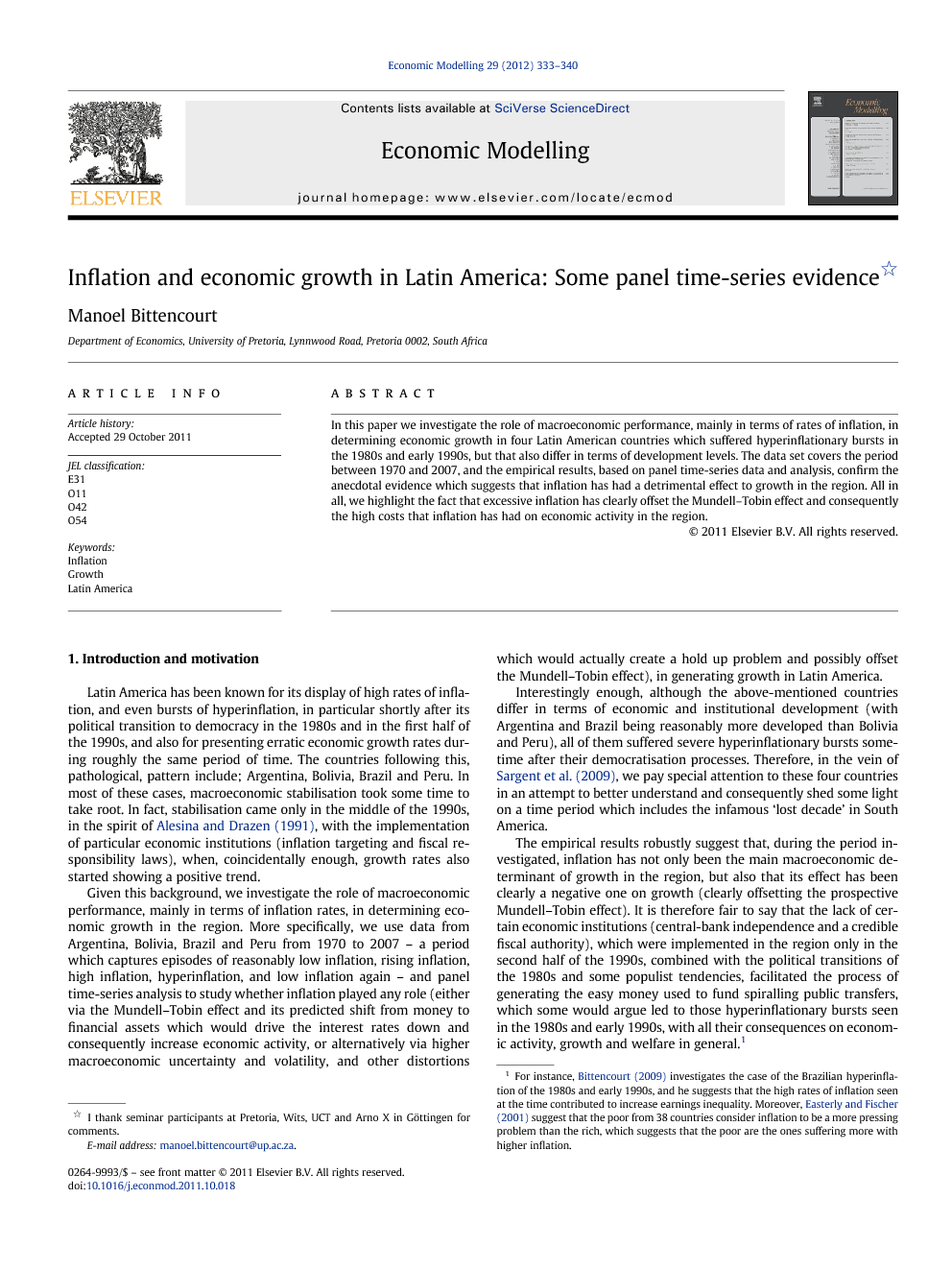 In this paper we investigate the role of macroeconomic performance, mainly in terms of rates of inflation, in determining economic growth in four Latin American countries which suffered hyperinflationary bursts in the 1980s and early 1990s, but that also differ in terms of development levels. The data set covers the period between 1970 and 2007, and the empirical results, based on panel time-series data and analysis, confirm the anecdotal evidence which suggests that inflation has had a detrimental effect to growth in the region. All in all, we highlight the fact that excessive inflation has clearly offset the Mundell–Tobin effect and consequently the high costs that inflation has had on economic activity in the region.

Latin America has been known for its display of high rates of inflation, and even bursts of hyperinflation, in particular shortly after its political transition to democracy in the 1980s and in the first half of the 1990s, and also for presenting erratic economic growth rates during roughly the same period of time. The countries following this, pathological, pattern include; Argentina, Bolivia, Brazil and Peru. In most of these cases, macroeconomic stabilisation took some time to take root. In fact, stabilisation came only in the middle of the 1990s, in the spirit of Alesina and Drazen (1991), with the implementation of particular economic institutions (inflation targeting and fiscal responsibility laws), when, coincidentally enough, growth rates also started showing a positive trend. Given this background, we investigate the role of macroeconomic performance, mainly in terms of inflation rates, in determining economic growth in the region. More specifically, we use data from Argentina, Bolivia, Brazil and Peru from 1970 to 2007 – a period which captures episodes of reasonably low inflation, rising inflation, high inflation, hyperinflation, and low inflation again – and panel time-series analysis to study whether inflation played any role (either via the Mundell–Tobin effect and its predicted shift from money to financial assets which would drive the interest rates down and consequently increase economic activity, or alternatively via higher macroeconomic uncertainty and volatility, and other distortions which would actually create a hold up problem and possibly offset the Mundell–Tobin effect), in generating growth in Latin America. Interestingly enough, although the above-mentioned countries differ in terms of economic and institutional development (with Argentina and Brazil being reasonably more developed than Bolivia and Peru), all of them suffered severe hyperinflationary bursts sometime after their democratisation processes. Therefore, in the vein of Sargent et al. (2009), we pay special attention to these four countries in an attempt to better understand and consequently shed some light on a time period which includes the infamous ‘lost decade’ in South America. The empirical results robustly suggest that, during the period investigated, inflation has not only been the main macroeconomic determinant of growth in the region, but also that its effect has been clearly a negative one on growth (clearly offsetting the prospective Mundell–Tobin effect). It is therefore fair to say that the lack of certain economic institutions (central-bank independence and a credible fiscal authority), which were implemented in the region only in the second half of the 1990s, combined with the political transitions of the 1980s and some populist tendencies, facilitated the process of generating the easy money used to fund spiralling public transfers, which some would argue led to those hyperinflationary bursts seen in the 1980s and early 1990s, with all their consequences on economic activity, growth and welfare in general.1 In addition, the importance of acquiring a better understanding of a time period which includes, amongst other things, high inflation and severe hyperinflationary episodes is not only because we recently have had a protracted hyperinflationary event in Zimbabwe, with all its consequences on economic activity, but also because there is an ongoing debate in developing countries like South Africa and Argentina about the role, legitimacy and efficacy of independent central banks in conducting monetary policy. For instance, the South African case is interesting in the sense that it is a rather unequal country transitioning to democracy (just like Latin America in the 1980s), in which particular stakeholders heavily lobby for a change in the way the South African Reserve Bank implements inflation targeting. The current Argentinian case, in which the governor of the Banco Central has been recently, and somehow hastily, removed from office, is also interesting given the recurring history of populism and poor macroeconomic performance that this country has experienced in the last 40 years or so. Therefore, it is important to better understand not only the causes, but also the consequences of episodes of macroeconomic mismanagement, so that the mistakes of the past do not happen again. The contribution of this paper to the literature is that, firstly, we follow the early advice given by Fischer, 1993 and Temple, 2000, and also the recent analysis by Sargent et al. (2009) of the South American hyperinflationary experiences, and restrict our sample to those diverse Latin American countries which transitioned to more democratic regimes in the 1980s and that suffered hyperinflationary episodes in the 1980s and 1990s to conduct a more disaggregated and ‘detailed’ case study on the subject. Secondly, we follow the advice by Durlauf et al., 2005 and Sirimaneetham and Temple, 2009 and make use of principal component analysis to get independent latent variables with more explanatory power in an attempt to reduce model uncertainty in growth analysis. Thirdly, we also follow the early advice given by Bruno and Easterly (1998), and to some extent the recent analysis by Bond et al. (2010), and make use of annual data, without the usual averaging which would certainly blur our view on the region, to better pinpoint the effects of some macroeconomic variables on growth. Finally, we take advantage of panel time-series analysis – which deals with empirical issues such as non-stationarity, heterogeneity and endogeneity biases, and cross-section dependence in relatively thin panels – to carry out a more specific study on Latin America, which methodologically differs from the previous large cross-sectional and panel studies that treated Latin America either as a dummy or as an outlier to be removed from the sample. This is believed to provide more informative estimates on the topic, and therefore to deepen our knowledge of the region. The remainder of the paper is as follows: the next section briefly reviews and inserts this paper within the previous literature. Section 3 describes the data and the empirical strategy used, and then reports and discusses the results obtained. Section 4 concludes the paper, it summarises the work, and then it suggests some policy implications and also possible future work.

Using a data set covering the period between 1970 and 2007,we investigated in this paper the role of macroeconomic performance,mainly in terms of inflation rates, in determining economic growth in a panel of Latin American countries that experienced hyperinflationary episodes in the 1980s (Argentina, Bolivia and Brazil) and early 1990s (Brazil and Peru). The results, based on panel time-series analysis, suggest that inflation was indeed detrimental to growth in the region. More specifically, amongst the cyclical and structural variables used in the analysis, inflation proved to be the only one presenting clear-cut effects against growth, which highlights its central role in determining economic activity in the region. Moreover, although inflation has been under control in Latin America for some time, overall it still presents detrimental effects to economic activity, it outweighs the Mundell–Tobin effect (or alternatively speaking, inflation has increased macroeconomic uncertainty or induced agents to shift to less productive activities), which highlights the importance of those hyperinflationary bursts in contributing to distort economic activity in a diverse region that already suffers from, amongst other things, chronic income inequality. Finally, growth in the sample was, in one way or another, affected by inflation (inflation did not discriminate between more and less developed countries in the panel).The quality of the evidence presented is, to a certain extent, boosted not only because we focus on those countries which at some point in time suffered from hyperinflation in Latin America, but also because we use a proxy for macroeconomic stability based on principal component analysis, which is believed to reduce model uncertainty and has more explanatory power. Moreover, we avoid the averages and take advantage of panel time-series analysis, which deals with important empirical issues not covered by the previous studies, such as heterogeneity bias in dynamic panels, endogeneity and between-country dependence in relatively thin panels. This analysis is important because it allows us to specifically study Latin America, instead of treating the region either as a dummy or as an outlier to be removed from the sample. It is therefore believed that the analysis conducted here represents a step forward in terms of achieving insightful estimates, and in improving our knowledge on the subject in Latin America. Regarding future work, on the one hand the issue of a smooth transition to a different macroeconomic regime, hyperinflation in this case, can be investigated. On the other hand, with larger panels of high-inflation countries presenting cointegrating relationships and particular commonalities, the use of new estimation methods like DOLS, and CupBC and CupFM proposed respectively by Kao and Chiang (2000), and Bai et al. (2009) is a real possibility for further research.To conclude, the Latin American hyperinflationary experience is informative because it exemplifies an interesting pattern seen in a number of countries at the time. Those Latin American societies that went through political transitions and which still did not have particular economic institutions such as an independent central bank conducting sound monetary policy and a credible fiscal authority in place, ended up experiencing traumatic episodes of hyperinflation, which tend to affect, in one way or another, mainly the welfare of the poor. Moreover, coincidentally enough, macroeconomic stabilisation came only when those countries matured politically, and introduced central bank independence, inflation targeting and fiscal responsibility laws in the 1990s.12 Therefore, perhaps in times in which Chavez, the Kirchners, Morales, Garcia and Correa are exercising their persuasive populist credentials, the lessons of past macroeconomic mismanagement episodes and their effects on economic activity must be not only learned and well understood, but also kept in the minds of policy makers and other stakeholders, so that the mistakes of the past are not repeated again. Ultimately, the lesson here is that political liberalisation processes in developing countries should be accompanied not only by wellconstrained executives, but also by the implementation of the right economic institutions (central bank independence and fiscal responsibility laws), so that the cost of generating high inflation is increased in the first place and macroeconomic factors do not become impediments to economic growth and prosperity.