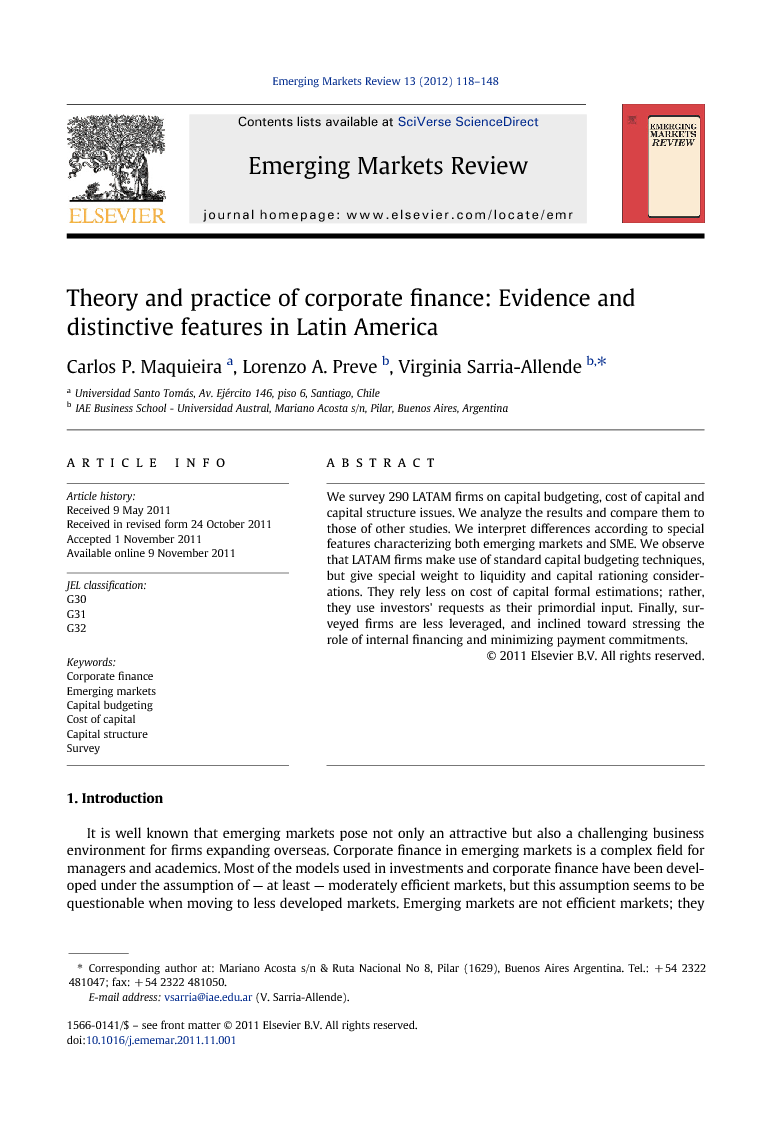 We survey 290 LATAM firms on capital budgeting, cost of capital and capital structure issues. We analyze the results and compare them to those of other studies. We interpret differences according to special features characterizing both emerging markets and SME. We observe that LATAM firms make use of standard capital budgeting techniques, but give special weight to liquidity and capital rationing considerations. They rely less on cost of capital formal estimations; rather, they use investors' requests as their primordial input. Finally, surveyed firms are less leveraged, and inclined toward stressing the role of internal financing and minimizing payment commitments.

This paper presents the results of a survey to 290 Latin American firms. We analyze three main topics related to the practice of corporate finance; capital budgeting, cost of capital and capital structure. Despite differences in sample composition, the results are analyzed not only for the Latin American sample as a whole, across differential firm characteristics, but also in comparison with the US sample results obtained in Graham and Harvey (2001). The analysis is interesting and intuitive, and is extended to more comparable groups (both US small and medium firms, and broader emerging market companies), by making references to previous findings. Even though we observe several decision-making patterns that resemble those prevalent among US large firms, we also identify choices that differ substantially from what theory suggests and from what US large firms do. Most of these choices are reasonably explained by both/either small and medium firm characteristics and/or special features characterizing emerging markets as a whole. Regarding capital budgeting, we find that Latin American firms — similar to US firms — use NPV and IRR as the main tools for analyzing investments; yet, our survey suggests that firms in emerging markets tend to make a more extensive use of Payback and the Profitability Index than their US counterparties. The extensive use of these tools seems to be aligned with the particular instability and market development of Latin American countries and to the specific choices among small and medium firms — even those located in the US market. The main differences in the financial management of firms in our sample are found in the estimation of the cost of capital and capital structure decisions. We find that fewer firms estimate the cost of capital (relative to the US sample); when firms pursue a cost of capital estimation, they seem to rely primarily on what shareholders actually seek as an expected return. This behavior is consistent with the existence of smaller number of shareholders and arm's length transactions between the management and the shareholders. Additionally, we find that the (smaller number of) firms that try to use CAPM tend to have problems in adapting it to the local environment. We report that Latin American small and medium firms lean toward lower leverage ratios, shorter debt maturity, and less use of target debt-equity ratios. They additionally tend to favor internally generated funds, and do not seem to put comparable weight on most of the aspects that theory suggests that should shape the capital structure choice. It is interesting that some even argue that cost of equity is cheaper and less risky than cost of debt (since they avoid getting trapped on pre-defined promised payments). In sum these results suggest that some aspects of the financial theory seem to be frequently adapted when taking decisions in emerging markets and, most particularly, among the subset of small and medium firms. More sophisticated firms (in terms of size, dividend policy, age and qualification of CFOs, share of foreign sales, etc.) select corporate choices most coincident with those prevalent among US large firms. But differences intensify for the rest of the sample. For these cases, we provide several potential intuitions between corporate practice and local market conditions. It would be interesting to continue this line of research by running a more direct comparison between small and medium businesses practices in developed and developing countries, and how they correlated to differential market conditions. Nevertheless, data would be a great challenge for pursuing this task.