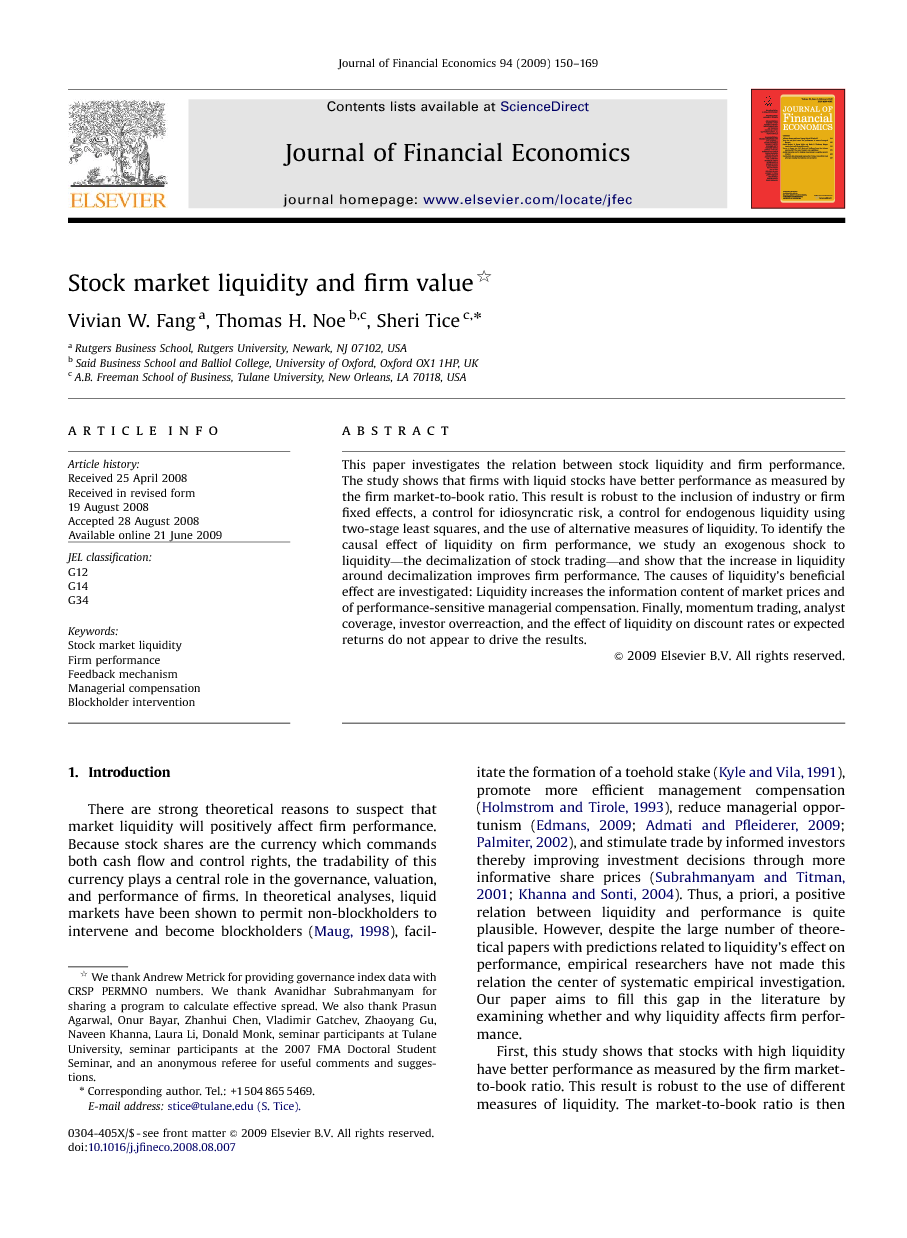 This paper investigates the relation between stock liquidity and firm performance. The study shows that firms with liquid stocks have better performance as measured by the firm market-to-book ratio. This result is robust to the inclusion of industry or firm fixed effects, a control for idiosyncratic risk, a control for endogenous liquidity using two-stage least squares, and the use of alternative measures of liquidity. To identify the causal effect of liquidity on firm performance, we study an exogenous shock to liquidity—the decimalization of stock trading—and show that the increase in liquidity around decimalization improves firm performance. The causes of liquidity's beneficial effect are investigated: Liquidity increases the information content of market prices and of performance-sensitive managerial compensation. Finally, momentum trading, analyst coverage, investor overreaction, and the effect of liquidity on discount rates or expected returns do not appear to drive the results.

There are strong theoretical reasons to suspect that market liquidity will positively affect firm performance. Because stock shares are the currency which commands both cash flow and control rights, the tradability of this currency plays a central role in the governance, valuation, and performance of firms. In theoretical analyses, liquid markets have been shown to permit non-blockholders to intervene and become blockholders (Maug, 1998), facilitate the formation of a toehold stake (Kyle and Vila, 1991), promote more efficient management compensation (Holmstrom and Tirole, 1993), reduce managerial opportunism (Edmans, 2009; Admati and Pfleiderer, 2009; Palmiter, 2002), and stimulate trade by informed investors thereby improving investment decisions through more informative share prices (Subrahmanyam and Titman, 2001; Khanna and Sonti, 2004). Thus, a priori, a positive relation between liquidity and performance is quite plausible. However, despite the large number of theoretical papers with predictions related to liquidity's effect on performance, empirical researchers have not made this relation the center of systematic empirical investigation. Our paper aims to fill this gap in the literature by examining whether and why liquidity affects firm performance. First, this study shows that stocks with high liquidity have better performance as measured by the firm market-to-book ratio. This result is robust to the use of different measures of liquidity. The market-to-book ratio is then separated into the following components: price-to-operating earnings ratio; leverage ratio; and operating return on assets ratio.1 More liquid stocks have higher operating returns on their assets and more equity in their capital structure. In contrast, their price-to-operating earnings ratios are similar to less liquid stocks. These results hold when we control for industry and firm fixed effects, the level of shareholder rights, stock return momentum, idiosyncratic risk, analyst coverage, and endogeneity using two-stage least squares. Next, the direction of causality is established by examining the effect of an exogenous shock to liquidity (decimalization) on firm performance. Decimalization increased stock liquidity in general but it increased it more for actively traded stocks. The change in liquidity surrounding decimalization is used as an instrument for liquidity to document that stocks with a larger increase in liquidity following decimalization have a larger increase in firm performance. Having established a causal relation between liquidity and performance we turn to the problem of identifying its foundation. In Khanna and Sonti (2004), informed traders factor the effect of their trades on managerial behavior into their trading strategy, trading more aggressively, and thus making prices more informative to firm managers and other stakeholders. This feedback effect improves operating performance and relaxes financial constraints. Subrahmanyam and Titman (2001) establish that feedback is more important when the relationship between non-financial stakeholders and the firm is fragile or there is high cash flow uncertainty with respect to existing projects. In support, this study finds that the positive effect of liquidity on firm performance is greater for liquid stocks with high business uncertainty (high operating income volatility or high R&D intensity). This study also shows that stock-market liquidity enhances the effect of pay-for-performance sensitivity on firm performance and operating profitability. This finding is consistent with Holmstrom and Tirole (1993), who predict that liquidity enables informed investors to disguise private information and profit from it. The higher information flow that results from higher liquidity increases the signal-to-noise ratio in stock prices which increases the gain from using stock-based compensation. We do not find support for other agency-based operating performance theories. Liquidity does not appear to improve firm performance through its effect on manager myopia. Though more liquid stocks have higher operating returns on their assets, their price-to-operating earnings ratios are similar to those of less liquid stocks. With myopia, a trade-off of current profits with long-term prospects should result in different price-to-operating earnings ratios for firms with different stock liquidity levels. Furthermore, we do not find evidence that liquidity either augments or diminishes the performance effect of blockholders or shareholder rights. In summary, liquidity's positive effect on performance appears to stem from improving the incentive effects of stock-based compensation and the investment decisions of corporate insiders. Investor sentiment and illiquidity risk are possible alternative explanations for the results as prior empirical work finds a negative correlation between stock liquidity and stock returns.2 The most prevalent explanation given for a negative correlation between stock liquidity and returns is that illiquid stocks have higher transaction costs or a higher sensitivity to a liquidity risk factor (see, for instance, Amihud and Mendelson, 1986; Acharya and Pedersen, 2005). If liquid stocks have lower expected required returns they will trade at a premium all else held constant.3 More recently, Baker and Stein (2004) suggest that liquidity could be a sentiment indicator. In their model, high liquidity stocks are overvalued which is why they trade at a premium and have lower expected returns in the future. If higher firm values for firms with more liquid stocks are based on illiquidity risk or investor sentiment, high liquidity stocks should have higher price-to-operating income ratios but similar financial leverage and operating profitability ratios as low liquidity stocks. Since, on average, liquid stocks have similar price-to-operating income ratios as less liquid stocks but different financial leverage and profitability ratios, illiquidity risk and sentiment do not appear to be explanations for the higher firm values of more liquid stocks. We conclude that stock liquidity improves firm performance through a feedback effect where liquidity stimulates the entry of informed investors who make prices more informative to stakeholders. Liquidity also improves firm performance by increasing the efficiency of performance-sensitive managerial compensation. The paper outline is as follows: In Section 2, we review prior work and discuss the various ways in which stock market liquidity might affect governance and thus firm performance. Section 3 describes our sample, data sources, and variable measurements. Section 4 contains our empirical tests while Section 5 concludes.