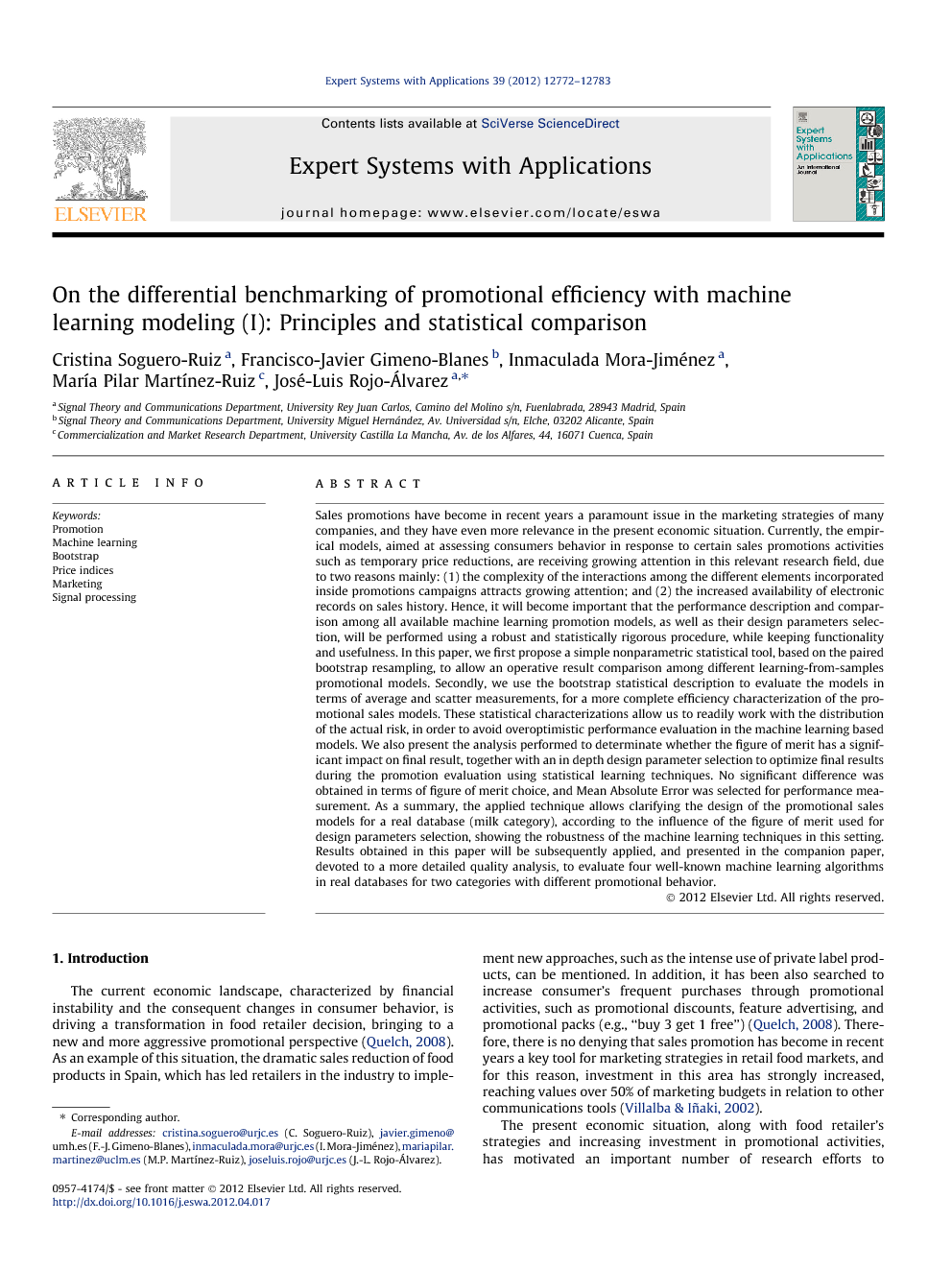 Sales promotions have become in recent years a paramount issue in the marketing strategies of many companies, and they have even more relevance in the present economic situation. Currently, the empirical models, aimed at assessing consumers behavior in response to certain sales promotions activities such as temporary price reductions, are receiving growing attention in this relevant research field, due to two reasons mainly: (1) the complexity of the interactions among the different elements incorporated inside promotions campaigns attracts growing attention; and (2) the increased availability of electronic records on sales history. Hence, it will become important that the performance description and comparison among all available machine learning promotion models, as well as their design parameters selection, will be performed using a robust and statistically rigorous procedure, while keeping functionality and usefulness. In this paper, we first propose a simple nonparametric statistical tool, based on the paired bootstrap resampling, to allow an operative result comparison among different learning-from-samples promotional models. Secondly, we use the bootstrap statistical description to evaluate the models in terms of average and scatter measurements, for a more complete efficiency characterization of the promotional sales models. These statistical characterizations allow us to readily work with the distribution of the actual risk, in order to avoid overoptimistic performance evaluation in the machine learning based models. We also present the analysis performed to determinate whether the figure of merit has a significant impact on final result, together with an in depth design parameter selection to optimize final results during the promotion evaluation using statistical learning techniques. No significant difference was obtained in terms of figure of merit choice, and Mean Absolute Error was selected for performance measurement. As a summary, the applied technique allows clarifying the design of the promotional sales models for a real database (milk category), according to the influence of the figure of merit used for design parameters selection, showing the robustness of the machine learning techniques in this setting. Results obtained in this paper will be subsequently applied, and presented in the companion paper, devoted to a more detailed quality analysis, to evaluate four well-known machine learning algorithms in real databases for two categories with different promotional behavior.

The current economic landscape, characterized by financial instability and the consequent changes in consumer behavior, is driving a transformation in food retailer decision, bringing to a new and more aggressive promotional perspective (Quelch, 2008). As an example of this situation, the dramatic sales reduction of food products in Spain, which has led retailers in the industry to implement new approaches, such as the intense use of private label products, can be mentioned. In addition, it has been also searched to increase consumer’s frequent purchases through promotional activities, such as promotional discounts, feature advertising, and promotional packs (e.g., “buy 3 get 1 free”) (Quelch, 2008). Therefore, there is no denying that sales promotion has become in recent years a key tool for marketing strategies in retail food markets, and for this reason, investment in this area has strongly increased, reaching values over 50% of marketing budgets in relation to other communications tools (Villalba & Iñaki, 2002). The present economic situation, along with food retailer’s strategies and increasing investment in promotional activities, has motivated an important number of research efforts to characterize sales promotion and to measure promotional efficiency. Existing models for analysing sales promotions effects can be classified into two separate groups. In the first group, namely theoretical models, consumer behavior is basically evaluated considering a sociological and psychological perspective, whilst in the second group of empirical models, promotional structures based on empirical information extracted from historical databases are usually built. Within that last group, the efforts have been focused during the last decades on the understanding of sales promotion dynamics based on classical statistical analysis methods, and more recent works are concentrated towards the machine learning algorithmic and data mining techniques, as powerful tools to extract information from existing recorded data (Mitchell, 1997 and Van Heerde et al., 2000). Machine learning techniques aim to find recurring patterns, trends, or rules, which can explain the data behavior in a given context, and then allows to extract new knowledge on the consumer behavior, to improve the performance of marketing operations, and to estimate the commonly called Deal Effect Curve (DEC). In particular, a vast amount of knowledge has been extracted from machine learning techniques, although not all promotional behaviors have been studied and there is still room for in depth further studies (Bell et al., 1999, Blatterg et al., 1995 and Leeflang and Wittingk, 2000). More specifically, operational problems arise in machine learning promotional modeling, when based on nonlinear estimation techniques, for evaluating and demonstrating working hypothesis (Liu et al., 2004, Martínez-Ruiz et al., 2005, Martı´nez-Ruiz et al., 2006b, Martínez-Ruiz et al., 2006a, Van Heerde et al., 2001 and Wang et al., 2008). In this paper we present, prior to an in detail analysis of machine-learning performance, a pre-evaluation of different figures of merit, to asses their impact on the final result, together with an in depth analysis for design parameters selection. Results obtained here allowed establishing and validating figures of merit and the design parameters selection procedure to be applied for pricing promotion study. Specifically, we applied these results in the companion paper (Soguero-Ruiz, Gimeno-Blanes, Mora-Jiménez, Martı´nez-Ruiz, & Rojo-Álvarez, 2012), to evaluate four well-known machine learning algorithms in two real databases for two categories presenting dramatically different promotional behavior. The draw of the paper is as follows. Section 2 includes a review of basic concepts of sales promotion in retailer environments, as well as a summary of previous work on machine learning in the context of marketing. Section 3 gives a short description of nonparametric inference paired hypothesis tests, based on bootstrap resampling, and actual risk evaluation of a set of adequate figures of merit is introduced. The figure of merit benchmark represents a relevant contribution of this paper, as it ends up becoming an operative tool for decision support in promotional modeling with machine learning techniques. Section 4 summarizes experiments and results based on real data. Finally in Section 5, conclusion and remarks are presented.

This work first aimed to analyze the multiple and simultaneous effect of different promotional activities from retailers with individual DEC by products. It was subsequently reported the complexity of the cross-effects among different promotional activities taking place at the same time. These promotional activities and discounts strategies represent a second-order effect of the current economic situation where retailers are seeking for strategies that lead to better performance – especially in certain industries such as grocery retailing –, and hence, it is essential to propose effective tools that facilitate accurate decision-making processes and ensure business competitiveness and survival in the long-run. To do so, nonparametric statistical tools are being proposed in general, and a prior analysis on the impact and effect of the different existing techniques and figures of merit have been addressed here. We have analyzed the data corresponding to the sales recorded by a Spanish grocery store during 304 days aggregated on week basis, for several products in milk and beer categories. The results obtained have been consistent with previously published results, where despite some exceptions in the beer category, the price discounts offered by the retail manager in both categories were effective in increasing the sales volume, and also threshold and saturation effects were found. Also, combined and concurrent promotional activities effects were found. It should be remarked that several threshold effects were identified in the milk category, as well as diverse saturation effects in both milk and beer categories. As far as design parameter selection is concerned, it was found that for each product, the design parameter was similar in the case of GRNN for both categories. MLP required different number of hidden neurons across models and categories and in some cases a significant number of them. Attending to the different figures of merit analyzed, it was verified that the quality of the prediction is not significantly dependent on the performance measure used for selection of design parameters. A simple figure of merit such as MAE can be selected for design parameter selection, as no statistically significant differences were found in performance among evaluated techniques and/or figures. Finally, it should be highlighted that results and conclusions raised through this paper are needed and therefore applied, as validated assumptions for the study presented in the companion paper (Soguero-Ruiz et al., 2012), for a deeper analysis of the machine learning modeling for the two databases (milk and beer).