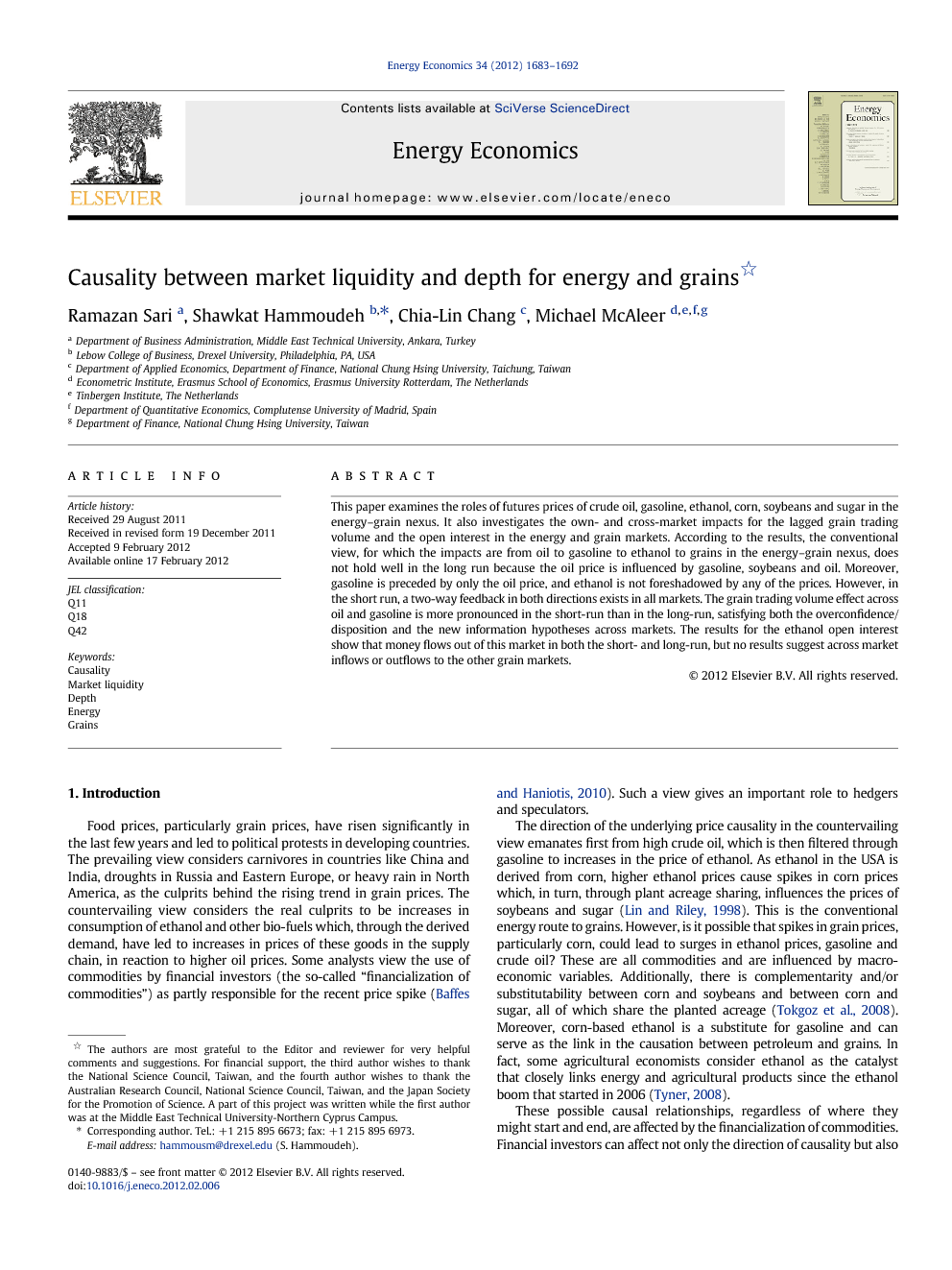 This paper examines the roles of futures prices of crude oil, gasoline, ethanol, corn, soybeans and sugar in the energy–grain nexus. It also investigates the own- and cross-market impacts for the lagged grain trading volume and the open interest in the energy and grain markets. According to the results, the conventional view, for which the impacts are from oil to gasoline to ethanol to grains in the energy–grain nexus, does not hold well in the long run because the oil price is influenced by gasoline, soybeans and oil. Moreover, gasoline is preceded by only the oil price, and ethanol is not foreshadowed by any of the prices. However, in the short run, a two-way feedback in both directions exists in all markets. The grain trading volume effect across oil and gasoline is more pronounced in the short-run than in the long-run, satisfying both the overconfidence/disposition and the new information hypotheses across markets. The results for the ethanol open interest show that money flows out of this market in both the short- and long-run, but no results suggest across market inflows or outflows to the other grain markets.

Food prices, particularly grain prices, have risen significantly in the last few years and led to political protests in developing countries. The prevailing view considers carnivores in countries like China and India, droughts in Russia and Eastern Europe, or heavy rain in North America, as the culprits behind the rising trend in grain prices. The countervailing view considers the real culprits to be increases in consumption of ethanol and other bio-fuels which, through the derived demand, have led to increases in prices of these goods in the supply chain, in reaction to higher oil prices. Some analysts view the use of commodities by financial investors (the so-called “financialization of commodities”) as partly responsible for the recent price spike (Baffes and Haniotis, 2010). Such a view gives an important role to hedgers and speculators. The direction of the underlying price causality in the countervailing view emanates first from high crude oil, which is then filtered through gasoline to increases in the price of ethanol. As ethanol in the USA is derived from corn, higher ethanol prices cause spikes in corn prices which, in turn, through plant acreage sharing, influences the prices of soybeans and sugar (Lin and Riley, 1998). This is the conventional energy route to grains. However, is it possible that spikes in grain prices, particularly corn, could lead to surges in ethanol prices, gasoline and crude oil? These are all commodities and are influenced by macroeconomic variables. Additionally, there is complementarity and/or substitutability between corn and soybeans and between corn and sugar, all of which share the planted acreage (Tokgoz et al., 2008). Moreover, corn-based ethanol is a substitute for gasoline and can serve as the link in the causation between petroleum and grains. In fact, some agricultural economists consider ethanol as the catalyst that closely links energy and agricultural products since the ethanol boom that started in 2006 (Tyner, 2008). These possible causal relationships, regardless of where they might start and end, are affected by the financialization of commodities. Financial investors can affect not only the direction of causality but also the number and intensity of such interrelationships. Market tradability and depth (Kyle, 1985), as reflected in the sizes of trading volumes and open interest decided by hedgers, speculators and arbitrageurs, can play a role in such interrelationships (Dahlgran, 2009 and Franken and Parcell, 2003). Trading volume is important in improving forecasts of changes in futures prices. The price-trading volume, or open interest relation, is important for several reasons, as it: provides insights as to the structure of markets (such as the dominance of speculators and the presence of hedging and arbitrage activity; is used in event studies; shows the importance of private and public information in determining investor demand (Admati and Pfleiderer, 1988); and is crucial to the debate regarding the distribution of speculative prices. Some markets, such as that for ethanol, are known to be thin, and hence are avoided by hedgers and speculators. For this reason, it will be interesting to explore and compare the trading volume and open interest of these markets on own- and cross-returns. The objectives of this paper are four-fold, namely to: (1) discern the forcing variables that affect the long-run relationships among the futures prices of crude oil, gasoline, ethanol, corn, soybeans and sugar; (2) determine if ethanol plays a linkage role between petroleum and grain products; (3) analyze the long- and short-run relationships between these products; and (4) examine the roles that the grain trading volume and open interest play in the petroleum–grain interrelationships. The paper is organized as follows. Section 2 provides a review of the literature, Section 3 presents the data and descriptive statistics of the 12 series used in the empirical analysis, Section 4 presents the models and empirical results, and Section 5 gives some concluding comments.

The major contribution of the paper is the inclusion of volume and open interest for the commodities as exogenous variables in the model. It is well known that volume is I(0), which requires the use of the ARDL model as other variables are I(1). This inclusion enables us to distinguish between impacts of liquidity and depth (hedging). Another contribution is the examination of whether ethanol plays the role of catalyst in the energy – grains nexus. The conventional view of the causal ordering within the energy – grains price nexus states that the casual relationships fl ows from the price of oil to the prices of gasoline, ethanol, and corn, and then on to other grains which share the same cropland. As far as the causal ordering of this nexus is concerned, the empirical results in this study are mixed in the long-run over the full sample. They show that oil is in fl uenced by gasoline and soybean prices, which is not consistent with the conventional view of oil prices. The results are, however, consistent for the gasoline price, which has been shown to be in fl u- enced by the oil price over the long run. Ethanol shows no sensitivity to any of the prices in the long run, so that the result is not consistent with the conventional view. The policy implications of these long-run results suggest that surges in soybean, and consequently food, has a direct increase on oil and ethanol prices, supplementing the impactof oil in fl ation on overall in fl ation. From the investors' point of view, soybean and oil do not contribute signi fi cant diversi fi cation bene fi ts to portfolios in the long run. These results show that oil and ethanol prices face different long- term driving forces, which provide diverse long-term substitution opportunities between gasoline and ethanol. However, this fi nding is still conditional on the institutional walls that con fi ne the development of ethanol as an alternative fuel. From the investors' point of view, ethanol and oil may add diversi fi cation gains to portfolios. The relationships between the prices in the short run are more aligned with the conventional view. These short-run prices in fl uence each other more in a feedback relationship than in a unidirectional in fl uence, suggesting that these commodity prices share short-run common shocks and make in fl ation fi ghting by the monetary authority more challenging in the short run. Substitution among oil, gasoline and ethanol is thus not very useful in the short run. Any green energy policy may not be successful in reducing energy prices, as it may have greater bearing on national security. Diversi fi cation bene fi ts may be greater in the short run than in the long run. The estimates also suggest that the trading volume, and not the open interest, are signi fi cant in the long run, a result that holds for some of the commodities, implying these variables are important for improving the forecasts of futures prices and ef fi ciency of pric- ing. From the investors' perspective, this result implies that market li- quidity dominates market depth or hedging in in fl uencing long-term pricing, and that speculators are dominant over arbitrageurs in these markets. There are own-market and cross-market trading volume im- pacts of ethanol and soybeans on the oil, gasoline and ethanol prices. The sign of the trading volume impacts for ethanol and soybeans alter- nate in affecting oil, gasoline and ethanol returns, suggesting that two hypotheses, namely the irrational liquidity premium and simultaneousarrival of new information to volumes and prices, hold for these commodities. Open interest is only signi fi cant for ethanol and is negative, imply- ing that there is money out fl ow from the ethanol market and active arbitrage activity in this market. The results also indicate that there is money in fl ow from the ethanol markets to the gasoline market. From the policy makers' and investors' perspectives, ethanol may have hedging capability for gasoline because of gasoline's swap- augmented depth. The short-run results for the trading volume and open interest are similar in the short-run as in the long-run. It is somewhat surprising that the volume and open interest of sugar and corn have no lead/ lag relationships with oil, gasoline and ethanol prices and returns. Thus, these properties for the two commodities have no bearing on their liquidity and depth. Sugar and corn are subject to import quotas in the United States, which may have impacted those commodities' two properties. The most interesting IRF results are the responses of corn and sugar returns to the unexpected shocks in oil and gasoline returns. This fi nding is likely to have some bearing on the fact that both corn and sugar are used to derive bio-fuel gasoline. The subperiod which coincides with the economic recovery that started in July 2009 shows less of a long-run equilibrium relationship and more of common stochastic shocks in the energy and grain prices. This underscores the changes that the US economy and commodity markets have undergone during the 2007 – 2009 Great Recession. Policy makers should take note of this reduction in pricing ef fi ciency as a post crisis phenomenon.