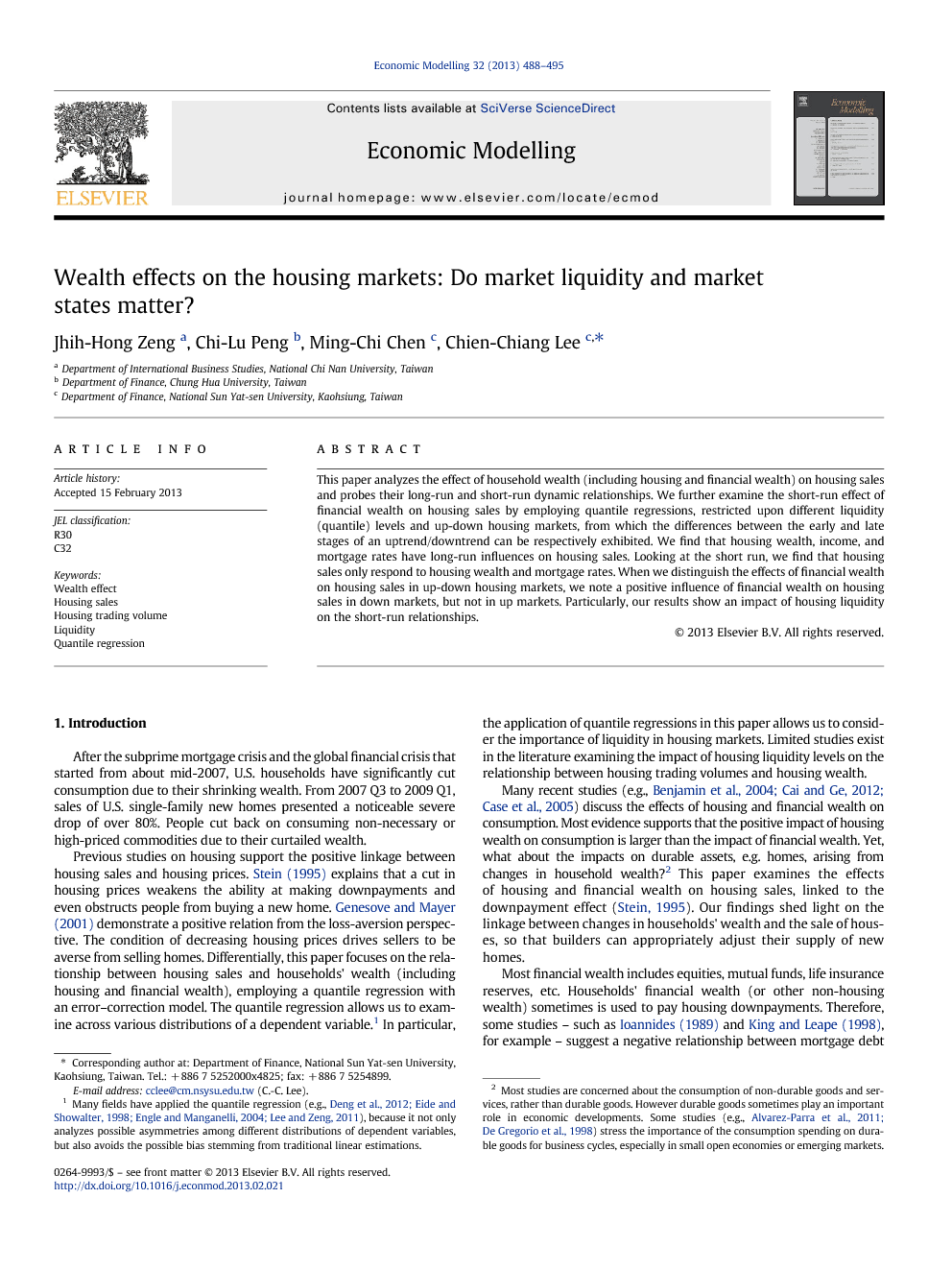 Manystudiesrecentlyhaveinvestigatedtheimpactofwealtheffects on economic activities. Wealth in fl uences consumption and provides information for forecasting assets' returns, while it can also be linked tothedemandformortgagedebts.Moststudiesfocusontheeffectof fi - nancial and housing wealth, because both assets take up a larger share of aggregate wealth. This paper extends these studies by examining the effect of fi nancial and housing wealth on actual housing sales. We substitute housing prices with housing wealth (the value of tangibleassetsintheformofresidentialbuildingsminushomeliability)to fi nda link with housing trading volume. We focus on durable assets – houses – and examine the effect of liquidity for housing markets in short-run relationships. More particularly, we directly examine the in fl uence of wealth on housing sales, whereas previous studies focus on the relationship between mortgage debts and wealth. Our empirical results contribute to the existing literatures as fol- lows. First, households' housing wealth, excluding home mortgages, has a long-run positive linkage with housing sales, whereas no link- age exists for fi nancial wealth. On the other hand, housing sales are cointegrated with real income per capita and mortgage rates, respec- tively, with negative long-run relationships. Second, the short-run dynamic effects of housing wealth, fi nancial wealth, income, and mortgage rates on housing sales are related to housing markets' liquidity. Previous studies do not discuss much about the impact of liquidity in housing markets. For example, most studies support the effect of mortgage rates on housing sales. However, on our examination of short-run relationships, changes in mortgage rates do not have any statistically signi fi cant in fl uence on housing sales when housing markets are in a downtrend trend and the liquidity of housing markets is low. Third and fi nally, the short-run asymmetric responses of housing sales depend on the trends (up and down) of housing prices. More importantly, the changes in households' fi nancial wealth have a pos- itive in fl uence on housing sales when the liquidity of housing markets is deemed non-low and housing prices are in a downtrend, whereasthe evidence is not signi fi cant in statistics when the liquidity of hous- ing markets is low and prices are decreasing. Both conditions of hous- ing liquidity and the state of housing (up and down) can separately generate the early and late stages of a downtrend. Therefore, we are able to exhibit the difference between the early and late stages of a down market. In addition, mortgage rate changes have no effect on housing sales under the conditions of low liquidity and a down mar- ket. These fi ndings can offer policy makers and builders relevant infor- mation and references for future guidelines and plans, respectively. In contrast to previous studies (e.g., Ioannides, 1989; King and Leape, 1998 ) examining the relationship between wealth effects and the demand for mortgage rates, we directly investigate the impact of housing and fi nancial wealth on housing sales, yet some questions do emerge from this paper. For example, why is the long-run cointegration relationship between housing sales and income nega- tive? Does the impact of wealth effects on consumption differ be- tween durable goods and non-durable goods? These questions can be examined in future research.