عنوان انگلیسی
The proof is in the pudding: Arbitrage is possible in limited emerging markets
دانلود فوری مقاله + سفارش ترجمه 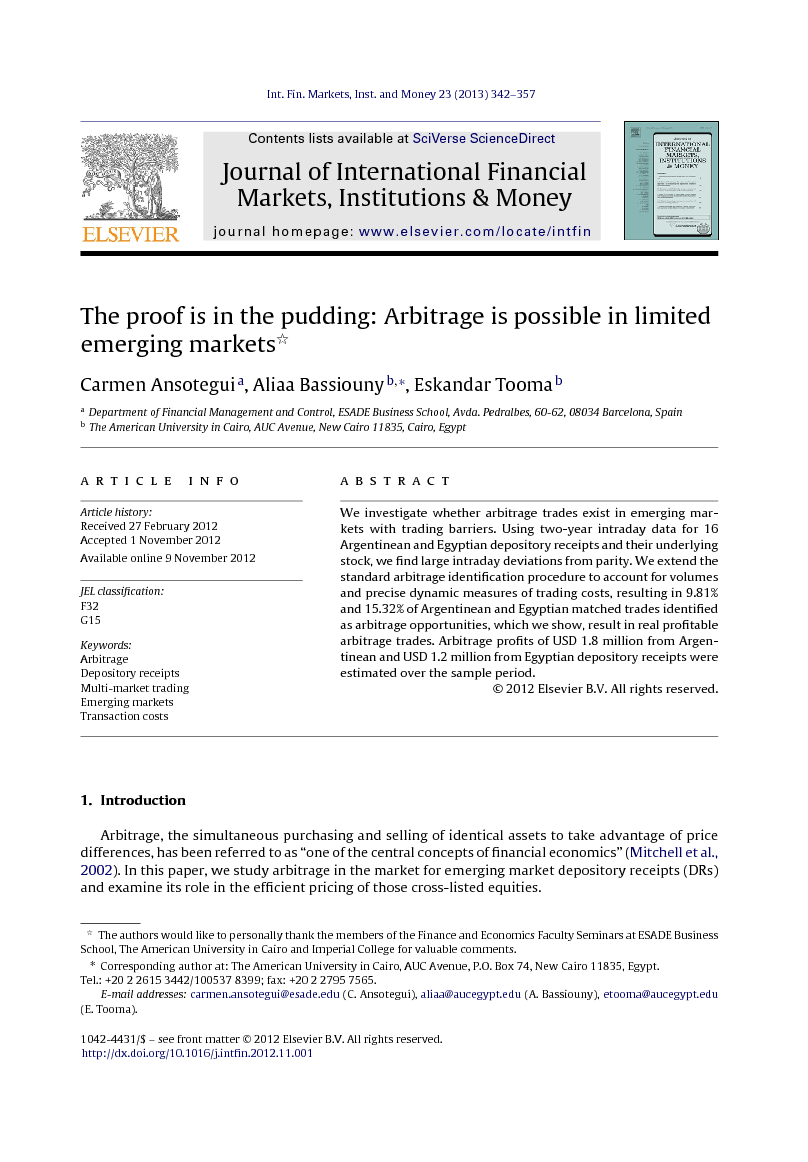 We investigate whether arbitrage trades exist in emerging markets with trading barriers. Using two-year intraday data for 16 Argentinean and Egyptian depository receipts and their underlying stock, we find large intraday deviations from parity. We extend the standard arbitrage identification procedure to account for volumes and precise dynamic measures of trading costs, resulting in 9.81% and 15.32% of Argentinean and Egyptian matched trades identified as arbitrage opportunities, which we show, result in real profitable arbitrage trades. Arbitrage profits of USD 1.8 million from Argentinean and USD 1.2 million from Egyptian depository receipts were estimated over the sample period.

This paper contributes to pre-existing studies on arbitrage in the DR market in several ways. It supplements Gagnon and Karolyi's (2010) study by dissecting their observations on the presence of large price deviations in cross-listed emerging market equity with limits to arbitrage, to show that arbitrage opportunities do exist. It confirms the hypothesis set forth in Suarez (2005a): that cross-listed stock with lower trading frequencies presents larger arbitrage opportunities. Furthermore, it provides empirical support for Kaul and Merhotra's (2007) results on the role of trades in price convergence. To our knowledge, this is the first evidence of the importance of arbitrage trades in eliminating arbitrage opportunities in DRs. The novelty of our results is attributed to the use of intraday data as well as extending the arbitrage identification methodology to better fit the microstructure limitations present in our sample of emerging markets. We reach a point that necessitates a discussion of why large arbitrage opportunities appear in our sample. The first involves an argument of market efficiency. Complete market efficiency implies that riskless profitable arbitrage opportunities are non-existent due to the active participation of rational and information efficient market players, with the threat of arbitrage usually enough to keep prices aligned. While Suarez (2005a) finds small incidences of arbitrage opportunities in developed market securities they are not far from full efficiency. However, he expects that “all other cross-listed stock markets which are less developed and include less heavily traded stocks to exhibit lower degrees of efficiency and integration”. We extend his work and test his hypothesis. Indeed, previous studies on the efficiency of our sample of emerging markets show that there are significant deviations from efficiency and that these markets are at least weak form efficient (see studies by Mecagni and Sourial (1999) and Lagoarde-Segota and Luceya (2008) on the efficiency of the Egyptian Stock Exchange and Rossi (2000) on the efficiency of the Buenos Aires Stock Exchange). Therefore, one reflection of the low levels of market efficiency of our markets is the presence of the large frequent and profitable arbitrage opportunities we document in this work. Arbitrage opportunities between DRs and their underlying stocks should not appear in the first place if movements in those identical securities only reflect changes in fundamental value. Yet recent empirical evidence shows that differential co-movements between identical stocks trading in different markets can reflect behavioral or noise trading (Barberis et al., 2005) as well as differences in ownership base. In the case of identical securities trading in two different markets, arbitrage opportunities can appear due to the differential co-movements of the DRs and their underlying stock price, since as Gagnon and Karolyi (2010) argue, there are “little reasons to believe that the two groups of noise traders would share the same mistaken beliefs about the shares’ fundamental value”. Besides behavioral trading, another reason explaining the different co-movements between two DRs and their underlying stock are differences in the ownership base, since institutional and individual traders do not exhibit similar trading patterns (Ji, 2005). Finally, information asymmetry between investors in different markets can explain the presence of arbitrage opportunities. If an investor in the local market has information that will make the stock price soon drop, he might quote well below the current market price, creating an arbitrage opportunity (Suarez, 2005a). Information asymmetry between investors in the local versus the foreign market is examined with a price discovery analysis for whether the local or foreign market leads. Indeed, Ansotegui et al. (2013) show that for all cross-listed Egyptian equities and the majority of Argentinean ones, the local market leads in the sense that DR prices adjust more often to movements on the local stock than vice versa, reflecting the flow of information between markets. In summary, this paper establishes the presence of large profitable arbitrage opportunities in DRs from emerging markets using intraday data and show the importance of arbitrage trades in eliminating them. The evidence on the actual profitability of arbitrage trades in emerging markets was probably concealed so far to profit from such an anomaly. For individuals to take a piece of the pie may prove difficult, however, as this activity must be institutionalized by large traders with large capital holdings in order to overcome the existing limitations. Future studies can explore whether arbitrage activity persists in other samples of DRs around the world.