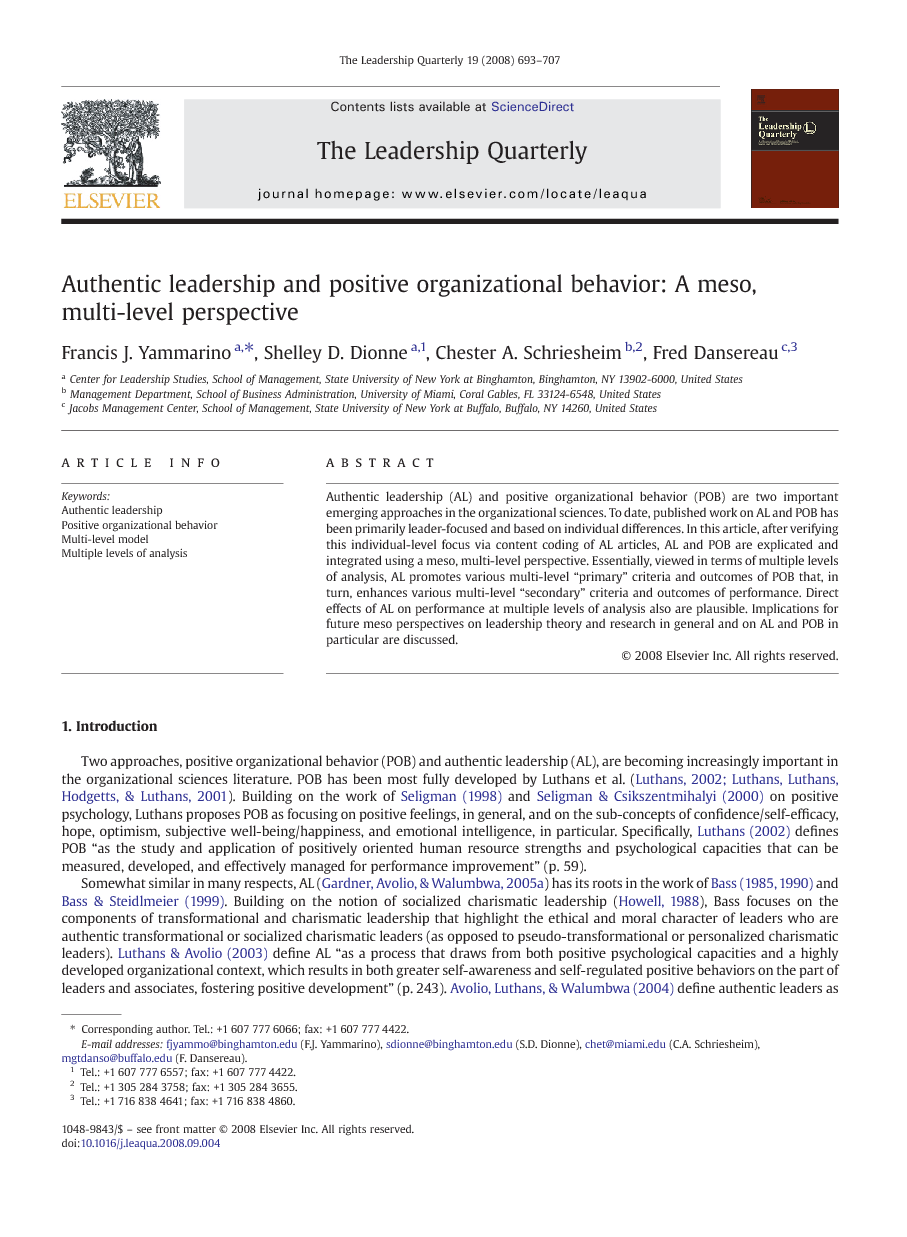 Authentic leadership (AL) and positive organizational behavior (POB) are two important emerging approaches in the organizational sciences. To date, published work on AL and POB has been primarily leader-focused and based on individual differences. In this article, after verifying this individual-level focus via content coding of AL articles, AL and POB are explicated and integrated using a meso, multi-level perspective. Essentially, viewed in terms of multiple levels of analysis, AL promotes various multi-level “primary” criteria and outcomes of POB that, in turn, enhances various multi-level “secondary” criteria and outcomes of performance. Direct effects of AL on performance at multiple levels of analysis also are plausible. Implications for future meso perspectives on leadership theory and research in general and on AL and POB in particular are discussed.

Two approaches, positive organizational behavior (POB) and authentic leadership (AL), are becoming increasingly important in the organizational sciences literature. POB has been most fully developed by Luthans et al. (Luthans, 2002 and ⁎Luthans et al., 2001). Building on the work of Seligman (1998) and Seligman & Csikszentmihalyi (2000) on positive psychology, Luthans proposes POB as focusing on positive feelings, in general, and on the sub-concepts of confidence/self-efficacy, hope, optimism, subjective well-being/happiness, and emotional intelligence, in particular. Specifically, Luthans (2002) defines POB “as the study and application of positively oriented human resource strengths and psychological capacities that can be measured, developed, and effectively managed for performance improvement” (p. 59). Somewhat similar in many respects, AL (Gardner, Avolio, & Walumbwa, 2005a) has its roots in the work of Bass, 1985 and Bass, 1990 and Bass & Steidlmeier (1999). Building on the notion of socialized charismatic leadership (Howell, 1988), Bass focuses on the components of transformational and charismatic leadership that highlight the ethical and moral character of leaders who are authentic transformational or socialized charismatic leaders (as opposed to pseudo-transformational or personalized charismatic leaders). Luthans & Avolio (2003) define AL “as a process that draws from both positive psychological capacities and a highly developed organizational context, which results in both greater self-awareness and self-regulated positive behaviors on the part of leaders and associates, fostering positive development” (p. 243). Avolio, Luthans, & Walumbwa (2004) define authentic leaders as “those who are deeply aware of how they think and behave and are perceived by others as being aware of their own and others' values/morale perspectives, knowledge, and strengths; aware of the context in which they operate; and who are confident, hopeful, optimistic, resilient, and of high moral character” (p. 4).

We began with a simple goal: to explicate the notions of AL, POB, and their linkages to one another and performance from a meso, multi-level perspective. We analyzed prior AL work, discovering it to be primarily individual level in focus, as is prior POB work. Viewed in terms of multiple levels of analysis, AL then was asserted to promote various multi-level “primary” criteria and outcomes of POB that, in turn, were posited to enhance various multi-level “secondary” criteria and outcomes of performance. Our hope is that by developing a meso, multi-level approach to AL and POB we will stimulate future multi-level testing of these ideas and contribute to the field of multi-level leadership theory and research.