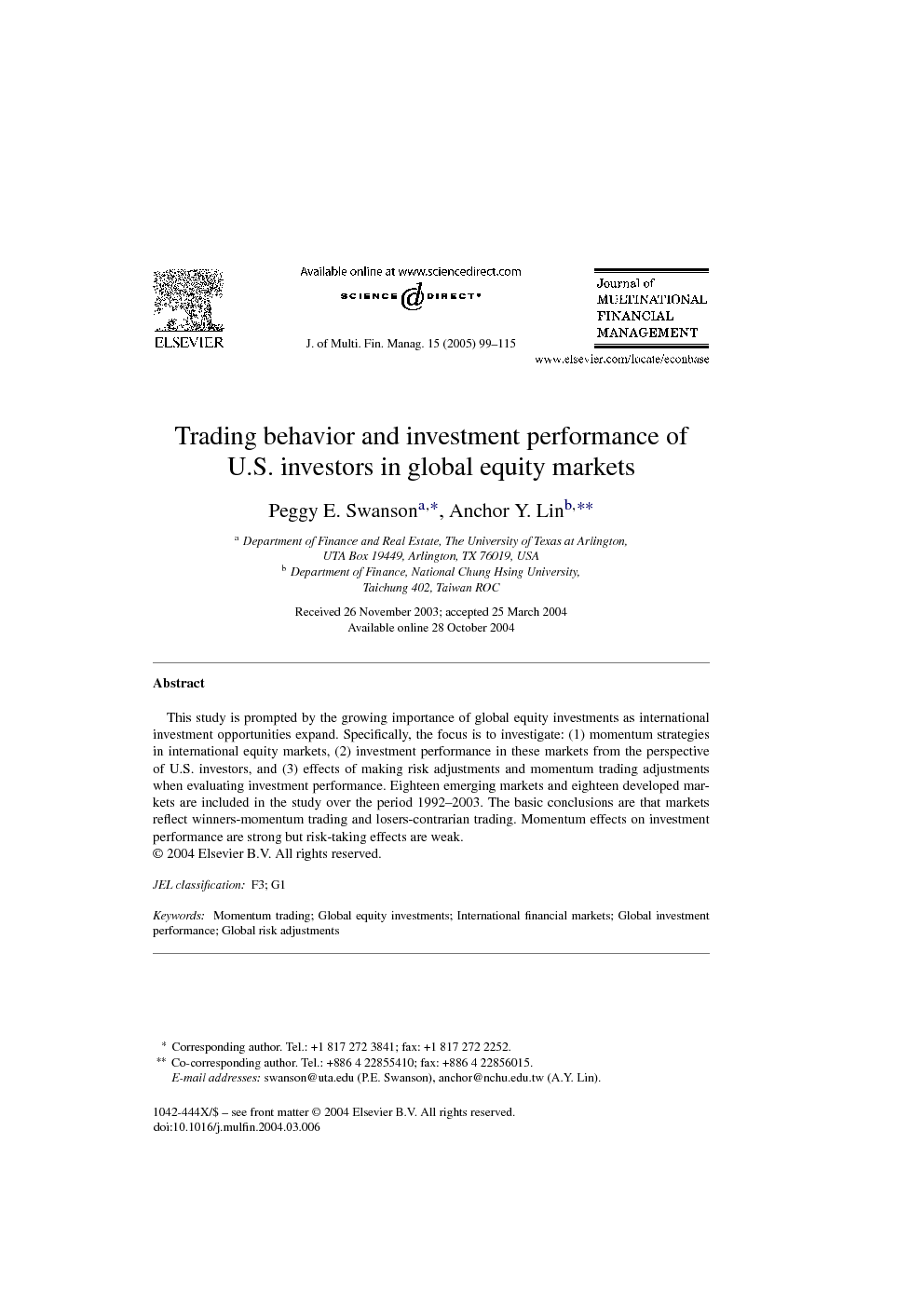 This study is prompted by the growing importance of global equity investments as international investment opportunities expand. Specifically, the focus is to investigate: (1) momentum strategies in international equity markets, (2) investment performance in these markets from the perspective of U.S. investors, and (3) effects of making risk adjustments and momentum trading adjustments when evaluating investment performance. Eighteen emerging markets and eighteen developed markets are included in the study over the period 1992–2003. The basic conclusions are that markets reflect winners-momentum trading and losers-contrarian trading. Momentum effects on investment performance are strong but risk-taking effects are weak.

Benefits from international portfolio diversification have been widely studied and well documented. During recent years, however, the landscape for international investments has changed appreciably. Liberalization and deregulation of financial markets, particularly emerging markets, and increases in privatization worldwide have brought expanded investment opportunities for global investors. The growing influence of foreign equity investments attracts the attention of policymakers attempting to stabilize their financial markets and to achieve their domestic economic goals. Similarly, investors make their geographic portfolio allocation decisions and establish trading strategies based on an increasing number of choices. This study addresses these issues by studying the behavior of U.S. investors in the 18 largest emerging country equity markets and in the 18 largest developed country equity markets around the globe. Specifically, the focus of the study is to investigate: (1) momentum strategies of buying past winners and selling past losers, (2) measures of investment performance for U.S. investors, and (3) effects of adjusting for risk and for momentum effects in evaluating investment performance. The analyses of trading behavior and investment performance of U.S. investors are based on their monthly purchasing and selling activities in foreign markets over the 1992–2003 period. The investigation is motivated by previous studies which indicate that investors often earn significant profits by buying past winners and selling past losers in the U.S. market. Rather than investigating only the domestic market, this study investigates momentum strategies globally and attempts to identify whether superior performance, if it exists, is the result of the simple trading strategy or is the result of risk taking and/or momentum influences. While most past studies focus on performance measures from simulating momentum strategies, this study uses actual trading data. Because momentum trading can have major effects on capital flows and market stability and investor performance can have major effects on portfolio allocations, information gleaned from this study should prove useful to both policymakers and investors. The investment performance of U.S. investors in global markets is evaluated using three measures of returns: raw returns, risk-, and momentum-adjusted returns. Comparisons of strategies and performance are made between developed markets and emerging markets and over different holding periods. The paper proceeds as follows: Section 2 reviews literature, Section 3 presents data and methodology, Section 4 reports empirical results, and Section 5 concludes.