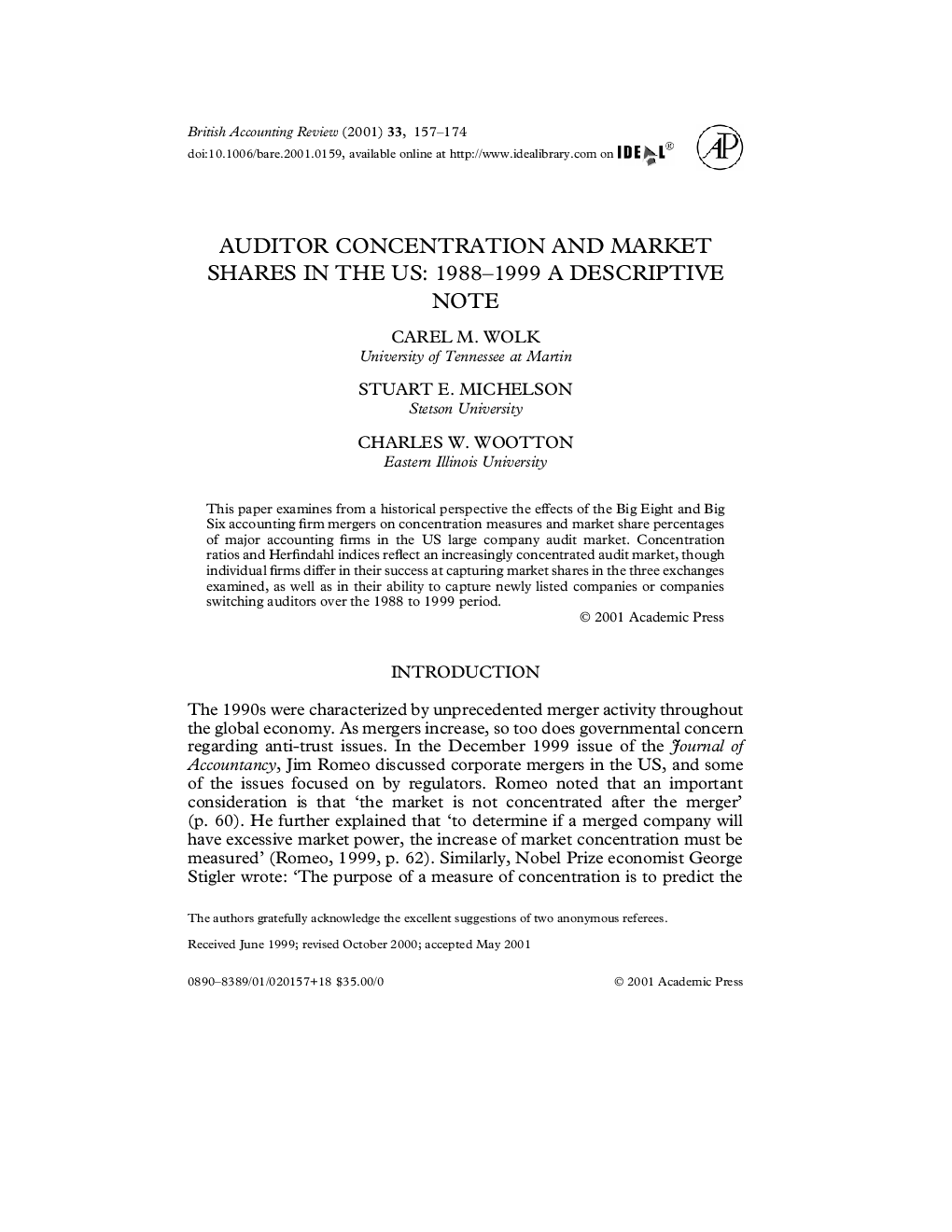 This paper examines from a historical perspective the effects of the Big Eight and Big Six accounting firm mergers on concentration measures and market share percentages of major accounting firms in the US large company audit market. Concentration ratios and Herfindahl indices reflect an increasingly concentrated audit market, though individual firms differ in their success at capturing market shares in the three exchanges examined, as well as in their ability to capture newly listed companies or companies switching auditors over the 1988 to 1999 period.

The 1990s were characterized by unprecedented merger activity throughout the global economy. As mergers increase, so too does governmental concern regarding anti-trust issues. In the December 1999 issue of the Journal of Accountancy , Jim Romeo discussed corporate mergers in the US, and some of the issues focused on by regulators. Romeo noted that an important consideration is that ‘the market is not concentrated after the merger’ (p. 60). He further explained that ‘to determine if a merged company will have excessive market power, the increase of market concentration must be measured’ (Romeo, 1999, p. 62). Similarly, Nobel Prize economist George Stigler wrote: ‘The purpose of a measure of concentration is to predict theextent of the departure of price (or alternatively, of rate of return) from the competitive level’ (seeStigler, 1968, p. 30). To provide some insight into this assessment, this paper examines current auditor concentration within the US, putting it in a historical context. When four Big Eight accounting firms merged in 1989, concerns were raised about the increased level of accounting/auditor concentration. Apprehension arose again in 1997, when two of the resulting Big Six accounting firms announced their merger (effective in 1998), creating the Big Five. The Financial Times in an editorial (Consolidating Accounts, 1997, p. 13) wrote: ‘Not only is this undesirable on competitive grounds; it will also allow the merged firm to exercise an unhealthy degree of influence over the standards and practices of the profession as a whole’. This paper updates and expands upon prior research by investigating the effects of the 1989 and 1998 accounting firm mergers on the concentration within the market for audit services in the US. To investigate such effects, concentration ratios and Herfindahl indices are developed. Additionally, the impact on the market shares of the merged firms is considered. In this respect, we are motivated by the 1985 Mueller study of 1000 companies in which he concluded that merged companies did not necessarily increase their market shares when compared to companies that did not merge. Although mergers can have an immediate effect on measures of auditor concentration and market shares, over time there are confounding factors that can alter the consequences of such mergers (Beattie & Fearnley, 1994, pp. 303–304). To help isolate such factors, the success of major firms in securing clients as auditor switches and companies entering the market is examined. The paper concludes with a discussion of other factors that may influence the competitive outcomes of the mergers.

Comparisons of pre and post-merger concentration measures indicate that the Big Eight and Big Six mergers have impacted concentration and marketstructure in the large client audit market in the US. Four, six, and eight firm concentration ratios have substantially increased over the 1988–1999 period. While the four firm Herfindahl index reflects a balanced market due to the relatively equal competitive market shares of the four leading firms, the six and eight firm Herfindahl indices illustrate an increasing imbalance among the firms. This imbalance is due to the disparity in firm size and the relatively small audit market shares held by the second tier firms included in the index calculation subsequent to the mergers (and evidencing an increase in concentration among the top firms combined with an inability on the part of second tier firms to approach an equilibrium with the top firms). In regard to the effects of the Big Eight mergers on individual market shares, results differ. The merged firm of Ernst & Young was able to maintain its market share, consistent with the combined pro forma numbers for the two separate firms. In contrast, Deloitte & Touche lost market share (based on clients) subsequent to the merger of Deloitte Haskins & Sells and Touche Ross. Beattie & Fearnley (1994) point out that in order for a firm to maintain its market share, it must capture a corresponding percentage of newly listed companies and secure a corresponding percentage of companies that switch auditors. Apparently, Deloitte & Touche was not entirely successful at doing this. It is probably too early to completely assess the market effects of the Price Waterhouse and Coopers & Lybrand merger. Although concentration levels and market structure are important indicators of the competition that exists within an industry, past competitive practices and pricing patterns provide insights for the implications of mergers on competition as well. For more than twenty years, the large client audit market has been considered as concentrated and at the same time competitive. This conclusion has been drawn in both the financial press (e.g. Bernstein, 1978; Palmer, 1989; Crane, 1990; Okell, 1991; Kelly, 1995) as well as by academic researchers (e.g. Dopuch & Simunic, 1980; Danos & Eichenseher, 1986; Hermanson et al ., 1987; Maher et al ., 1992; Copley, 1993; Wootton et al ., 1994; Brown et al ., 1995; Balsam, 1996). While corporations have been willing to pay more for a Big Eight/Six audit (Simunic, 1980; Francis & Simon, 1987; Chung & Lindsay, 1988), it appears that the demand for the audit service of an individual firm is relatively price elastic. Several writers (Bedingfield & Loeb, 1974; Eichenseher & Shields, 1983; Lynn, 1988; Beattie & Fearnley, 1998) have concluded that audit fees are an important factor in a company’s decision to change auditors and then in a company’s consideration of its new auditor. It appears that accounting firms are aware of the importance of audit prices, and studies (DeAngelo, 1981a; Simon & Francis, 1988; Ettredge & Greenberg, 1990) show that firms sometimes ‘lowball’ their fees in order to obtain an audit. Securing an audit is often looked upon as a way to gain access to a corporation’s demand for other services, which can be more profitable.Moreover, as corporations merge and downsize, cost reductions have become very important. In the movement for greater cost containment, audit fees can become a commodity to minimize. As such, corporations may be less likely to accept increases in audit costs without significant perceived value added. Thus, although in the rapidly changing accounting profession nothing is certain, these realities may provide incentives for accounting firms to continue to competitively price their audit services.