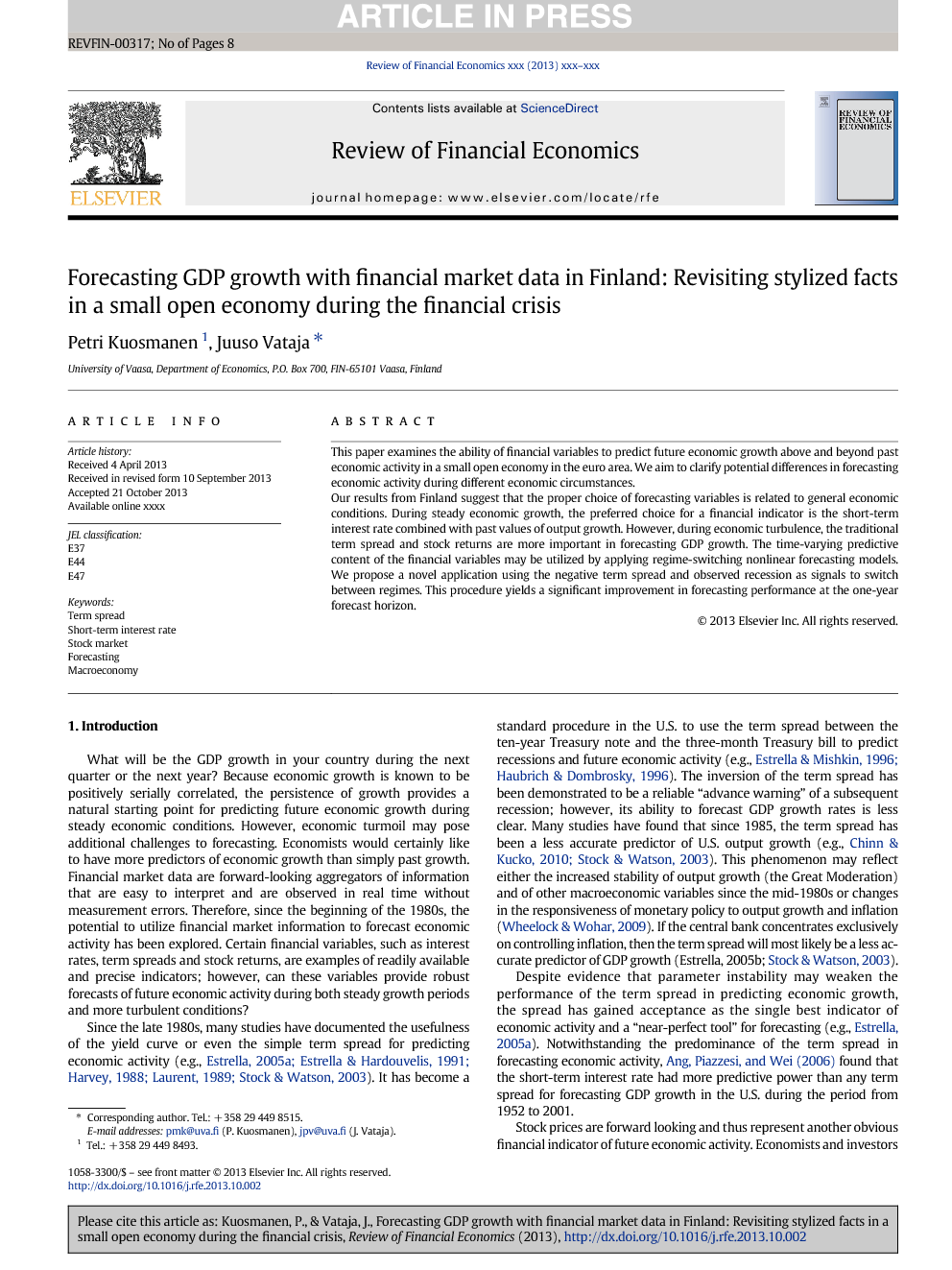 This paper examines the ability of financial variables to predict future economic growth above and beyond past economic activity in a small open economy in the euro area. We aim to clarify potential differences in forecasting economic activity during different economic circumstances. Our results from Finland suggest that the proper choice of forecasting variables is related to general economic conditions. During steady economic growth, the preferred choice for a financial indicator is the short-term interest rate combined with past values of output growth. However, during economic turbulence, the traditional term spread and stock returns are more important in forecasting GDP growth. The time-varying predictive content of the financial variables may be utilized by applying regime-switching nonlinear forecasting models. We propose a novel application using the negative term spread and observed recession as signals to switch between regimes. This procedure yields a significant improvement in forecasting performance at the one-year forecast horizon.

The purpose of this study was to reinvestigate and clarify the predictive content of readily available and easily observable financial market variables for forecasting future GDP growth during both normal and exceptional economic circumstances. Our results address Finland, a small open economy in the euro area that was heavily influenced by the financial crisis. Our results confirm the usefulness of financial market information for forecasting future economic activity. The proper selection of financial market indicator variables is found to be related to the general health of the economy. During steady growth periods, short term interest rates and past values of output growth play a dominant role in forecasting economic activity. In contrast, during economic turbulence, the importance of the traditional term spread and stock returns markedly increases. Our results also indicate that stock returns as a sole financial predictor of GDP growth perform rather poorly. However, combining stock returns with other financial indicators improves forecasting performance. In general, the evidence from this study is largely consistent with the previous literature, and the results are not necessarily specific to only small open economies. During the financial crisis and its aftermath, central banks were nearly out of conventional monetary policy tools at the bounds that were imposed by a zero interest rate policy. However, it was remarkable that the term spread continued to have predictive power despite being almost entirely determined by the long-term interest rates, which highlights the importance of the long-term rates in determining the level of the term spread. Moreover, stock markets continued to signal the expected effects of unconventional monetary policy on economic growth, even though the short-term interest rates were close to zero lower bound. If the Great Moderation is over and unconventional monetary tools are the New Normal in Western economies, we may expect that stock markets and especially the term spread will regain much of their earlier status in forecasting GDP growth. The main policy implication of this study is that different forecasting models and financial variables are needed, depending on the state of the economy. Due to the time-varying predictive content of the financial variables, forecasters must identify in real time when to switch forecasting models. For that reason, we propose the use of the inversion-recession signal, which makes it possible to use simple and practical regime-switching nonlinear models to forecast growth during different economic circumstances. However, the universality of this proposition remains to be resolved.