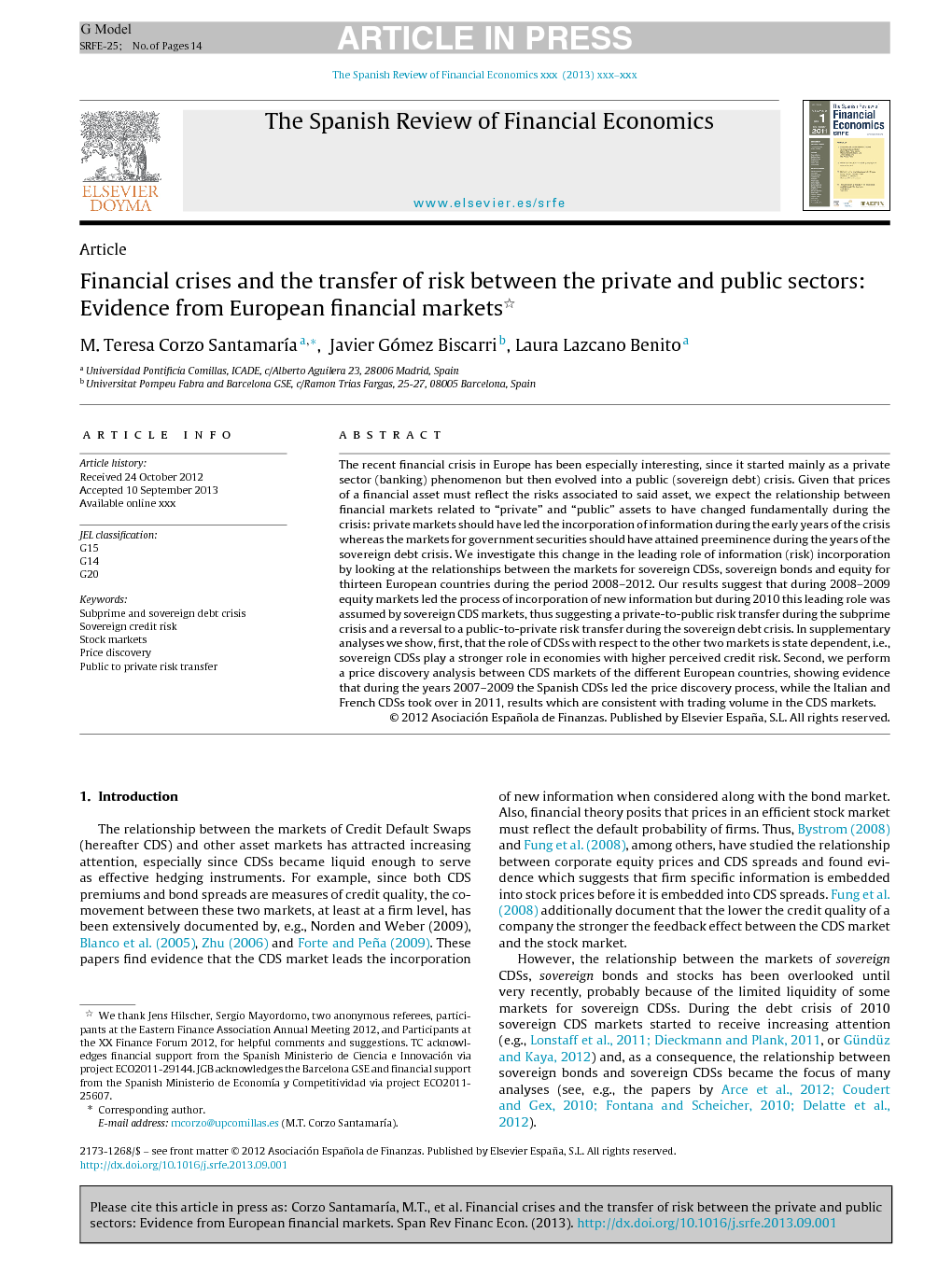 The recent financial crisis in Europe has been especially interesting, since it started mainly as a private sector (banking) phenomenon but then evolved into a public (sovereign debt) crisis. Given that prices of a financial asset must reflect the risks associated to said asset, we expect the relationship between financial markets related to “private” and “public” assets to have changed fundamentally during the crisis: private markets should have led the incorporation of information during the early years of the crisis whereas the markets for government securities should have attained preeminence during the years of the sovereign debt crisis. We investigate this change in the leading role of information (risk) incorporation by looking at the relationships between the markets for sovereign CDSs, sovereign bonds and equity for thirteen European countries during the period 2008–2012. Our results suggest that during 2008–2009 equity markets led the process of incorporation of new information but during 2010 this leading role was assumed by sovereign CDS markets, thus suggesting a private-to-public risk transfer during the subprime crisis and a reversal to a public-to-private risk transfer during the sovereign debt crisis. In supplementary analyses we show, first, that the role of CDSs with respect to the other two markets is state dependent, i.e., sovereign CDSs play a stronger role in economies with higher perceived credit risk. Second, we perform a price discovery analysis between CDS markets of the different European countries, showing evidence that during the years 2007–2009 the Spanish CDSs led the price discovery process, while the Italian and French CDSs took over in 2011, results which are consistent with trading volume in the CDS markets.

In this paper we investigate the relationships between the markets for sovereign bonds and CDSs and the stock markets for a wide sample of European countries. We start our study by justifying the link between sovereign debt markets and stock markets, an area where limited work has been done so far. While at a firm level, finance theory suggests that an efficient stock market should incorporate information on the default probability of firms in a timely manner, there have been few attempts to measure a “country's equity”. We argue, however, that the country's firms proxy for this equity and, thus, the country's credit information should flow to stock markets (and vice versa), so a worsening credit situation of the companies should be reflected in the country's credit quality. Second, we looked at the process of information incorporation into the three markets (sovereign bonds and CDSs and stocks). Our results confirm the hypothesis that in the early stages of the crisis private (stock) markets led the process whereas in later stages the direction of the risk transfer changed and sovereign markets led this process. Our findings are in line with those of Arce et al. (2012), Coudert and Gex (2010) and Fontana and Scheicher (2010). A country-by-country analysis shows that debt markets lagged the stock markets during 2007–2009, while credit markets, CDS markets to be precise, led the incorporation of new information during 2010. During 2011, stock markets recovered the leading role in many economies and the sovereign bond market gained in importance. We find that these relationships are state dependent: CDSs played a stronger leading role in economies with higher perceived credit risk. Overall, our results are strongly consistent with a private-to-public risk transfer during the subprime crisis and a public-to-private risk transfer during the European sovereign credit crisis. Third, given the high level of commonality in sovereign credit spreads already reported in the literature, we analyze the relationship between the different European CDSs. During 2007–2009, we find CDSs of several countries obeying equilibrium relationships. Interestingly, the Spanish CDS turns out to be the market where price discovery takes place and where informed traders transact most (a result which at first may seem surprising, but which is aligned with the large observed trade volume in Spanish CDSs). During 2010, the different CDS markets lost their equilibrium relationship but we still find that movements in the German CDS Granger cause the movements in the rest of European CDSs, thus confirming a sort of German price leadership. In 2011, CDSs respond to equilibrium relationships again, but during that period Italy becomes the country in which information is embedded first, a finding which is also coherent with the behavior of trading volume. Some countries, such as Greece, Portugal and Ireland – all of them distressed economies – are not included in the 2011 price discovery analysis because of the non-stationarity of their credit swap spreads.