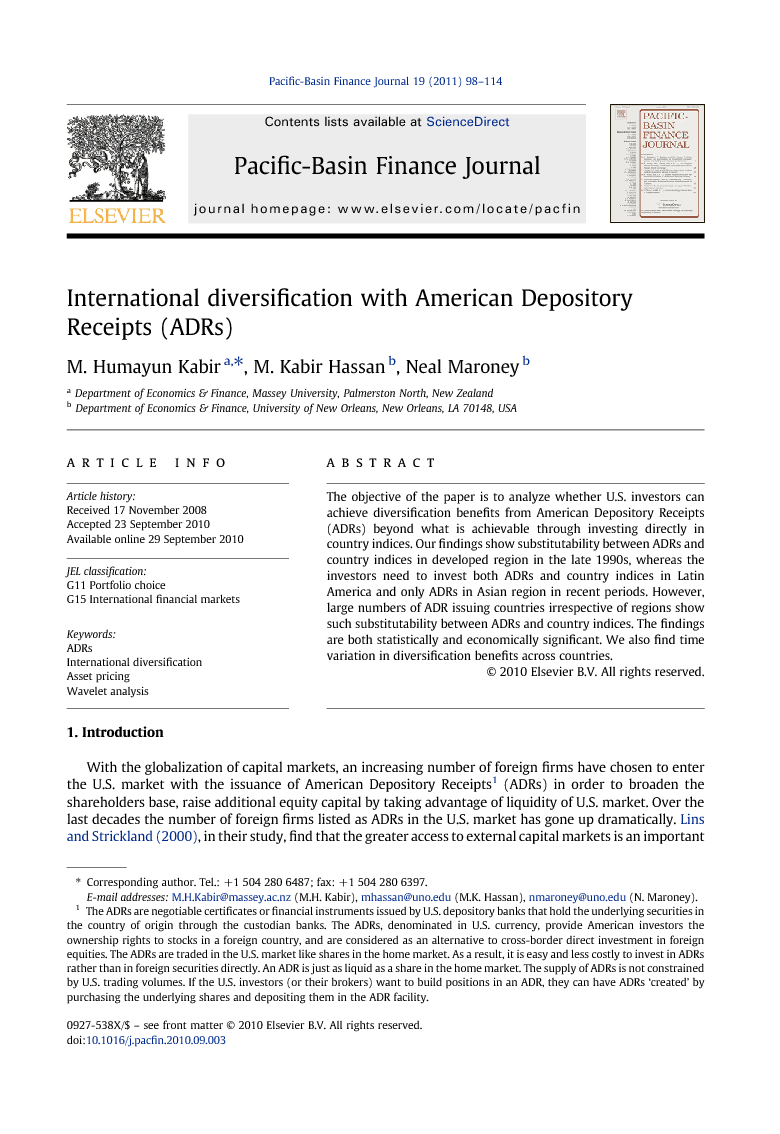 The objective of the paper is to analyze whether U.S. investors can achieve diversification benefits from American Depository Receipts (ADRs) beyond what is achievable through investing directly in country indices. Our findings show substitutability between ADRs and country indices in developed region in the late 1990s, whereas the investors need to invest both ADRs and country indices in Latin America and only ADRs in Asian region in recent periods. However, large numbers of ADR issuing countries irrespective of regions show such substitutability between ADRs and country indices. The findings are both statistically and economically significant. We also find time variation in diversification benefits across countries.

With the globalization of capital markets, an increasing number of foreign firms have chosen to enter the U.S. market with the issuance of American Depository Receipts1 (ADRs) in order to broaden the shareholders base, raise additional equity capital by taking advantage of liquidity of U.S. market. Over the last decades the number of foreign firms listed as ADRs in the U.S. market has gone up dramatically. Lins and Strickland (2000), in their study, find that the greater access to external capital markets is an important benefit of a U.S. stock market listing, especially for emerging markets firms. The enlisted foreign firms that are subject to SEC reporting and disclosure requirements reduce informational disadvantages, and agency costs of controlling shareholders due to better protections for firms coming from countries with poor investors' rights. As a result, firms with higher growth opportunities coming from countries with poor investors' rights are valued highly Doidge, Karolyi, and Stulz, 2004). The objective of the present study is to find the diversification potential of ADRs in different regions, and in countries from the perspective of a U.S. investor. Given the opportunity to invest directly in the shares of stocks in the developed (DCs) and emerging (EM) markets, it is interesting to know whether the U.S. investors can potentially gain any benefits by investing in ADRs. It is already well known that U.S. investors can achieve higher gains by investing directly in emerging markets (Harvey, 1995; Bekaert and Urias, 1999; De Santis and Gerald, 1997 and De Santis, 1997). Since ADRs are traded in the U.S. market these have been considered as alternatives to such cross-border investments while ensuring higher diversification benefits. However, a small fraction of these ADRs are, in fact, enlisted on major U.S. exchanges. Most of the ADRs are unlisted, and traded OTC (level I), and they maintain home country accounting standard, and do not require SEC registration. Only level II and level III ADRs are enlisted, and comply with SEC regulations. These ADRs can be considered as the subset of country shares. Moreover, ADRs traded in the U.S. market are mostly big firms in their home countries, and it is likely that they have lower diversification benefits than a typical foreign firm. Solnik (1991) also expressed his doubt on higher diversification from ADRs. As s result we pose this question: can ADRs provide as much diversification gains as the country indices? Most of the studies on ADRs show how combining ADRs with U.S. market or other funds can reduce risk without sacrificing expected returns (Officer and Hoffmeister, 1988 and Wahab and Khandwala, 1993). A number of studies (Choi and Kim, 2000, Kim et al., 2000 and Alaganar and Bhar, 2001) find the determinants of ADR returns in the context of a single or multi-factor models. Jiang (1998) finds that while a combined portfolio of U.S. market and ADRs perform better, any investment decisions intended for long-run cannot assume that ADRs and local market portfolios are substitutes for each other. Bekaert and Urias (1999) conduct a spanning test for closed-end funds, open-end funds, and ADRs of emerging market with a set of benchmark for the period of September 1993 to August 1996, and found the diversification benefits for closed-end funds and ADRs. Errunza, Hogan, and Hung (1999) show the incremental gains in diversification beyond what is achievable from home-made portfolio, and the gains diminish over time. The contribution of the present study is that it shows how the case of diversification with ADRs varies not only across regions over different sample periods but also with the size of ADR markets measured by the number of ADRs irrespective of country of origins. We also explore the possible combination of assets U.S. investors require to hold in different regions and countries with respect to diversification. We also focus on the significance of diversification benefits in a framework of utility based measure of certainty equivalence. In order to see whether diversification benefits are time-varying we employ a new method called wavelet analysis to estimate correlation at different time-scales. We use both regression-based and SDF-based spanning tests rather than standard index models. Unlike the index models, spanning tests are not subject to benchmarking error, as they do not rely on a specific benchmark asset pricing model.2 We find substitutability between ADRs and country indices in developed region in the late 1990s, whereas the investors need to invest both ADRs and country indices in Latin America and only ADRs in Asian region in recent times. However, large numbers of ADRs issuing countries irrespective of regions show such substitutability between ADRs and country indices. The findings are both statistically and economically significant. We also find time variation in diversification benefits across countries.

The objective of this paper is to measure the diversification benefits of different country ADR portfolios from the perspective of a U.S. investor. Studies on ADRs show indirect evidence of achievable diversification benefits. Given the opportunity to invest directly in the shares of stocks in the developed (DCs) and emerging (EM) markets, it is interesting to know whether the U.S. investors can potentially gain any benefits by investing in ADRs. Our findings show that U.S. investors need to invest in both ADRs and country portfolios in developed countries in the early periods and in Latin American countries in the nineties. During the early and late nineties, we find substitutability between ADRs and country portfolios in DCs. As more and more ADRs are enlisted in the US market from developed countries over time, the ADRs become substitutes to country. Similarly, countries with higher number of ADRs irrespective of regions show the same pattern of substitutability between ADRs and country indices. However, such substitutability does not exist for countries with the highest number of ADRs by the end of sample period 2007. The certainty equivalent approach identifies that such substitutability are economically significant. On the other hand, U.S. investors can achieve the diversification benefits by investing ADRs along with U.S. market index in Asia. By utilizing the wavelet correlation analysis, we find that diversification benefits vary across countries over time. Higher diversification gains may be achievable in relatively longer period-holding (more than 4 months period) of ADRs from some countries like France, Italy, Spain, Germany, Ireland, Switzerland, and Brazil. For ADRs from Australia, Japan, Netherlands, Sweden, United Kingdom, New Zealand, Mexico, and Chile U.S. investors can get benefits at a very short-term period. Investment in Asian ADRs, in general, for relatively shorter horizon might result in higher diversification benefits even though we find some fluctuations in correlation for a few countries.