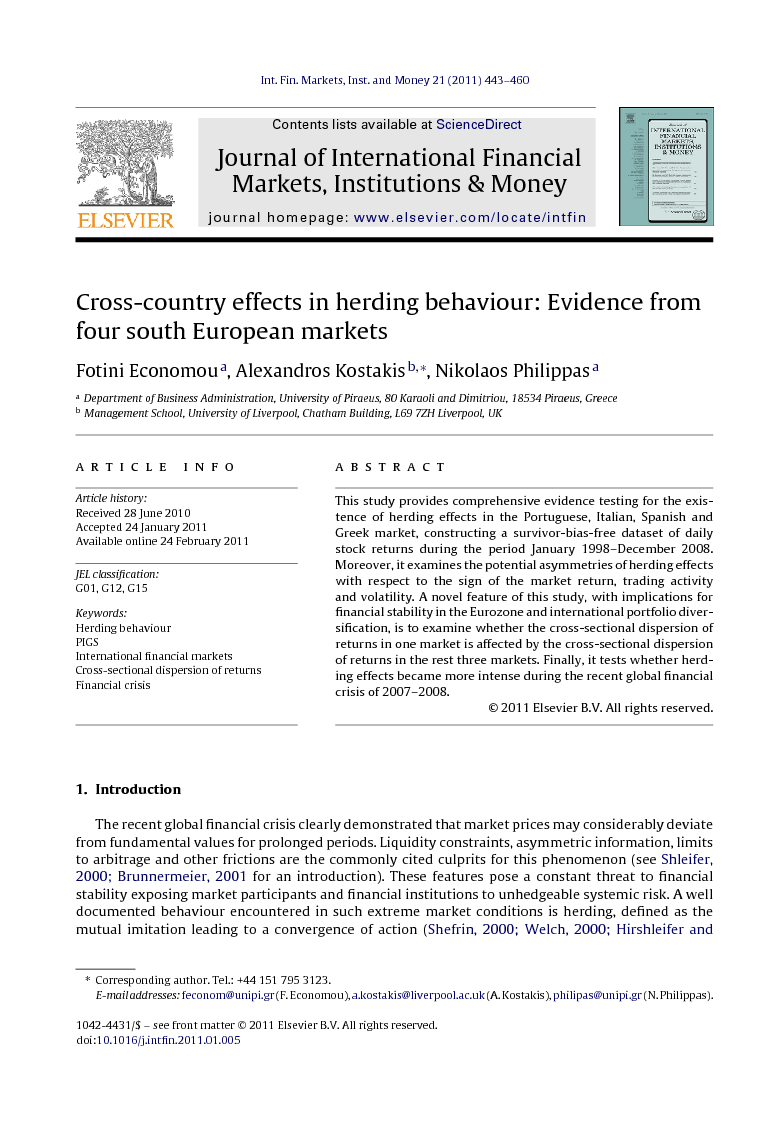 This study provides comprehensive evidence testing for the existence of herding effects in the Portuguese, Italian, Spanish and Greek market, constructing a survivor-bias-free dataset of daily stock returns during the period January 1998–December 2008. Moreover, it examines the potential asymmetries of herding effects with respect to the sign of the market return, trading activity and volatility. A novel feature of this study, with implications for financial stability in the Eurozone and international portfolio diversification, is to examine whether the cross-sectional dispersion of returns in one market is affected by the cross-sectional dispersion of returns in the rest three markets. Finally, it tests whether herding effects became more intense during the recent global financial crisis of 2007–2008.

This study provides comprehensive evidence testing for the existence of herding effects in the Portuguese, Italian, Spanish and Greek market. These four countries have been anecdotally termed “PIGS” by the financial press and market analysts due to their macroeconomic imbalances and the unsustainability of their fiscal policy stance. The ongoing debt crisis that these countries face is feared to pose a serious threat to the stability of Eurozone. As a result, it is worth examining a series of market mechanisms that may pull the trigger of a regional financial crisis and herding behaviour is long regarded to be a prime suspect. We construct a survivor-bias-free dataset consisted of daily returns for all stocks listed in these four markets for the period January 1998–December 2008. Calculating the commonly used CSAD measure that proxies the cross-sectional dispersion of stock returns in each market, we conduct a battery of tests to detect potential herding effects. Our results show that herding effects are present mainly in the Greek and the Italian market. We find no such evidence for the Spanish market, while the evidence is mixed for the case of Portugal. Dissecting further this evidence, we find that herding effects present significant asymmetries when consider rising and falling markets, days with high and low trading activity and volatility. Given this evidence, that confirms prior findings in the literature, we suggest that future studies take these asymmetries into account. A key finding of our study that is of particular importance for both international investors and policy makers is that there is a great degree of co-movement in the cross-sectional returns’ dispersion across these four markets. This feature makes more likely the potential coordination of “herding forces” in the region and the occurrence of a financial crisis. Moreover, it demonstrates that international portfolio diversification benefits are rather small when these markets are considered. Given the importance of this issue, future international studies should test for the existence of such co-movements in the cross-sectional dispersions of returns. Finally, a positive finding with respect to stability is that the recent global financial crisis did not induce a more intense herding behaviour in any of the four markets considered.