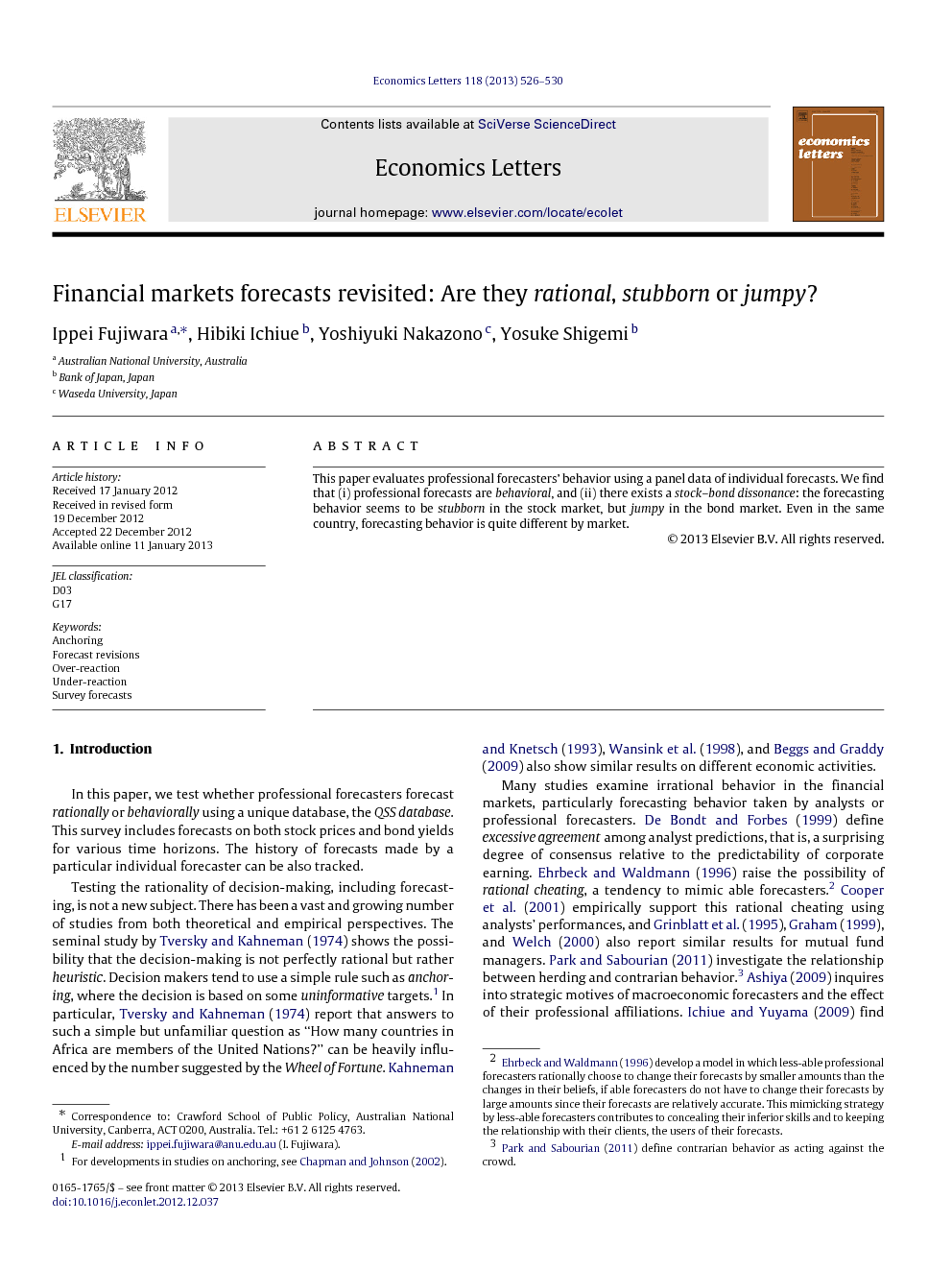 In this paper, we test whether professional forecasters forecast rationally or behaviorally using a unique database, the QSS database. This survey includes forecasts on both stock prices and bond yields for various time horizons. The history of forecasts made by a particular individual forecaster can be also tracked. Testing the rationality of decision-making, including forecasting, is not a new subject. There has been a vast and growing number of studies from both theoretical and empirical perspectives. The seminal study by Tversky and Kahneman (1974) shows the possibility that the decision-making is not perfectly rational but rather heuristic. Decision makers tend to use a simple rule such as anchoring, where the decision is based on some uninformative targets. 1 In particular, Tversky and Kahneman (1974) report that answers to such a simple but unfamiliar question as “How many countries in Africa are members of the United Nations?” can be heavily influenced by the number suggested by the Wheel of Fortune. Kahneman and Knetsch (1993), Wansink et al. (1998), and Beggs and Graddy (2009) also show similar results on different economic activities. Many studies examine irrational behavior in the financial markets, particularly forecasting behavior taken by analysts or professional forecasters. De Bondt and Forbes (1999) define excessive agreement among analyst predictions, that is, a surprising degree of consensus relative to the predictability of corporate earning. Ehrbeck and Waldmann (1996) raise the possibility of rational cheating, a tendency to mimic able forecasters. 2 Cooper et al. (2001) empirically support this rational cheating using analysts’ performances, and Grinblatt et al. (1995), Graham (1999), and Welch (2000) also report similar results for mutual fund managers. Park and Sabourian (2011) investigate the relationship between herding and contrarian behavior. 3 Ashiya (2009) inquires into strategic motives of macroeconomic forecasters and the effect of their professional affiliations. Ichiue and Yuyama (2009) find irrationality of professional forecasts for the Fed Funds futures market. Previous studies also report behavioral biases in terms of sensitivity of forecasts to new information. For example, Abarbanell and Bernard (1992) show that security analysts under-react to earnings information. Amir and Ganzach (1998) use the Institutional Brokers Estimate System (IBES) database and find that analysts’ earnings forecasts over-react when the forecast revisions are positive and under-react when the forecast revisions are negative. Using the forecasts on the GDP in Japan, Ashiya (2003) reports that forecasters tend to over-react to new information. We revisit biases of forecasting behavior with a new, unique database. The estimation results show that (i) professional forecasts are behavioral, namely, significantly influenced by past forecasts, (ii) there exists a stock–bond dissonance: while forecasting behavior in the stock market seems to be stubborn in the sense that forecasts stick to previous forecasts or under-react to new information, forecasting behavior in the bond market seems to be jumpy in the sense that forecasts tend to be negatively related to past forecasts or over-react to unexpected information, and (iii) the dissonance is due, at least partially, to the individual forecasters’ behavior, which is influenced by their own past forecasts rather than others’. We also show that forecasting behavior in the Japanese financial markets has little to do with individual experiences as professional forecasters. This finding is contrary to the previous studies such as Hong et al. (2000) and Lamont (2002), but is consistent with the results in Ashiya and Doi (2001). These are new results, and they imply a complex forecasting behavior in Japanese financial markets. Even in the same country, forecasting behavior is quite different by market. This suggests that the nature of professionals in the stock market is fundamentally different from that in the bond market. This might be caused by the fact that many respondents do not report for both stock and bond markets, and that the composition of the stock market forecasters is different from that of the bond market forecasters. Findings reported by Ashiya (2009) and Nakazono (2012) seem to be related here. They report that forecasting behavior can be quite different by professional affiliation. The remainder of this paper is structured as follows. Section 2 shows the details of the data used in this paper and estimation strategy. Then, we report estimation results in Section 3. Finally, Section 4 concludes.