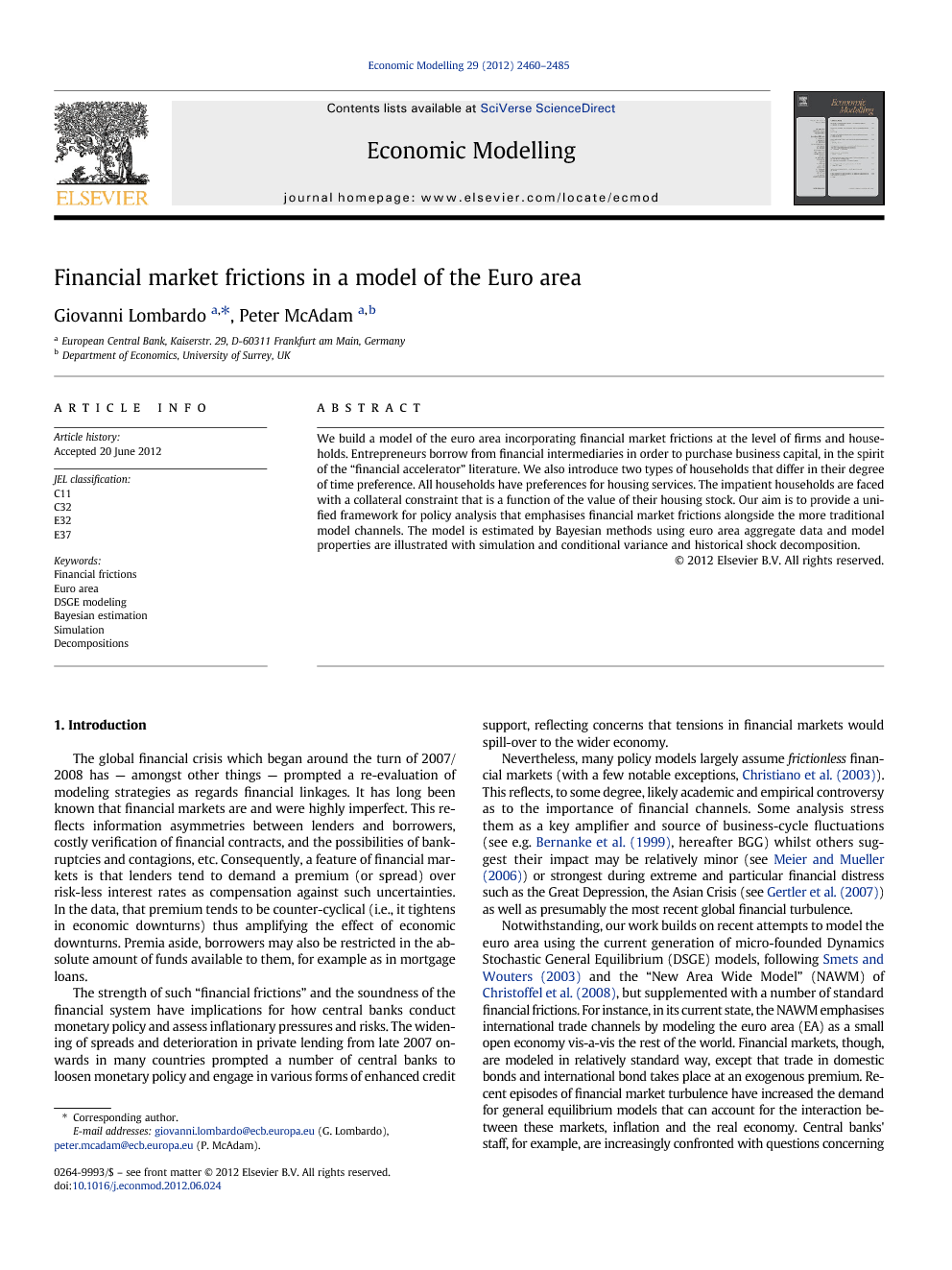 We build a model of the euro area incorporating financial market frictions at the level of firms and households. Entrepreneurs borrow from financial intermediaries in order to purchase business capital, in the spirit of the “financial accelerator” literature. We also introduce two types of households that differ in their degree of time preference. All households have preferences for housing services. The impatient households are faced with a collateral constraint that is a function of the value of their housing stock. Our aim is to provide a unified framework for policy analysis that emphasises financial market frictions alongside the more traditional model channels. The model is estimated by Bayesian methods using euro area aggregate data and model properties are illustrated with simulation and conditional variance and historical shock decomposition.

The global financial crisis which began around the turn of 2007/2008 has — amongst other things — prompted a re-evaluation of modeling strategies as regards financial linkages. It has long been known that financial markets are and were highly imperfect. This reflects information asymmetries between lenders and borrowers, costly verification of financial contracts, and the possibilities of bankruptcies and contagions, etc. Consequently, a feature of financial markets is that lenders tend to demand a premium (or spread) over risk-less interest rates as compensation against such uncertainties. In the data, that premium tends to be counter-cyclical (i.e., it tightens in economic downturns) thus amplifying the effect of economic downturns. Premia aside, borrowers may also be restricted in the absolute amount of funds available to them, for example as in mortgage loans. The strength of such “financial frictions” and the soundness of the financial system have implications for how central banks conduct monetary policy and assess inflationary pressures and risks. The widening of spreads and deterioration in private lending from late 2007 onwards in many countries prompted a number of central banks to loosen monetary policy and engage in various forms of enhanced credit support, reflecting concerns that tensions in financial markets would spill-over to the wider economy. Nevertheless, many policy models largely assume frictionless financial markets (with a few notable exceptions, Christiano et al. (2003)). This reflects, to some degree, likely academic and empirical controversy as to the importance of financial channels. Some analysis stress them as a key amplifier and source of business-cycle fluctuations (see e.g. Bernanke et al. (1999), hereafter BGG) whilst others suggest their impact may be relatively minor (see Meier and Mueller (2006)) or strongest during extreme and particular financial distress such as the Great Depression, the Asian Crisis (see Gertler et al. (2007)) as well as presumably the most recent global financial turbulence. Notwithstanding, our work builds on recent attempts to model the euro area using the current generation of micro-founded Dynamics Stochastic General Equilibrium (DSGE) models, following Smets and Wouters (2003) and the “New Area Wide Model” (NAWM) of Christoffel et al. (2008), but supplemented with a number of standard financial frictions. For instance, in its current state, the NAWM emphasises international trade channels by modeling the euro area (EA) as a small open economy vis-a-vis the rest of the world. Financial markets, though, are modeled in relatively standard way, except that trade in domestic bonds and international bond takes place at an exogenous premium. Recent episodes of financial market turbulence have increased the demand for general equilibrium models that can account for the interaction between these markets, inflation and the real economy. Central banks' staff, for example, are increasingly confronted with questions concerning the interaction between asset prices, inflation monetary policy. Our work is a first step in the direction of putting existing and well-known euro area models in the position of being able to address these type of questions. We extend the baseline model by introducing financial market frictions that can give rise to an interaction between financial market variables and the rest of the economy. There are two common ways of modeling financial constraints: i) via limited enforceability and collateralised debt ( Iacoviello (2005)) and ii) via costly state verification and default risk (e.g. BGG). Here we use both. The first is used to model the financial constraints faced by households. The second is used to model the constraint faced by firms. Both financing schemes generate a link between the net worth of agents and their creditworthiness, and so would be equally suitable to describe both household finance and firms finance. Nevertheless the collateral constraint model generates quantitative rationing leaving the cost of funds at the risk-less rate level. The costly-state-verification model, instead does not limit the level of debt, but generates instead a cost of funds that is larger than the risk-less rate. Both features are of interest and should ideally be combined: the quantitative constraint could be more powerful in generating spillovers to the real economy; the premium effect has the benefit of reflecting real world interest rate spreads. Aoki et al. (2004) use the BGG for the housing market in a simplified general equilibrium model. Christensen et al. (2007) estimate a DSGE model for Canada with borrowing constraints for both firms and households. We show that the introduction of financial market frictions in the typical DSGE framework can provide important insights on the response of the economy to financial market shocks, although it need not alter dramatically the predictions on the response of the economy to non-financial shocks. Furthermore, our extensions allow us to explain the effects of non-financial shocks on important financial variables as external-finance premia, house prices and residential investment. The paper proceeds as follows. Section 2 describes the model.1Section 3 takes a general look at the data and underlying calibration and shock structure of the model. We then examine, in Section 4, the Bayesian estimation of variants of the model. This is followed by an examination of the model properties: simulation exercises; stylised facts matching; conditional variance and historical decompositions. Finally, we conclude.

We estimated a model of the euro area following the recent contributions of Christoffel et al. (2008) and Smets and Wouters (2003), with the addition and distinction of allowing for a number of financial frictions. These related to the allowance of an external finance premia on entrepreneurs' purchases of capital from unconstrained households, and from the existence of collateral constraints on household purchases by unconstrained households. We presented estimation results obtained from a linear state-space representation of the model using Bayesian methods. We then explored various aspects of the model's properties — such as standard impulse response analysis, its implied sample moments relative to the observed data and forecast error variance decompositions and historical shock decompositions. Although — relative to a model without the same financial frictions — the simulation properties are mostly not qualitatively affected, the model's ability to track and enhance our understanding of the evolution of financial variables and the strength of financial channels, makes the model a valuable addition to modeling work in the euro area. Recently, the literature on financial frictions and financial crises has expanded dramatically. Many of these extensions include substantial non-linearities (for example, in “occasionally binding” constraints); in modeling a monopolistically competitive banking sector and banking entry and exit costs; in modeling the channels involved in “unconventional” monetary policy (i.e., central banks inter-temporally directly taking private assets onto their balance sheet); accounting for imperfect pass-through between riskless and lending rates; debt-deflation spirals; and sudden stops, etc. The challenge for future modeling in this area will be to assess to which extent large production policy and projection models can go beyond the incorporation of simpler financial frictions (as analysed here) to these more extensive features whilst still retaining tractability.