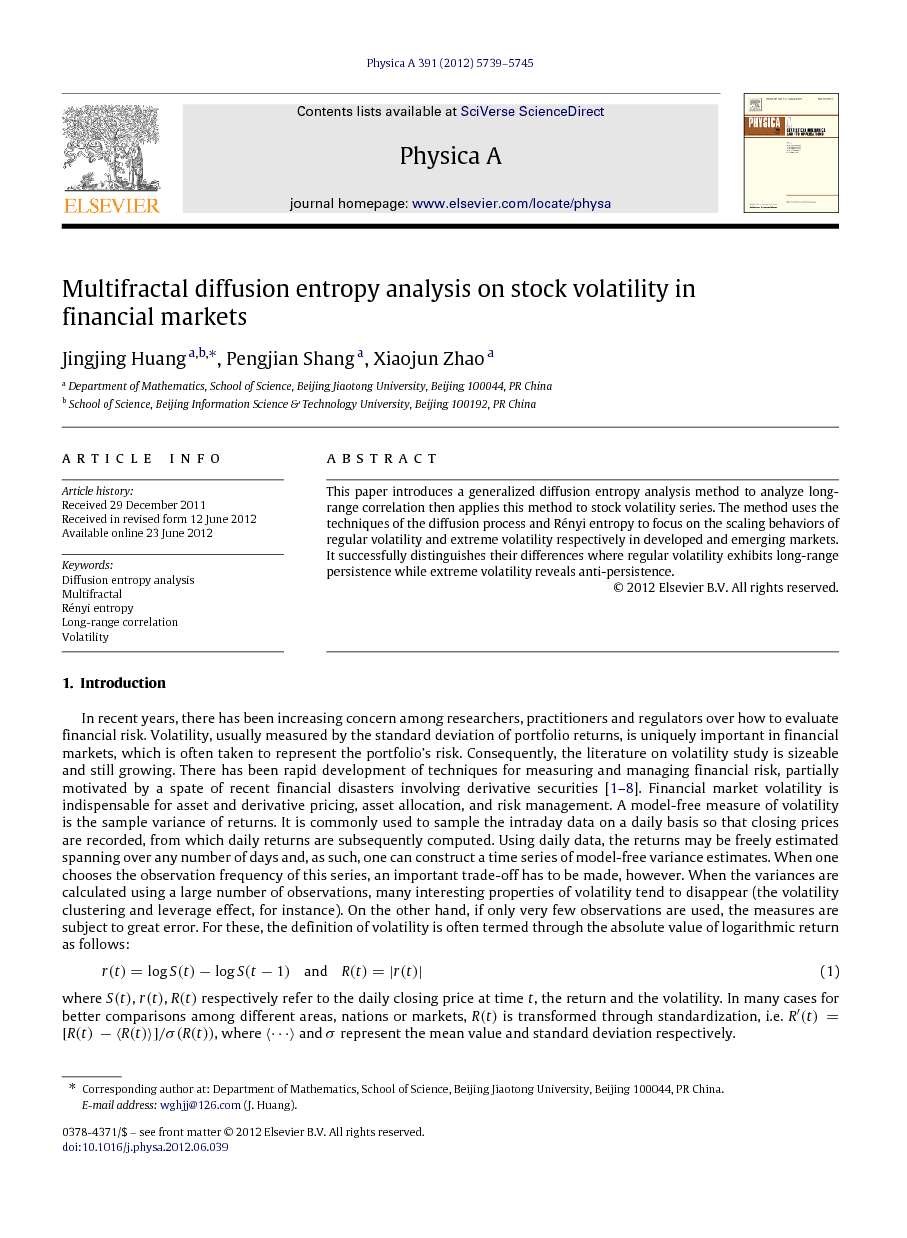 In recent years, there has been increasing concern among researchers, practitioners and regulators over how to evaluate financial risk. Volatility, usually measured by the standard deviation of portfolio returns, is uniquely important in financial markets, which is often taken to represent the portfolio’s risk. Consequently, the literature on volatility study is sizeable and still growing. There has been rapid development of techniques for measuring and managing financial risk, partially motivated by a spate of recent financial disasters involving derivative securities [1], [2], [3], [4], [5], [6], [7] and [8]. Financial market volatility is indispensable for asset and derivative pricing, asset allocation, and risk management. A model-free measure of volatility is the sample variance of returns. It is commonly used to sample the intraday data on a daily basis so that closing prices are recorded, from which daily returns are subsequently computed. Using daily data, the returns may be freely estimated spanning over any number of days and, as such, one can construct a time series of model-free variance estimates. When one chooses the observation frequency of this series, an important trade-off has to be made, however. When the variances are calculated using a large number of observations, many interesting properties of volatility tend to disappear (the volatility clustering and leverage effect, for instance). On the other hand, if only very few observations are used, the measures are subject to great error. For these, the definition of volatility is often termed through the absolute value of logarithmic return as follows: equation(1) View the MathML sourcer(t)=logS(t)−logS(t−1)andR(t)=|r(t)| Turn MathJax on where S(t)S(t), r(t)r(t), R(t)R(t) respectively refer to the daily closing price at time tt, the return and the volatility. In many cases for better comparisons among different areas, nations or markets, R(t)R(t) is transformed through standardization, i.e. View the MathML sourceR′(t)=[R(t)−〈R(t)〉]/σ(R(t)), where 〈⋯〉〈⋯〉 and σσ represent the mean value and standard deviation respectively. Recently, the long-range correlation detection of multifractal time series has attracted more attention and has become an active area of research for statistical physicists. Many traditional techniques and newly developed methods were used to explore possible scaling behavior of stock return and volatility in developed as well as emerging markets [9], [10], [11], [12], [13], [14], [15], [16], [17] and [18]. Relative researches focused on long-range correlation which provided possibilities to gain insight into the complex, irregular, chaotic and vulnerable (to policies) financial series characterization and their long-range pattern of evolution, and offered approaches to minimize risk as well as predict their future dynamical trend. A frequently used approach to quantitatively estimate the correlation of stationary time series {x(i)},i=1,2,…,N{x(i)},i=1,2,…,N is the correlation function View the MathML sourceC(s)=∑i=1N−s[x(i)−x̄][x(i+s)−x̄]/σx2. NN refers to the series length, ss refers to the time delay, View the MathML sourcex̄ denotes the global average and σx2σx2 denotes the standard deviation. The series is termed as long-range correlated if C(s)∼s−γC(s)∼s−γ and correlation exponent γγ satisfies 0<γ<10<γ<1, in which case the mean correlation time View the MathML sourceT=∑s=1∞C(s)ds diverges for infinitely long series. The correlation exponent or so-called scaling exponent, as expected, plays a crucial role in estimating the long-range correlation. However, for nonstationary time series the average View the MathML sourcex̄ is not well-defined thus the definition of C(s)C(s) gets problematic. Other alternative methods for stationary fractal time series include spectral analysis, Hurst’s rescaled-range analysis, fluctuation analysis, etc. However, real-world complex dynamics often exhibit anomalous, chaotic, irregular and nonstationary characterizations integrated by varieties of factors including internal drive and external disturbance. The selection of an appropriate technique is crucial for accurate analysis especially for a real financial system. The methods currently used to determine the scaling exponent of a complex dynamic process described by a nonstationary time series mainly include: (i) the wavelet analysis deriving from signal theory and frequency decompositions [19] and [20]; (ii) the detrended fluctuation analysis constructed on random walk and detrended variance [21] and [22]; (iii) the diffusion entropy analysis (DEA) based on diffusion process and Shannon entropy [23], [24] and [25]. The advantage of the DEA method is that it can determine the correct scaling exponent even when the statistical properties are anomalous or strange kinetics are involved. In this paper, the DEA method is extended to the multifractal case then applied to distinguish the differences of long-range scaling behaviors between regular volatility and extreme volatility. The underlying ideas behind such application include: (i) the volatility series shows a clustering phenomenon, which can be considered as the basic element of regular pattern; (ii) extreme volatility really plays a crucial role in risk management and selection of portfolio. The paper is organized as follows. In Section 2, we introduce the concept of Rényi entropy and propose the multifractal diffusion entropy analysis (MDEA). In Section 3, we study the long-range scaling behaviors of standard volatilities of the developed market and emerging market for empirical analysis. A brief conclusion is presented in Section 4.