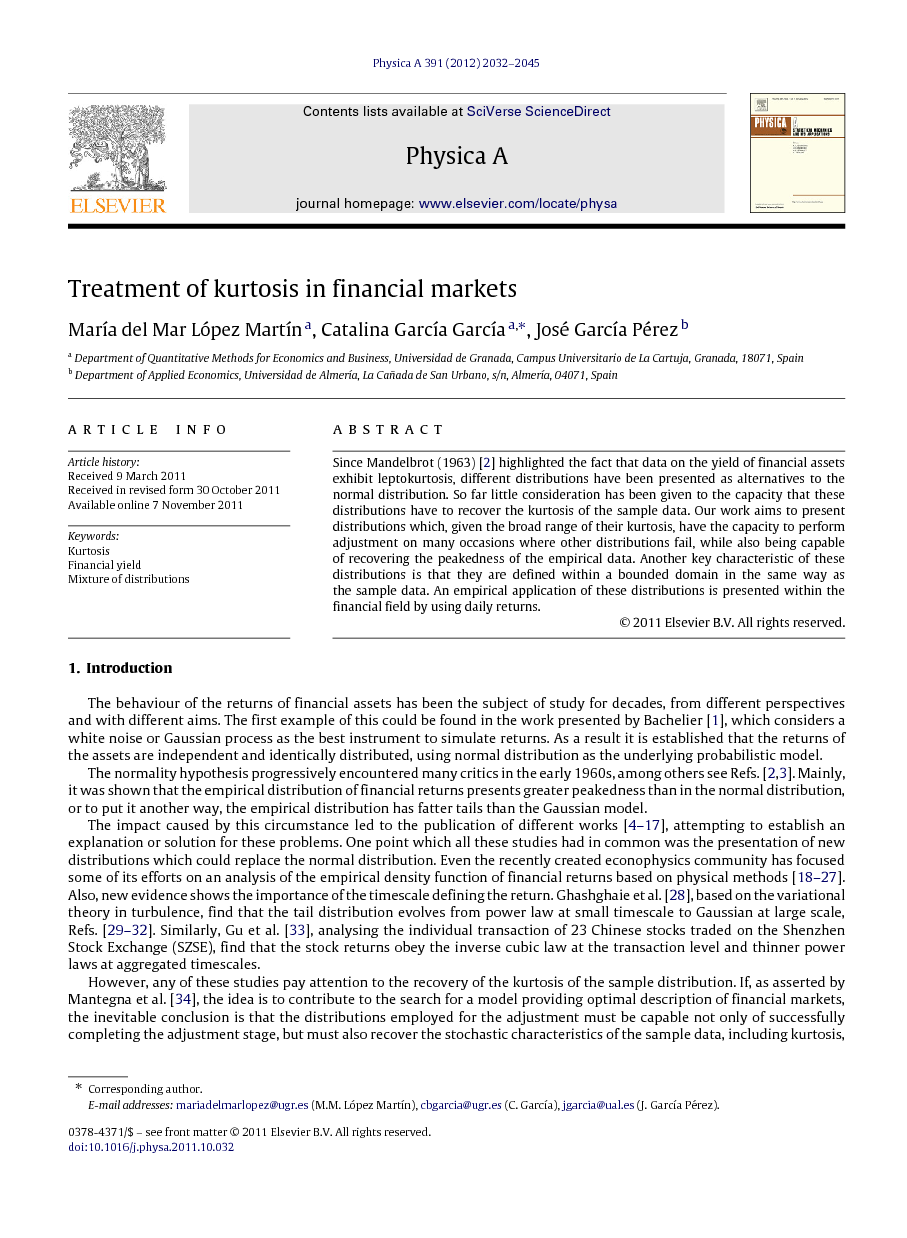 The behaviour of the returns of financial assets has been the subject of study for decades, from different perspectives and with different aims. The first example of this could be found in the work presented by Bachelier [1], which considers a white noise or Gaussian process as the best instrument to simulate returns. As a result it is established that the returns of the assets are independent and identically distributed, using normal distribution as the underlying probabilistic model. The normality hypothesis progressively encountered many critics in the early 1960s, among others see Refs. [2] and [3]. Mainly, it was shown that the empirical distribution of financial returns presents greater peakedness than in the normal distribution, or to put it another way, the empirical distribution has fatter tails than the Gaussian model. The impact caused by this circumstance led to the publication of different works [4], [5], [6], [7], [8], [9], [10], [11], [12], [13], [14], [15], [16] and [17], attempting to establish an explanation or solution for these problems. One point which all these studies had in common was the presentation of new distributions which could replace the normal distribution. Even the recently created econophysics community has focused some of its efforts on an analysis of the empirical density function of financial returns based on physical methods [18], [19], [20], [21], [22], [23], [24], [25], [26] and [27]. Also, new evidence shows the importance of the timescale defining the return. Ghashghaie et al. [28], based on the variational theory in turbulence, find that the tail distribution evolves from power law at small timescale to Gaussian at large scale, Refs. [29], [30], [31] and [32]. Similarly, Gu et al. [33], analysing the individual transaction of 23 Chinese stocks traded on the Shenzhen Stock Exchange (SZSE), find that the stock returns obey the inverse cubic law at the transaction level and thinner power laws at aggregated timescales. However, any of these studies pay attention to the recovery of the kurtosis of the sample distribution. If, as asserted by Mantegna et al. [34], the idea is to contribute to the search for a model providing optimal description of financial markets, the inevitable conclusion is that the distributions employed for the adjustment must be capable not only of successfully completing the adjustment stage, but must also recover the stochastic characteristics of the sample data, including kurtosis, since excess kurtosis is the starting point for all works following on from that of Fama [3]. Then, the aim pursued by this work is to find distributions, which in addition to adjusting the data, are capable of recovering the peakedness of the empirical distribution. It should be understood that if we focus on peakedness of the empirical data, the aim must be not only to adjust the data but also to ensure that the adjusted distribution reveals a similar kurtosis to that observed in the empirical data. See Fig. 1. Full-size image (37 K) Fig. 1. The kurtosis is a symptom of the problem. Should it be part of the solution? Figure options The use of mixtures to be found in the literature may have been one of the most successful attempts in achieving this goal. Press [35] proposed a mixture of the Poisson distribution and normal distribution, Praetz [36] obtained the Student distribution as the mixture of the normal distribution and the inverted gamma distribution, Madan and Seneta [37] employed the distribution obtained by mixing the normal and gamma distributions. Please note that all these distributions are defined in an unbounded domain. In a different field, Hahn [38] presents the mixture of the uniform and beta distributions, known as the beta-rectangular distribution. This probabilistic model is characterised by its considerable capacity to model rare events revealing fat tails. By applying Hahn’s idea we mix the two-sided power (TSP) [39], the generalised biparabolic (GBP) [40] and the generalised bicubic (GBC) [41], with the uniform distribution. The distributions obtained present greater peakedness than that presented by normal distribution and with the ability to adjust the empirical data and recover their kurtosis. The work is structured as follows. In Section 2 a literature revision is shown. Section 3 presents the construction of the U-TSP, U-GBP and U-GBC distributions, their adaptation to the financial field and an analysis of some of their key stochastic characteristics. Section 4 analyses the peakedness presented by each probabilistic model. Section 5 includes a practical application employing the DJ Eurostoxx50 index, while Section 6 sets out the conclusions.

Construction of the distributions U-TSP, U-GBP and U-GBC extends the range of probabilistic models available for adjustment of the returns of financial assets. These distributions are also defined in a limited domain, as are the data they aim to adjust. In contrast to the student tt, Pearson Type IV, Levy stable and qq-Gaussian distributions, distributions proposed in this paper present a cumulative distribution function that can be expressed in a closed form using elementary functions. These probabilistic models can achieve kurtosis levels above 150 and, as highlighted in their practical application, are capable of recovering the kurtosis of empirical data; in other words, following adjustment, the models reveal a very similar peakedness to that of the data. Our principal contribution is to provide models that recover the stochastic characteristics of the sample data, including kurtosis, since excess kurtosis is the starting point for all works following on from that of Fama [3]. Also, we are trying to equilibrate the relative scarcity of bounded distributions that contrasts with the multitude unbounded continuous distribution developed during the 20th century. Meanwhile, these models can be employed in other fields since their parameters are easy to elicit on the basis of the information contributed by the expert.