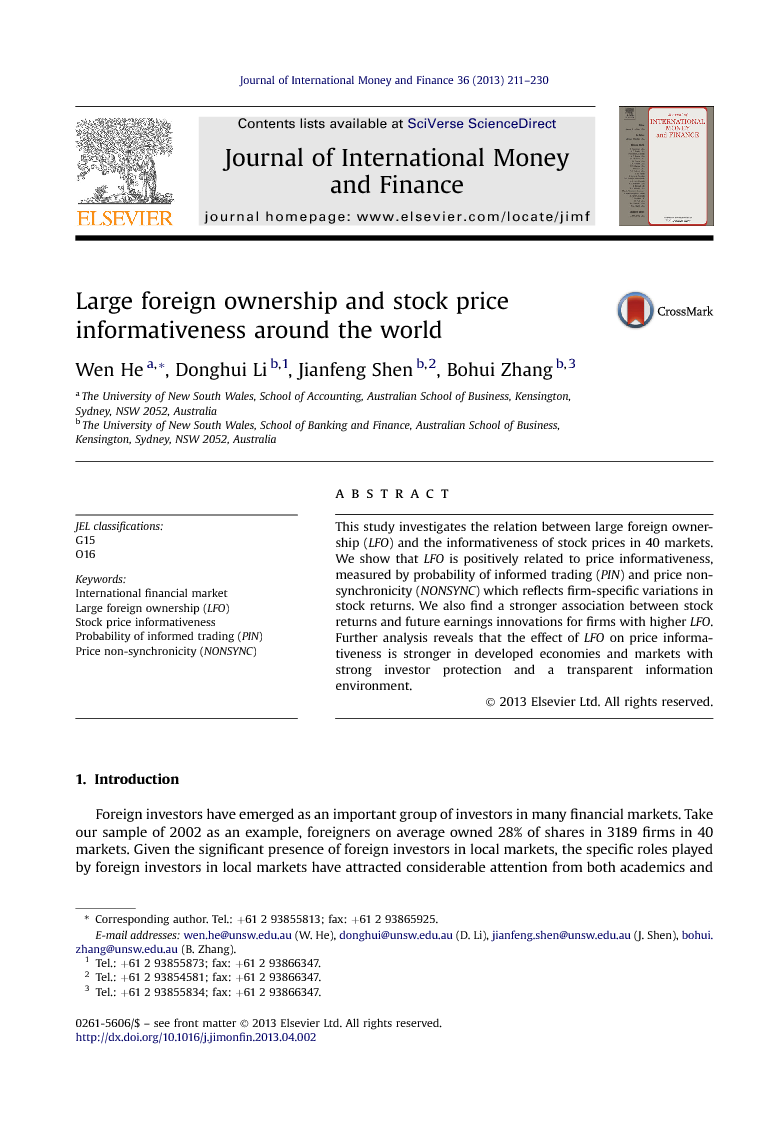 This study investigates the relation between large foreign ownership (LFO) and the informativeness of stock prices in 40 markets. We show that LFO is positively related to price informativeness, measured by probability of informed trading (PIN) and price non-synchronicity (NONSYNC) which reflects firm-specific variations in stock returns. We also find a stronger association between stock returns and future earnings innovations for firms with higher LFO. Further analysis reveals that the effect of LFO on price informativeness is stronger in developed economies and markets with strong investor protection and a transparent information environment.

With the increase in cross-border equity investments due to financial globalization, the economic roles played by foreign equity investors attract significant attention from both regulators and academics. In terms of asset pricing implications, most existing studies focus on the benefits of risk-sharing among investors across borders and the reduction in cost of capital associated with the lifting of the cross-border investment barriers. In this study, we investigate another potential economic benefit of foreign equity investment, the improved informativeness of asset prices, which has not been sufficiently studied in existing literature. Specifically, we study the informational role of large foreign shareholders who are expected to matter most among foreign equity investors. Using a cross section of 3189 firms from 40 markets in 2002, we find evidence that firms with a higher LFO tend to have more informative stock prices, measured by the probability of informed trading and price non-synchronicity. Further, stock prices of these firms also tend to be more informative about contemporaneous and future earnings innovations. These results suggest that large foreign shareholders contribute to the informativeness of stock prices. Using several measures of the strength of macro governance infrastructure, we find that LFO seems to matter more in markets with stronger macro governance forces, such as those with a more developed economy, better investor protection, and a more transparent information environment. These findings are consistent with macro governance forces facilitating the effect of LFO on price informativeness, and echo recent evidence of the complementarity between market-level and firm-level governance forces in Doidge et al. (2007). Overall, our findings shed some light on the roles of foreign investors in local markets and the effects of capital market opening. We find evidence consistent with the positive role of large foreign shareholders in improving the informativeness of stock prices in local markets. Further, macro governance infrastructure seems to affect the extent to which large foreign shareholders could play this informational role. Our study is subject to several limitations. First, price informativeness is unobservable and we have to make inferences based on some empirical proxies. Both proxies of price informativeness, the probability of informed trading (PIN) and price non-synchronicity (NONSYNC), have been shown to capture the information content of prices theoretically and empirically in the previous literature (e.g., Easley et al., 1997; Morck et al., 2000). We also substantiate the findings with further evidence based on a more direct and intuitive measure of price informativeness – the extent to which stock returns reflect earnings news. However, we are aware that the validity of inferences that we draw from our results depends on whether our measures of price informativeness adequately capture the extent to which information is incorporated into stock prices. We caution readers of this important assumption when interpreting our results. Second, our inferences are based on the cross-sectional regression results, which reveal correlations rather than causality. We address the endogeneity issue partially by running regressions of price informativeness measures in year 2003 on LFO and control variables in year 2002. Further, our findings from cross-market analyses are difficult to be explained by the reverse causality. However, due to data limitations, we are unable to conduct more sophisticated analyses such as Granger causality test and (semi) natural experiment, to infer the causality more directly. Given these limitations, we are unable to completely exclude alternative explanations, and we again caution readers of this issue.