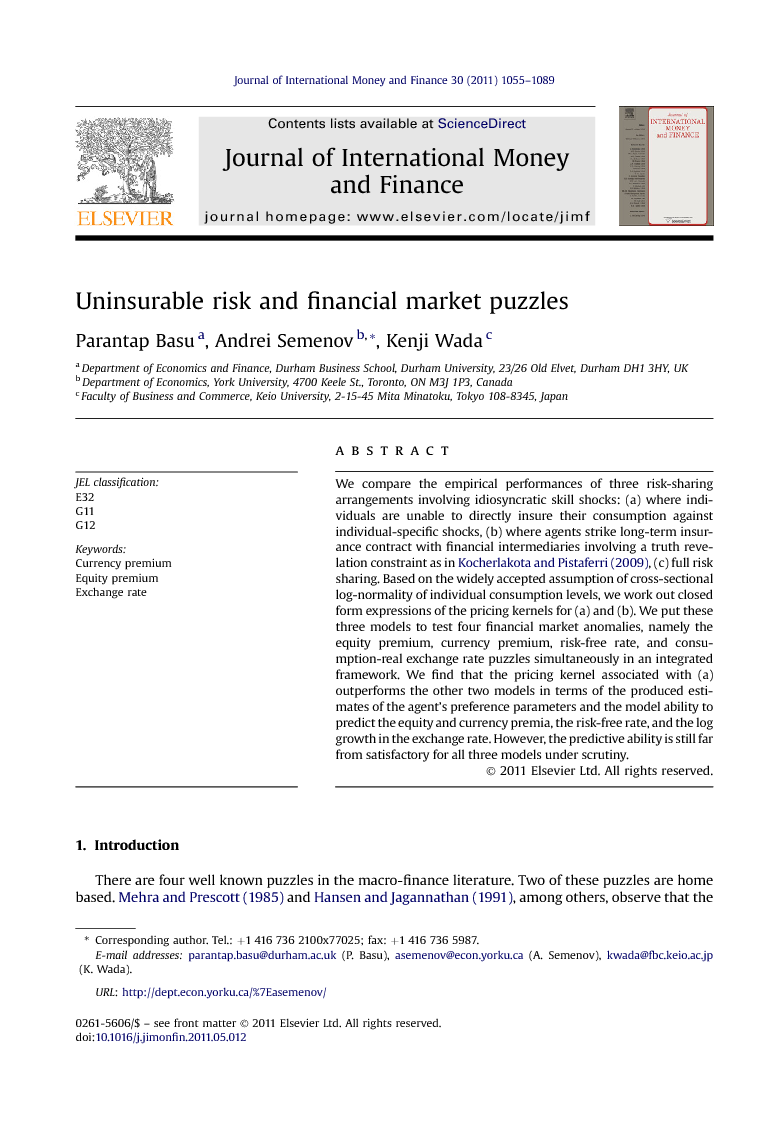 We compare the empirical performances of three risk-sharing arrangements involving idiosyncratic skill shocks: (a) where individuals are unable to directly insure their consumption against individual-specific shocks, (b) where agents strike long-term insurance contract with financial intermediaries involving a truth revelation constraint as in Kocherlakota and Pistaferri (2009), (c) full risk sharing. Based on the widely accepted assumption of cross-sectional log-normality of individual consumption levels, we work out closed form expressions of the pricing kernels for (a) and (b). We put these three models to test four financial market anomalies, namely the equity premium, currency premium, risk-free rate, and consumption-real exchange rate puzzles simultaneously in an integrated framework. We find that the pricing kernel associated with (a) outperforms the other two models in terms of the produced estimates of the agent’s preference parameters and the model ability to predict the equity and currency premia, the risk-free rate, and the log growth in the exchange rate. However, the predictive ability is still far from satisfactory for all three models under scrutiny.

This paper addresses four extant financial market anomalies, namely (i) the equity premium puzzle, (ii) the risk-free rate puzzle, (iii) the consumption-real exchange rate puzzle, and (iv) the currency premium puzzle. We investigate the potential of two candidate pricing kernels, which allow incomplete risk sharing in economies with consumer heterogeneity, to resolve these anomalies in an integrated framework. The first pricing kernel corresponds to the market structure with domestically incomplete (DI) financial markets, where idiosyncratic privately observed shocks are uninsured, while sequential trade in assets enables agents to partially hedge publicly observed shocks. We refer to this stochastic discount factor as the DI pricing kernel. The second stochastic discount factor is the pricing kernel that describes the market environment in which both private and public shocks are insured subject to truth revelation constraint by agents. Kocherlakota and Pistaferri (2007) call it the Private Information Pareto Optimal (PIPO) stochastic discount factor. Based on the widely accepted assumption of cross-sectional log-normality of individual consumption levels, we work out closed form expressions for these two pricing kernels. Our derived stochastic discount factors are new to the literature. We test empirically both these stochastic discount factors using household-level data on consumption expenditures from the US and the UK. To investigate whether the assumption of incomplete risk sharing plays an important role in explaining asset returns, we compare the results for the PIPO and DI pricing kernels with the results obtained under the assumption of complete risk sharing (the complete risk-sharing (CRS) model). In contrast with Kocherlakota and Pistaferri, 2007 and Kocherlakota and Pistaferri, 2009, when assessing the empirical performance of each candidate stochastic discount factor, we address the four financial puzzles in an integrated framework with the same pricing kernel in all the equations. Using the GMM estimation technique, we find that, when the Euler equations for the equity premium, the risk-free rate of return, and the currency premium, as well as the regression equation for the log growth in the exchange rate are estimated jointly, in contrast with the CRS and PIPO models, the DI model yields economically plausible estimates of both the relative risk aversion coefficient and the subjective time discount factor. The DI model is also found to outperform the PIPO and CRS models in predicting the equity premium, the risk-free rate, the log growth in the exchange rate, and the currency premium. It must, however, be mentioned that, although the DI model outperforms the CRS and PIPO models, this model does not allow precise estimation of the relative risk aversion coefficient and the predictive ability of this model is still far from satisfactory. Our results are robust to the used measure of consumption, sample design, proxy for the market portfolio, and variables in the agents’ information set. These findings suggest that the asset pricing anomalies considered in this paper may be even deeper than one usually thinks. Although it is often possible to find a pricing kernel that enables to explain a puzzle of interest in isolation, it is much more difficult to find the stochastic discount factor that is able to jointly explain several asset pricing anomalies. The conclusion about the relative performance of pricing kernels in solving an asset pricing anomaly in isolation may change substantially when several anomalies are considered jointly in an integrated framework. We conjecture that the forecasting performances of these models can be further improved by using a richer utility specification. For example, one can employ the Garcia et al. (2006) utility function with a reference consumption level or the Epstein and Zin, 1989 and Epstein and Zin, 1991 non-expected utility. Since in both specifications, risk aversion can be disentangled from the elasticity of intertemporal substitution as opposed to the conventional CRRA utility framework, we believe that the forecasting performances of the models with these preferences could be better. We leave this investigation for our future work.