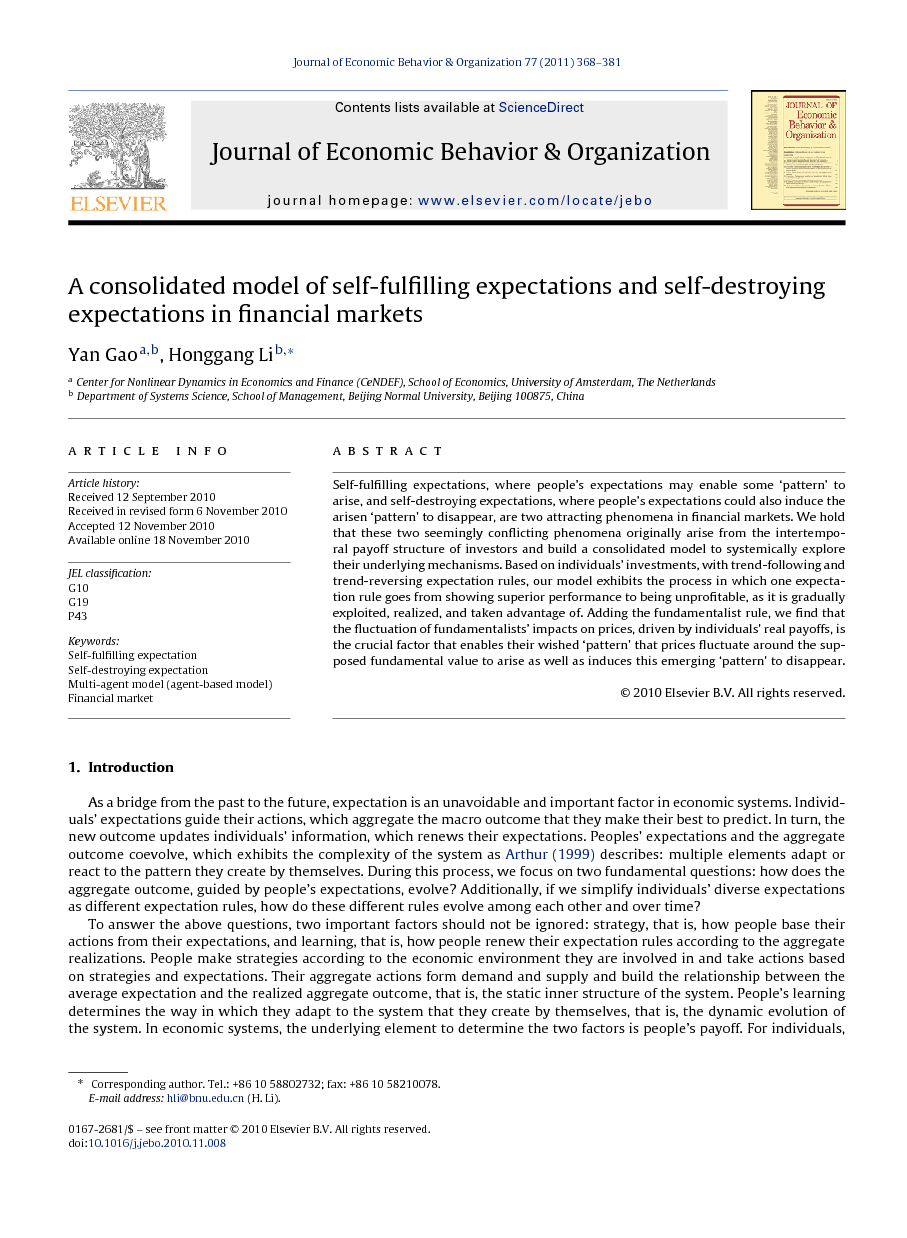 Self-fulfilling expectations, where people's expectations may enable some ‘pattern’ to arise, and self-destroying expectations, where people's expectations could also induce the arisen ‘pattern’ to disappear, are two attracting phenomena in financial markets. We hold that these two seemingly conflicting phenomena originally arise from the intertemporal payoff structure of investors and build a consolidated model to systemically explore their underlying mechanisms. Based on individuals’ investments, with trend-following and trend-reversing expectation rules, our model exhibits the process in which one expectation rule goes from showing superior performance to being unprofitable, as it is gradually exploited, realized, and taken advantage of. Adding the fundamentalist rule, we find that the fluctuation of fundamentalists’ impacts on prices, driven by individuals’ real payoffs, is the crucial factor that enables their wished ‘pattern’ that prices fluctuate around the supposed fundamental value to arise as well as induces this emerging ‘pattern’ to disappear.

As a distinct feature from natural systems, expectation adds a layer of complexity to social systems. How the aggregate outcome, guided by people's expectations, evolves and, with new realized outcomes continuously arriving, how people's expectations evolve are two natural questions and have been attracting more and more studies (Hommes and Wagener, 2009, Anufriev and Hommes, 2009, Heemeijer et al., 2009, Fehr and Tyran, 2008 and Brock and Hommes, 1998). Strategic environment has been found important in their coevolution (Heemeijer et al., 2009 and Fehr and Tyran, 2008). However, for financial markets, strategic environment is not enough to explain some phenomena emerging in their coevolution, such as ‘self-fulfilling expectations’ and ‘self-destroying expectations’, which are the focus of this paper. We propose that individuals’ payoff structure also plays an important role in their coevolution. Originating from this idea, a multi-agent model is constructed based on individuals’ investment process. With trend-following and trend-reversing expectation rules, we roughly show the life cycle of an expectation rule as described by Timmermann (2008). It comes from individuals’ real payoffs, and we consider it is the underlying feature of the phenomena of ‘self-fulfilling expectations’ and ‘self-destroying expectations’. Furthermore, we add fundamentalist rule in the market and clearly exhibit the cycle that fundamentalists’ desired ‘pattern’ (i.e., prices fluctuate around the supposed fundamental value) gradually shows up, prevails and then disappears. During this process, we find that the fluctuation of fundamentalists’ impacts on prices, which is driven by individuals’ real payoffs, is crucial for the self-fulfilment and self-destruction of their expectations. Moreover, we also find when the fundamentalist's ‘pattern’ prevails, which implies that the information provided by the fundamentalist rule is appropriately incorporated into prices, fundamentalists, composed of different members, face different and uncertain profits. From the perspective of the payoff structure, we hope that our study can make some contributions to the research on the coevolution of prices and different forecasting rules in financial markets and bring some new insights to the debates on the existence of forecasting rules with good performances and the efficiency of the financial markets (Timmermann, 2008, Timmermann and Granger, 2004, Tvede, 2002, Schmidt, 2002, Lo et al., 2000, Zhang, 1999, Menkhoff, 1997 and Campbell et al., 1997).