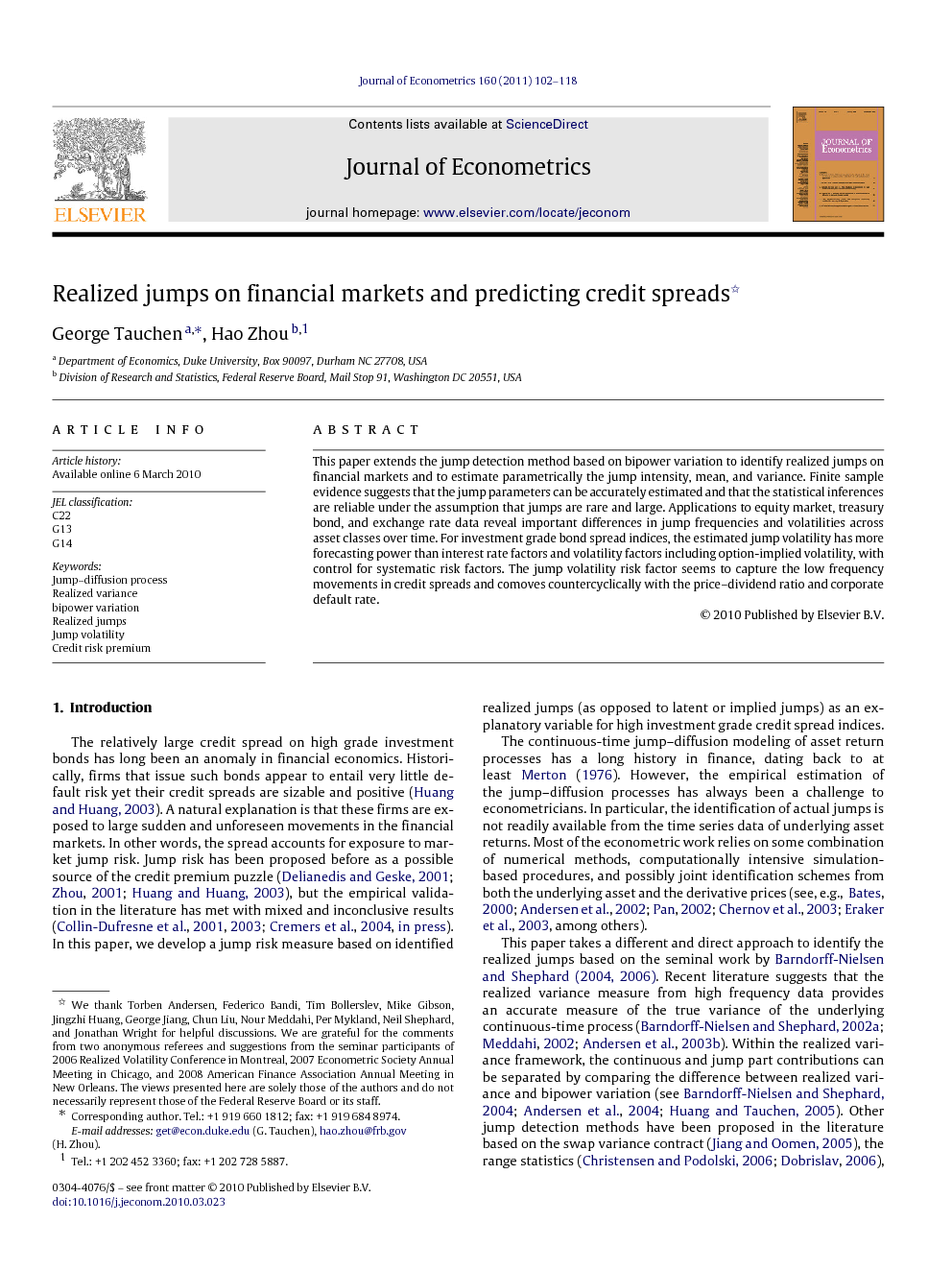 This paper extends the jump detection method based on bipower variation to identify realized jumps on financial markets and to estimate parametrically the jump intensity, mean, and variance. Finite sample evidence suggests that the jump parameters can be accurately estimated and that the statistical inferences are reliable under the assumption that jumps are rare and large. Applications to equity market, treasury bond, and exchange rate data reveal important differences in jump frequencies and volatilities across asset classes over time. For investment grade bond spread indices, the estimated jump volatility has more forecasting power than interest rate factors and volatility factors including option-implied volatility, with control for systematic risk factors. The jump volatility risk factor seems to capture the low frequency movements in credit spreads and comoves countercyclically with the price–dividend ratio and corporate default rate.

Disentangling jumps from the diffusion has always been a challenge for pricing financial assets and for estimating the jump–diffusion processes. Building on the recent jump detection literature for separating realized variance and bipower variation (Barndorff-Nielsen and Shephard, 2003, Barndorff-Nielsen and Shephard, 2004, Barndorff-Nielsen and Shephard, 2006, Andersen et al., 2004 and Huang and Tauchen, 2005), we extend the methodology to filter out the realized jumps, under two key assumptions typically adopted in financial economics: (1) jumps are rare and there is at most one jump per day, and (2) jumps are large and dominate return signs when they occur. These approximations provide a powerful tool for identifying the realized jumps in financial markets. Our Monte Carlo experiments under realistic empirical settings suggest that accurate parameter estimates and properly sized inference tests can be obtained with an appropriate choice of the significance level of the jump detection pre-test. The proposed jump identification method is applied to three financial markets — the S&P 500 index, a treasury bond, and the dollar/yen exchange rate. We find that the jump intensity varies among these asset classes from 13% to 20%. All of the jump mean estimates are insignificantly different from zero, except for the S&P 500 index driven by a positive run in late 1990s. Jump volatilities are similar for the exchange rate (0.39%), the equity market (0.53%), and the bond market (0.65%). Rolling estimates reveal that the jump probabilities are quite variable for the equity index and treasury bonds (from 5% to 25%), but relatively stable for the yen currency (20%). The jump volatility is little changed for government bonds (except for the run-up in 1992–1994), while it is elevated a great deal for the stock market from 2000 to 2004 and only moderately for the dollar/yen in the early and late 1990s. The identification of realized jumps and direct estimation of jump distributions has important implications in assessing financial market risk adjustments. Given more reliable estimates of the jump dynamics, the impact on jump risk premia can be more precisely quantified. For example, Moody’s AAA and BAA credit risk premia can be predicted using the realized jump volatility measure much better than using the usual variables such as interest rate factors, and volatility factors including option-implied volatility, under appropriate controls for systematic risk factors and lagged credit spreads. Explaining the credit spreads of high investment grade entities has always been a challenge in credit risk pricing, and a systematic jump risk factor holds some promise in resolving such an puzzle. It can be shown that the market jump volatility factor comoves with the price–dividend ratio and corporate default rate, with a correlation of 67% and 65%. The fact that jump volatility captures low frequency movements of credit spreads with a countercyclical pattern has important asset pricing implications along the lines of long-run risks (Bansal and Yaron, 2004).