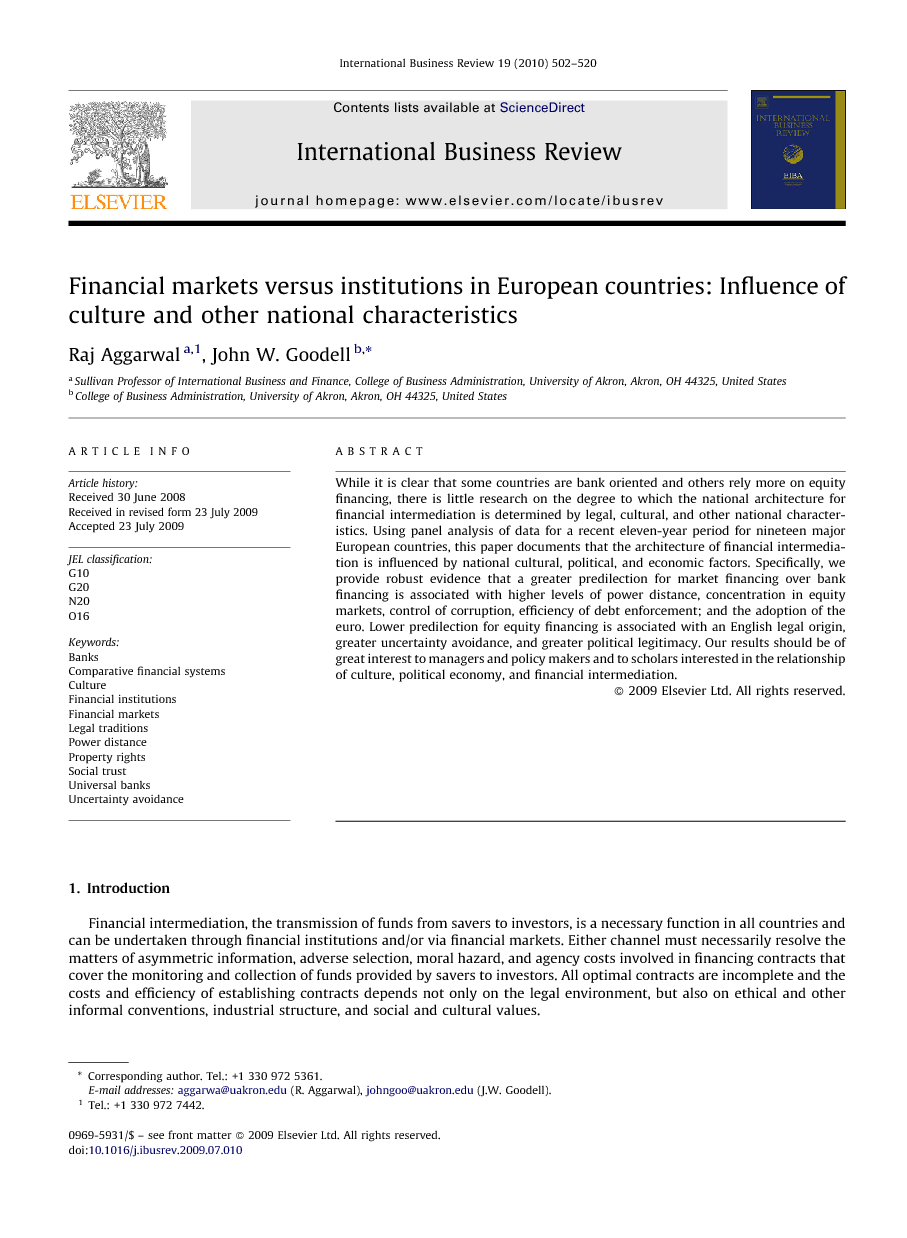 While it is clear that some countries are bank oriented and others rely more on equity financing, there is little research on the degree to which the national architecture for financial intermediation is determined by legal, cultural, and other national characteristics. Using panel analysis of data for a recent eleven-year period for nineteen major European countries, this paper documents that the architecture of financial intermediation is influenced by national cultural, political, and economic factors. Specifically, we provide robust evidence that a greater predilection for market financing over bank financing is associated with higher levels of power distance, concentration in equity markets, control of corruption, efficiency of debt enforcement; and the adoption of the euro. Lower predilection for equity financing is associated with an English legal origin, greater uncertainty avoidance, and greater political legitimacy. Our results should be of great interest to managers and policy makers and to scholars interested in the relationship of culture, political economy, and financial intermediation.

Financial intermediation, the transmission of funds from savers to investors, is a necessary function in all countries and can be undertaken through financial institutions and/or via financial markets. Either channel must necessarily resolve the matters of asymmetric information, adverse selection, moral hazard, and agency costs involved in financing contracts that cover the monitoring and collection of funds provided by savers to investors. All optimal contracts are incomplete and the costs and efficiency of establishing contracts depends not only on the legal environment, but also on ethical and other informal conventions, industrial structure, and social and cultural values. Particularly, differing forms of intermediation may be better suited for certain societies with hierarchical or autonomous orientations. This may result from the nature of the institutions of the political economy or governance structures being synchronous with the hierarchical nature of particular cultures or inevitably the “systemically consistent” nature of societies (Licht et al., 2007, Redding, 2005 and Roland, 2004). Rajan and Zingales (1998) contend that the relative adoption of institutions versus markets as channels for financial intermediation in a country may depend on the contractibility of the environment and the relative value of price signals. This paper examines, for European nations, the association of cultural measures and political factors and predilection for markets over banking while controlling for relevant economic factors. European financing system choices are assessed based on data from nineteen countries: Austria, Belgium, Czech Republic, Denmark, Finland, France, Germany, Hungary Ireland, Italy, Netherlands, Norway, Poland, Portugal, Russia, Spain, Sweden, Switzerland, and the UK. Annual estimates of relative size of financing provided by markets and by institutions and other national characteristics are collected for the recent eight-year period, 1996–2006, that includes the introduction of a common currency, the euro. Our focus on European markets is motivated by the unique role that banks traditionally have had in European society. White (1998) notes that historically banks in continental Europe have maintained a much larger share of intermediated claims than in other groups of countries, with corporate and retail banking traditionally being “overwhelmingly” done by “national” entities, with surprisingly little cross-border activity. The time period of this study straddles adoption of euro. The adoption of the euro has likely been greatly impacting European banks and markets (see Dermine & Hillion, 1999). Panel analysis for our sample is used to assess the national characteristics that are likely to be associated with a country being bank-based or markets-based. Specifically, using panel analysis on data for a recent eleven-year period for nineteen major European countries, this paper documents robust evidence that in Europe, a greater predilection for market financing is associated with higher levels of power distance; as well as concentration in equity markets, control of corruption, efficiency of debt enforcement and the adoption of the euro. Lower predilection for equity financing over bank financing is associated with higher uncertainty avoidance, an English legal origin, and political legitimacy. As we discuss below, our results point to both cultural-transactions costs and political-influence determinants of choices for financing channels across Europe. These results should be of great interest for those interested in the relationship of culture, political economy, and financial intermediation. Similarly, this study may be useful in assessing the recent moves towards wider European unification.

Although economists have long noted that financing in some countries is market-based while in others it is predominantly bank-based, the cultural and other national determinants of why financing in European countries are bank-based or market-based has been largely ignored by the literature. Such knowledge would clearly be important to managers, policy makers, and scholars. This paper is an attempt to fill this important gap in the literature regarding the determinants of national financial architecture. This paper examines financing architecture choices between institutions and markets along with data on national characteristics for the recent eight year period, 1996–2006, that covers the adoption of the common currency, the Euro, from nineteen countries: Austria, Belgium, Czech Republic, Denmark, Finland, France, Germany, Hungary Ireland, Italy, Netherlands, Norway, Poland, Portugal, Russia, Spain, Sweden, Switzerland, and the UK. This paper documents robust evidence that a greater predilection for market financing is associated with higher levels of power distance, lower levels of uncertainty avoidance, higher concentration in equity markets, and the adoption of the euro. This paper also presents some evidence that higher control of corruption, efficiency of debt enforcement, ethnic fractionalization, and individualism may be positively, and an English legal origin and political legitimacy negatively, related to a predilection for financial markets. These results on the determinants of national financial architecture should be of great interest to managers of multinationals, policy makers, and scholars interested in the relationships between culture, political economy, and financial intermediation.