عنوان انگلیسی
Identifying the effects of a lender of last resort on financial markets: Lessons from the founding of the fed
دانلود فوری مقاله + سفارش ترجمه 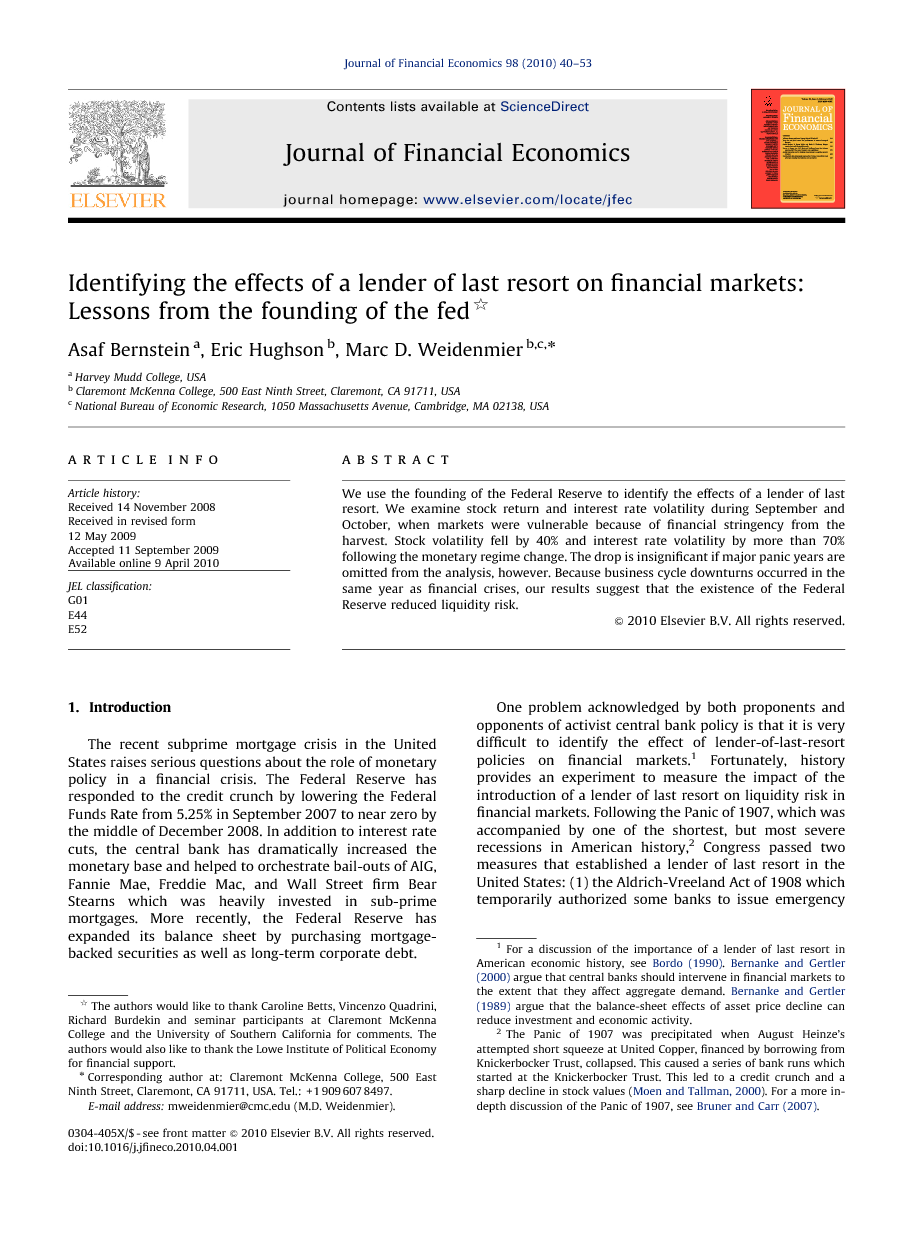 We use the founding of the Federal Reserve to identify the effects of a lender of last resort. We examine stock return and interest rate volatility during September and October, when markets were vulnerable because of financial stringency from the harvest. Stock volatility fell by 40% and interest rate volatility by more than 70% following the monetary regime change. The drop is insignificant if major panic years are omitted from the analysis, however. Because business cycle downturns occurred in the same year as financial crises, our results suggest that the existence of the Federal Reserve reduced liquidity risk.

The recent subprime mortgage crisis in the United States raises serious questions about the role of monetary policy in a financial crisis. The Federal Reserve has responded to the credit crunch by lowering the Federal Funds Rate from 5.25% in September 2007 to near zero by the middle of December 2008. In addition to interest rate cuts, the central bank has dramatically increased the monetary base and helped to orchestrate bail-outs of AIG, Fannie Mae, Freddie Mac, and Wall Street firm Bear Stearns which was heavily invested in sub-prime mortgages. More recently, the Federal Reserve has expanded its balance sheet by purchasing mortgage-backed securities as well as long-term corporate debt. One problem acknowledged by both proponents and opponents of activist central bank policy is that it is very difficult to identify the effect of lender-of-last-resort policies on financial markets.1 Fortunately, history provides an experiment to measure the impact of the introduction of a lender of last resort on liquidity risk in financial markets. Following the Panic of 1907, which was accompanied by one of the shortest, but most severe recessions in American history,2 Congress passed two measures that established a lender of last resort in the United States: (1) the Aldrich-Vreeland Act of 1908 which temporarily authorized some banks to issue emergency currency during a financial crisis and (2) the Federal Reserve Act of 1913 that established a public central bank. The legislation was designed to provide a “more elastic currency” (i.e., liquidity) that could meet the seasonal demands of economic activity caused by the agricultural cycle. Several of the most severe financial crises of the National Banking Period (1863–1913) including the panics of 1873, 1890, and 1907, occurred in the months of September and October because of financial stress associated with the costs of harvesting crops in the fall (Kemmerer, 1911 and Sprague, 1910).3 The seasonal nature of financial crises in the National Banking Period motivates the identification strategy we employ to isolate the effects of the lender-of-last-resort function on interest rates and stock returns from other macroeconomic shocks.4 We compare the standard deviation of stock returns across the months of September and October over the period 1870–May 1908 with the standard deviation of stock returns in those same months during the Aldrich-Vreeland (June 1908–1913) and Federal Reserve (1913–1925) periods. We examine the volatility of asset prices in September and October for three reasons: (1) financial market volatility generally increases prior to the onset of a recession (Schwert, 1989a), (2) the effects of the lender of last resort should have been largest in the fall harvest months when financial markets were often illiquid, and (3) given the absence of high-frequency and high-quality macroeconomic data during the National Banking Period, our identification approach should provide some insight into the chicken and egg problem: did financial crises have real effects or did real shocks cause financial crises (Barro, 2000 and Davis et al., 2007)? If the former is true, then financial market volatility should have significantly declined with the establishment of a lender of last resort that provided liquidity to financial markets. To answer this question, we analyze the impact of the founding of the Fed on the stock market. We employ Goetzmann, Ibbotson, and Peng's (2001) new comprehensive database of stock prices, hereafter GIP, from 1870 to 1925. The new stock price index significantly improves on the widely used Cowles Index by using month-end closing prices rather than the average of monthly highs and lows, thereby avoiding a significant autocorrelation problem in stock returns (Schwert, 1989b and Working, 1960). An analysis of the GIP Index shows that stock volatility in September and October declined more than 40% following the passage of the Aldrich-Vreeland Act. Although we find that stock volatility in September and October was significantly greater than the other 10 months of the year prior to the passage of Aldrich-Vreeland, this was not true following the monetary regime change.5 The results are robust to a wide variety of specification tests with the exception that the result does not hold if we use the Cowles Index for the empirical analysis. 6 However, we do not find a statistically significant drop in financial market volatility if the major panic years are dropped from the empirical analysis. 7 We also examine short-term interest rate volatility in the months of September and October before and after the monetary regime change. The volatility of the call loan rate declined by more than 70% in the months of September and October following the passage of Aldrich-Vreeland. The analysis also shows that the reduction in interest rate volatility can be attributed to a decrease in the standard deviation of the call loan rate, not to a decline in the level and seasonality of interest rates. As with stock returns, we do not find a statistically significant drop in interest rate volatility if the major panic years are dropped from the analysis. Given that the largest financial panics were preceded by the onset of an economic recession, this suggests that the primary effect of the creation of the Federal Reserve was to dramatically reduce liquidity risk in years when there was a business cycle turning point and a financial crisis. We begin the analysis with a brief history of the National Banking Period prior to World War I. We then discuss the new database on stock prices in the pre-CRSP era. This is followed by an empirical analysis of stock and interest rate volatility. We conclude with a discussion of the implications of our results for future studies in financial economics and the role of monetary policy during a financial crisis.

Can a lender of last resort reduce liquidity risk in financial markets? This question has recently received considerable attention since the implied stock volatility for many broad market US indexes has more than doubled since the onset of the subprime mortgage crisis in 2007. The large rise in stock volatility and concomitant economic downturn may be the most severe since the Great Depression. We provide a historical perspective on this question by examining the effects of one the most important monetary regime changes in American history—the Aldrich-Vreeland Act in 1908 and the creation of the Federal Reserve in 1913—on stock and interest rate volatility. We introduce a new identification strategy to isolate the effect of the introduction of a lender of last resort on American financial markets from other macroeconomic shocks such as World War I, the shutdown of American financial markets from July to December 1914, and the abandonment of the gold standard. Our identifying strategy is motivated by the observation that many of the largest financial crises of the National Banking Period occurred in the months of September and October when the money and short-term credit markets were relatively illiquid because of the harvest season. We exploit the seasonal variation in equity and credit markets to identify the effect of the Aldrich-Vreeland Act and the creation of the Federal Reserve on financial market volatility. Using Goetzmann, Ibbotson, and Peng's (2001) new comprehensive pre-CRSP database, we find that the monetary regime change was associated with a dramatic reduction in financial market volatility. Stock volatility in the months of September and October declined nearly 50% in the Aldrich-Vreeland and Federal Reserve period. Interest-rate volatility declined more than 70% in September and October following the monetary regime change. Although we find that financial market volatility in September and October was significantly higher in the pre-Aldrich-Vreeland period than the other 10 months in the year, this was not the case after the introduction of a lender of last resort. In addition, we also do not find that financial market volatility declined if the major panic years are dropped from the empirical analysis. Given that recessions were coincident with major panics, the results provide strong evidence that the primary effect of the creation of the Federal Reserve was to reduce liquidity risk in financial markets in years where there was a business cycle turning point and a financial crisis. The analysis also provides some evidence on the economic effects of a lender of last resort. The poor quality of high-frequency macroeconomic indicators such as GDP, investment spending, and industrial production before World War II has previously made it difficult to assess the effect of the policy changes on the US economy, although Schwert (1990) finds that during the period 1889–1925, lagged stock returns do forecast the current level of real activity. Another problem is that it is difficult to analyze the linkages between the financial and real sectors given that credit and equity markets are forward looking and economic data are not. By examining financial market volatility, we gain some insight into the effects of the introduction of a lender of last resort given that stock volatility is a leading indicator of future investment spending and economic activity. We interpret our results as evidence that the introduction of a lender of last resort significantly reduced the probability of a financial crisis and its potentially negative effects on economic activity, especially in the fall harvest months. Our results have several implications for future studies of financial markets as well as monetary policy in a time of crisis. First, the findings highlight the potential problems in using the Cowles Index to test hypotheses in financial economics. Future research in financial economics may want to revisit the findings of previous studies that have relied on the Cowles Index to study the behavior of stock returns or stock volatility over a long period of time. Second, from the perspective of policymakers, liquidity assistance from a lender of last resort can be very important in preventing a larger meltdown in financial markets that can have real economic effects.