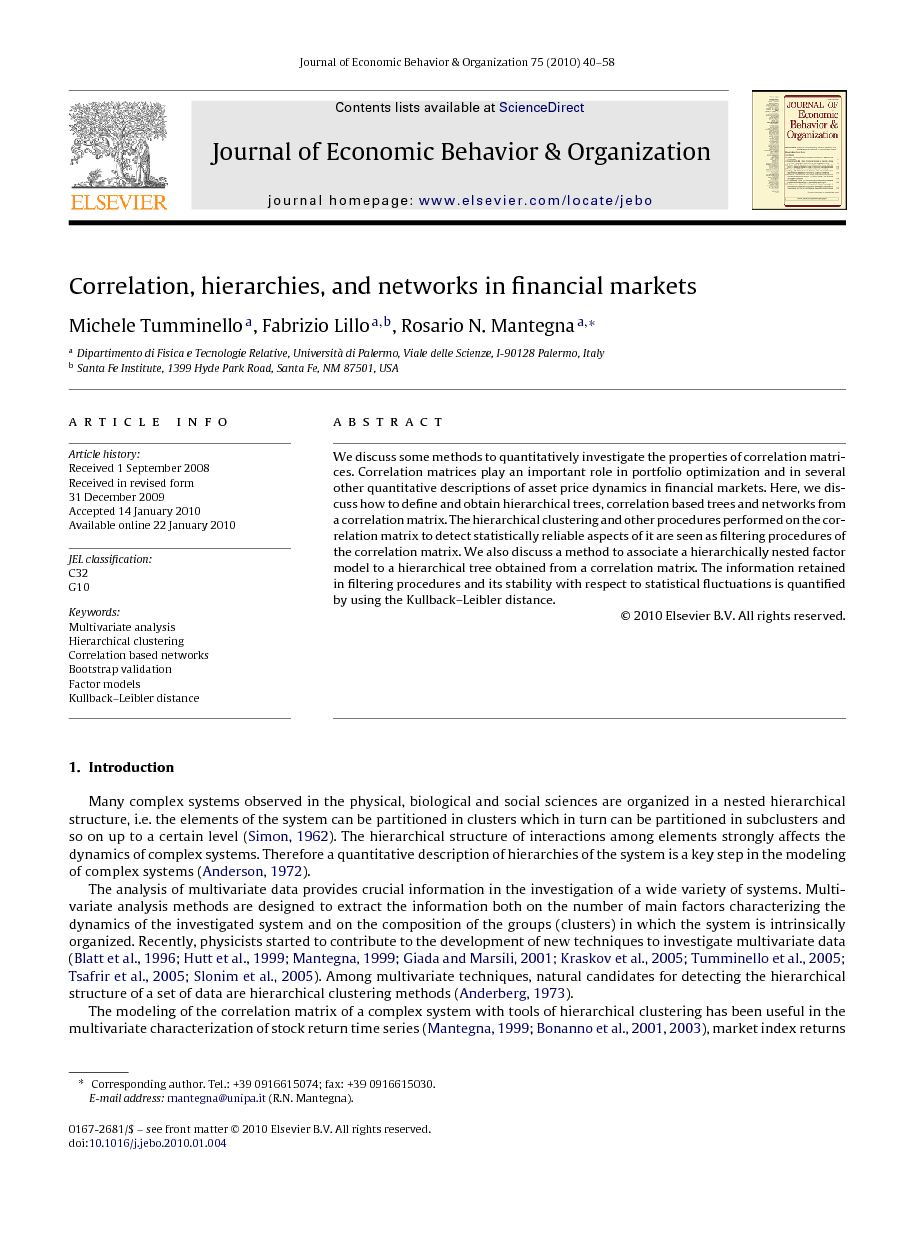 This paper discusses several methods to quantitatively investigate the properties of the correlation matrix of a system of N elements. In the present work, we consistently investigate the correlation matrix of the synchronous dynamics of the returns of a portfolio of financial assets. However, our results apply to any correlation matrix computed starting from the series of T records belonging to N elements of a system of interest. Specifically, we discuss how to associate to a correlation matrix a hierarchical tree and correlation based trees or graphs. In previous papers, we have shown that the information selected through these clustering procedures and the construction of correlation based trees or graphs are pointing out interesting details on the investigated system. For example, the hierarchical clustering is able to detect clusters of stocks belonging to the same sectors or sub-sectors of activities without the need of any supervision of the clustering procedure. We have also shown that the information present in correlation based trees and graphs provides additional clues about the interrelations among stocks of different economic sectors and sub-sectors. It is worth noting that this kind of information is not present in the information stored in the hierarchical trees obtained by ALCA and SLCA clustering procedures or, equivalently, in the associated ultrametric correlation matrices. The information obtained from what we call the “filtering procedure” of the correlation matrix is subjected to statistical uncertainty. For this reason, we discuss a bootstrap methodology able to quantify the statistical robustness of both the hierarchical trees and correlation based trees or graphs. The hierarchical trees and correlation based trees and graphs associated with portfolios of stocks traded in financial markets often show clusters of stocks partitioned in sub-clusters, sub-clusters partitioned in sub-sub-clusters and so on until the level of the single stock. The ubiquity of this observation has motivated us to develop a hierarchically nested factor model able to fully describe this property. Our model is a nested factor model characterized by the same correlation matrix as the empirical set of data. The model is expressed in a direct and simple form when all the correlation coefficients are positive or very close to positive (for a precise definition of the limits of validity of this extension see Section 3). The number of factors of the model is by construction equal to the number of elements of the system. Again, the selection of the most statistically reliable factors detected in a real system is obtained by a procedure based on bootstrap with a bootstrap threshold selected in a self-consistent way. The amount of information and the statistical stability of filtering procedures of the correlation matrix are quantified by using the Kullback–Leibler distance. We report and discuss analytical results both for Gaussian and for Student’s t-distributed multivariate time series. In both cases the expectation values of the Kullback–Leibler distance are model independent, indicating that this distance is a good estimator of the statistical uncertainty due to the finite size of the empirical sample. These properties are not observed in other widespread distances between matrices such as, for example, the Frobenius distance, which is a standard measure of the distance between matrices. In our example with real data, we estimate the amount of information retained and the stability of the filtering procedure used in a data set of 100 stocks approximately described by a multivariate Student’s t-distribution. For this set of data, we are able to discriminate among filtering procedures as different as ALCA, SLCA, random matrix theory and a shrinkage procedure.