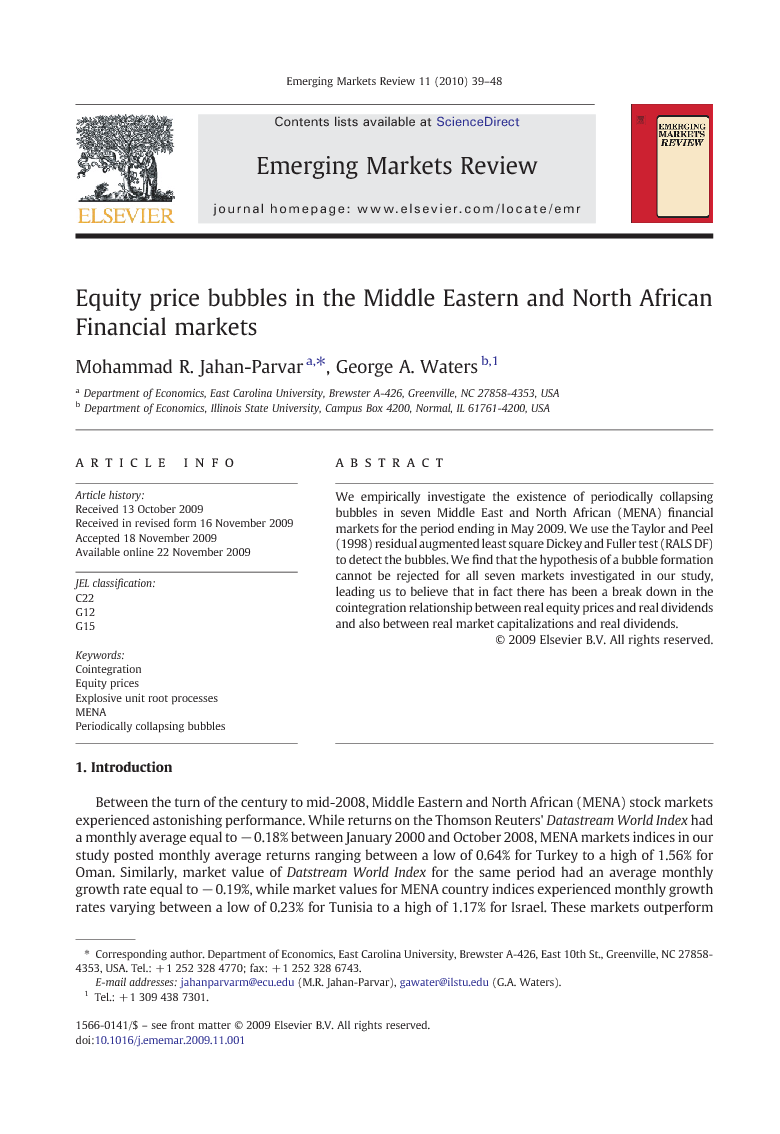 We empirically investigate the existence of periodically collapsing bubbles in seven Middle East and North African (MENA) financial markets for the period ending in May 2009. We use the Taylor and Peel (1998) residual augmented least square Dickey and Fuller test (RALS DF) to detect the bubbles. We find that the hypothesis of a bubble formation cannot be rejected for all seven markets investigated in our study, leading us to believe that in fact there has been a break down in the cointegration relationship between real equity prices and real dividends and also between real market capitalizations and real dividends.

Between the turn of the century to mid-2008, Middle Eastern and North African (MENA) stock markets experienced astonishing performance. While returns on the Thomson Reuters' Datastream World Index had a monthly average equal to − 0.18% between January 2000 and October 2008, MENA markets indices in our study posted monthly average returns ranging between a low of 0.64% for Turkey to a high of 1.56% for Oman. Similarly, market value of Datstream World Index for the same period had an average monthly growth rate equal to − 0.19%, while market values for MENA country indices experienced monthly growth rates varying between a low of 0.23% for Tunisia to a high of 1.17% for Israel. These markets outperform world market indices by a larger margin if we focus on 2001–2007 period. Whether the behavior of these indices represents a bubble or is indicative of the expected future performance of fundamentals is an open question. In this paper, we formally address this question and test for formation of speculative bubbles in seven MENA equity markets in the period ending in May 2009. We present both statistical and descriptive evidence in support of our assertion that a speculative bubble formed in MENA equity markets studied in this paper. The importance of the issue of the proper policy response to asset bubbles has been highlighted by the recent financial crisis. Chan et al. (2003) believe that in absence of rational bubbles, monitoring the market fundamentals in conducting monetary policy is sufficient. Otherwise, to divert expectations from the bubble path, positive policy action is needed. However, targeting financial bubbles as a reasonable policy for central banks is controversial.2 In part, this controversy stems from the difficulty of detecting bubbles. This is what we have done for seven MENA equity markets. While bursting of financial bubbles in emerging and frontier markets may have a smaller global impact than the subprime crisis in the US, Asian financial crisis and Russian default episodes in the late 1990s warn us not to dismiss emerging markets in a globalized financial system. In particular, Parke and Waters (2007) demonstrate that the uncertainty about fundamentals is a major contributing factor to the formation of bubbles. Such uncertainty would tend to be present in maturing asset markets such as the MENA stock markets. Hypothetically, it is possible to detect formation of bubbles by monitoring deviations from the “correct” price, based on fundamentals. One way of obtaining fundamentals-based prices is to use CAPM-type pricing models, and then compare the market outcomes and the model predictions, using a suitable measure for divergence. In the context of international markets, such an approach requires significant conditional correlations between the local and world index returns. One particular problem with the majority of MENA markets is weak correlations between MENA and world index returns. Cheng et al. (forthcoming) provide detailed documentation of asset pricing characteristics of nine MENA markets in CAPM setting (static, constant parameter intertemporal, and Markov switching variants), but do not study the possibility of bubble formation. They conclude that there is very strong evidence of segmentation in MENA markets from international financial system except for Israel, Turkey, and to a lesser extent, Bahrain. They confirm and document weak conditional correlations between MENA and world index returns.3 A crucial issue from our point of view is that Cheng et al., (forthcoming) findings suggest that since MENA markets are segmented from the world financial system, we cannot use international CAPM or its extensions to price returns from these markets. The majority of the MENA markets seem to price assets based on local information alone, as in Merton (1973). Hence, we cannot detect formation of bubbles based on CAPM-based pricing. Thus, formal testing for bubbles is required. We introduce formal cointegration tests between price and dividends to detect equity price bubbles in seven MENA financial markets. Diba and Grossman (1988) argue that if bubbles are not present, prices and dividends should be cointegrated. Evans (1991) constructs a class of periodically collapsing bubbles that may not be detected by simple cointegration tests. Taylor and Peel (1998) introduce a test for cointegration that is robust to the skewness and excess kurtosis, and, hence, is able to detect such bubbles. Our conclusion is based on results from both types of tests. In general, there are not many studies focused on MENA financial markets. In addition to Cheng et al. (forthcoming) discussed earlier, we briefly review some recent examples. Errunza (2001) focuses on the liberalization and integration of financial markets in Egypt, Israel, Jordan, Morocco, and Turkey. Ghysels and Cherkaoui (2003) study trading costs in Morocco. Lagoarde-Segot and Lucey (2008) study information efficiency in seven MENA markets and find heterogeneous levels of efficiency. Billmeier and Massa (2009) study the role of oil reserves, remittances, and institutions besides the traditional factors, and find that they appear to play a role in determination of market capitalization in MENA and Central Asian financial markets. Alsubaie and Najand (2009) investigate the informational role of trading volume in predicting the direction of short-term returns for the Saudi Stock Exchange. Still fewer studies investigate the possibility of bubble formation in MENA markets. In a paper related to our work, Billmeier and Massa (2008) study the possibility of non-cointegration between Egyptian stock market index and the underlying fundamentals. They find that this possibility cannot be ruled out. Their work is focused on a single market. We, on the other hand, study a more diverse set of markets and are formally looking for evidence in favor of bubble formation. We are not aware of any other recently published paper on MENA equity markets that directly addresses speculative bubbles. The rest of the article proceeds as follows. In Section 2 we briefly discuss the models used in detection of asset price bubbles, review the Taylor and Peel (1998) methodology, and discuss the estimation equations and variables. In Section 3 we introduce the data. Section 4 contains presentation and discussion of our main empirical findings. Section 5 concludes.

In this paper, we formally address an open question in emerging markets finance literature. We investigate whether rationally collapsing bubbles can be viewed as an explanatory factor for the unusually bullish performance of the MENA financial markets in the period ending in the first decade of the 21st century. We conclude that based on our statistical findings and descriptive evidence presented, such a hypothesis cannot be ruled out. We believe that based on the work of Cheng et al. (forthcoming), it is hard or even impossible to assess the performance of MENA markets based on their static or dynamic relationship with composite world financial market price indices, since these markets are generally segmented from the global financial system. Hence, detection of statistically significant divergences from CAPM-based return predictions is hard. As a result, we believe that to evaluate the performance of these markets, formal testing for rationally collapsing bubbles is needed. We carry out this task by following the methodology of both Diba and Grossman (1988) and Taylor and Peel (1998). Based on Diba and Grossman methodology, four out of the seven MENA financial markets studied have price series which seem to be cointegrated with dividend series. The hypothesis of the absence of a rational bubble cannot be rejected except for Tunisia, and to a lesser extent for Lebanon and Morocco. Since Evans (1991) shows that conventional cointegration methodology fails in the face of periodically collapsing bubbles, we also test for this class of bubbles. Using Taylor and Peel (1998) methodology to test for periodically collapsing bubbles, we find that the null hypothesis of non-cointegration between prices and dividends, which is evidence of a bubble, cannot be rejected at any reasonable statistical level for all markets in our sample. Along with the descriptive evidence of market performance since October 2008, we find this outcome to be supportive of bubbles in MENA financial markets. Our results are of interest to financial scholars conducting research on emerging and frontier markets, investors seeking global opportunities, and international and national policy makers with an interest in detection or taking action against financial bubbles. The dramatic collapse of stock markets in many Western economies in 2008, particularly in the U.S., have led to serious consequences for the world economy in 2008–09 period. These events highlight the need for testing the vulnerability to bubble formation in any asset market that is integrated with the broader economy. Our results demonstrate that MENA stock markets are not immune to such concerns. Our findings are ex post in nature and pertain to markets with relatively short trading histories. But we believe that given the political and economic sensitivity of the MENA region, it is very important to monitor for the formation of financial asset bubbles in these countries in order to avoid potential political or economic instability which may spill over to other markets, either via financial or economic contagion, or through political unrest and conflict.