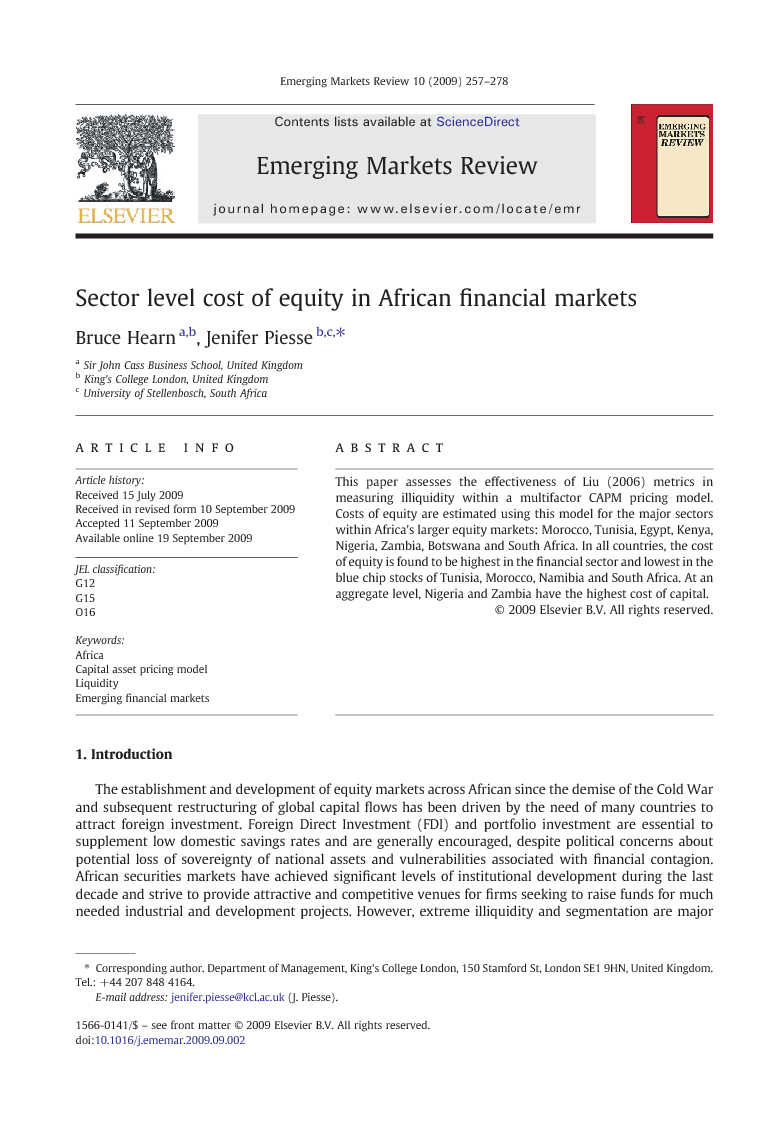 This paper assesses the effectiveness of Liu (2006) metrics in measuring illiquidity within a multifactor CAPM pricing model. Costs of equity are estimated using this model for the major sectors within Africa's larger equity markets: Morocco, Tunisia, Egypt, Kenya, Nigeria, Zambia, Botswana and South Africa. In all countries, the cost of equity is found to be highest in the financial sector and lowest in the blue chip stocks of Tunisia, Morocco, Namibia and South Africa. At an aggregate level, Nigeria and Zambia have the highest cost of capital.

This study proposes a size and liquidity augmented capital asset pricing model to explain the cross section of expected returns in emerging markets and is the first such study on a sample of African markets. The sample includes Morocco, Tunisia and Egypt in North Africa, Kenya, Botswana, Nigeria and Zambia in sub-Saharan Africa plus Namibia and South Africa. There are considerable differences between markets in terms of corporate governance and regulation with the most developed regimes being those in the North Africa group and in South Africa. Illiquidity series were constructed on a time series cross-section basis and augment the Fama and French (1993) risk-adjusted CAPM. This model is then used to calculate cost of equity estimates on samples that include top tier stocks, industrial sectors and the aggregate markets for these countries. This study presents substantial evidence regarding the importance of firm size and liquidity in pricing state variables. Considerable improvements are made in explaining the cross section of stock returns by including the size and liquidity factors, which is of particular importance in emerging markets where illiquidity is a common issue. The evidence suggests that costs of equity for the aggregate markets are highest in Nigeria and Zambia but lower in South Africa and Egypt and lower still in Kenya and Botswana. The lowest costs of equity are in markets in Namibia, Tunisia and Morocco. The greatest difference in costs of equity between the top tier blue chip stocks and the aggregate markets in Botswana and South Africa although there are smaller differentials in Nigeria and Zambia. This illustrates the significant segmentation present within markets between the top level blue chip stocks, which can access international capital markets and commonly adhere to the highest levels of corporate governance, and the aggregate market. Equally, the frequently high costs of equity of the various national financial sectors in the sample demonstrate that this industry is not necessarily the best from which exchanges can actively seek to attract new listings. This evidence also lends further support to the benefits of effectively enforced regulation and corporate governance regimes where the markets of Namibia, South Africa, Tunisia and Morocco have the lowest costs of equity and the highest levels of regulation and market transparency. It is clear that firms raising external finance through the stock market in these countries are at a distinct advantage compared to those in Nigeria and Zambia where the very high costs of equity inhibit industrial expansion and make otherwise profitable projects unviable.