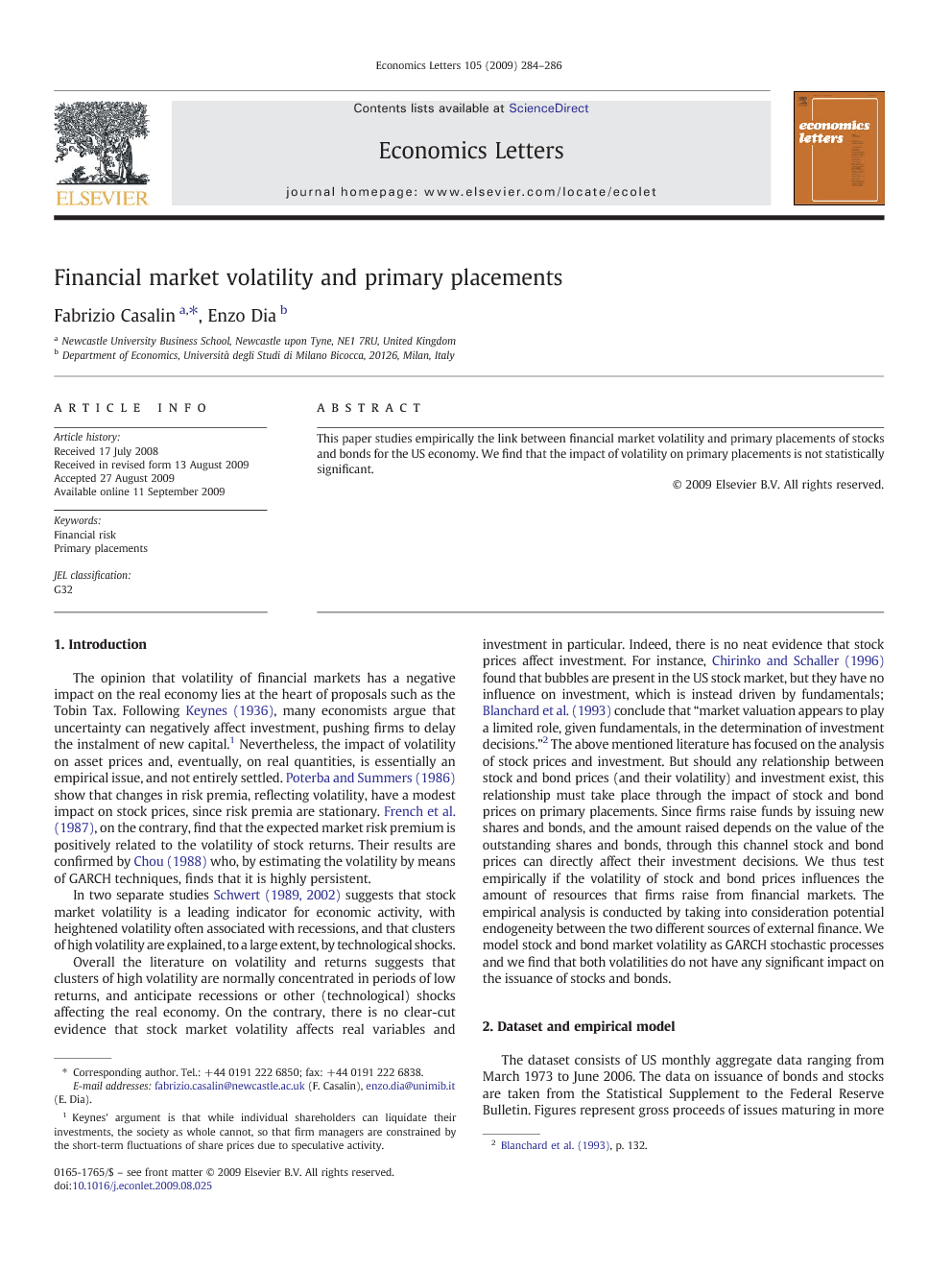 The opinion that volatility of financial markets has a negative impact on the real economy lies at the heart of proposals such as the Tobin Tax. Following Keynes (1936), many economists argue that uncertainty can negatively affect investment, pushing firms to delay the instalment of new capital.1 Nevertheless, the impact of volatility on asset prices and, eventually, on real quantities, is essentially an empirical issue, and not entirely settled. Poterba and Summers (1986) show that changes in risk premia, reflecting volatility, have a modest impact on stock prices, since risk premia are stationary. French et al. (1987), on the contrary, find that the expected market risk premium is positively related to the volatility of stock returns. Their results are confirmed by Chou (1988) who, by estimating the volatility by means of GARCH techniques, finds that it is highly persistent. In two separate studies Schwert, 1989 and Schwert, 2002 suggests that stock market volatility is a leading indicator for economic activity, with heightened volatility often associated with recessions, and that clusters of high volatility are explained, to a large extent, by technological shocks. Overall the literature on volatility and returns suggests that clusters of high volatility are normally concentrated in periods of low returns, and anticipate recessions or other (technological) shocks affecting the real economy. On the contrary, there is no clear-cut evidence that stock market volatility affects real variables and investment in particular. Indeed, there is no neat evidence that stock prices affect investment. For instance, Chirinko and Schaller (1996) found that bubbles are present in the US stock market, but they have no influence on investment, which is instead driven by fundamentals; Blanchard et al. (1993) conclude that “market valuation appears to play a limited role, given fundamentals, in the determination of investment decisions.”2 The above mentioned literature has focused on the analysis of stock prices and investment. But should any relationship between stock and bond prices (and their volatility) and investment exist, this relationship must take place through the impact of stock and bond prices on primary placements. Since firms raise funds by issuing new shares and bonds, and the amount raised depends on the value of the outstanding shares and bonds, through this channel stock and bond prices can directly affect their investment decisions. We thus test empirically if the volatility of stock and bond prices influences the amount of resources that firms raise from financial markets. The empirical analysis is conducted by taking into consideration potential endogeneity between the two different sources of external finance. We model stock and bond market volatility as GARCH stochastic processes and we find that both volatilities do not have any significant impact on the issuance of stocks and bonds.