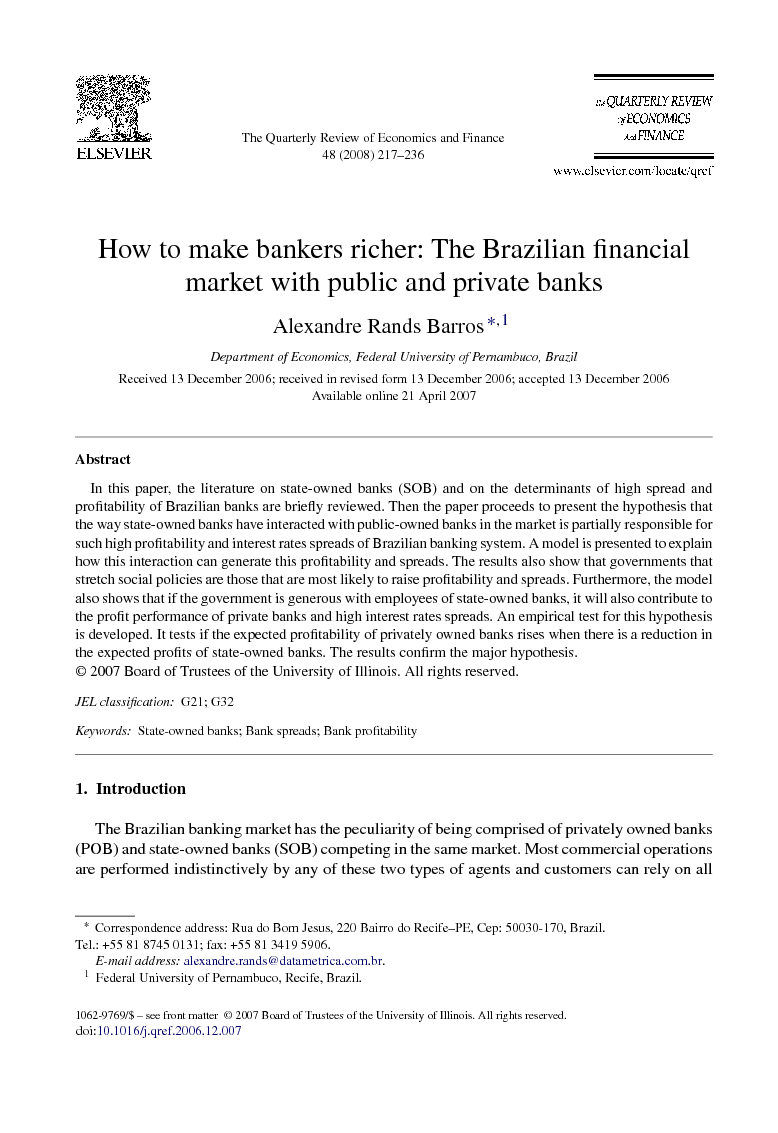 The Brazilian banking market has the peculiarity of being comprised of privately owned banks (POB) and state-owned banks (SOB) competing in the same market. Most commercial operations are performed indistinctively by any of these two types of agents and customers can rely on all of them to obtain most of their regular banking services. In December 2003, state-owned banks were responsible for 42.43% of total deposits, and they had 37.23% of total assets of all banks in Brazil. They were also responsible for 32.73% of total credit to companies and consumers.2 The largest Brazilian bank, Banco do Brasil, is a state-owned bank. These data indicate that the state-owned banks’ stake of the market is not marginal. Many countries also have SOB,3 as there was a widespread idea among economists that there were several market failures in the banking sector, so that public ownership of banks could improve social welfare.4 The major market failures presented are (i) intrinsic potential instability5; (ii) asymmetric and costly information; (iii) the existence of social externalities emerging from private investments; and (iv) individual minimum scale demand for access to financial services, what tends to exclude poor and isolated populations from such market.6 SOBs in Brazil are actually state-controlled banks, as they are all companies whose shares can be freely negotiated in the market.7 Nevertheless, governments are the major shareholders. This assures them control on the banks’ governance and helps them rely on these banks to obtain most of their banking services, as they do not have to go through public competitions for their acquisition. Brazilian legislation that regulates governmental purchases allows the public sector to buy goods and services directly from these state-controlled companies, without having to engage in a public competition. The Federal Government controls the five major state-owned banks.8 Brazilian private banks are among the most profitable in the world. Particularly, their profitability is high when compared to other sectors. Some bank shareholders have created companies that work parallel to the banks, providing services to their own controlled banks, so that they can disguise part of their profits.9 Brazilian banks also have one of the highest interest rate spreads in the world.10 The level of these spreads has raised many social concerns, as it has reduced the share of credit to total GDP, and consequently, harmed local development.11 Very often, the profitability of banks and the interest rates spreads are considered to be part of the same phenomenon, although this is not necessarily true. The good performance of banks has been attributed to a number of factors. First, there is the oligopolistic structure of the banking market.12 Second, the excessive financial risk of operating in Brazil is also identified as a major source of such extraordinary profits.13 The first argument has always faced some difficulties to explain how state-owned banks share the same practice of private agents in the oligopoly and do not force banking spreads and tariffs to fall through competition.14 Very often, this apparent contradiction has been presented as a strong argument that government authorities work under excessive influence of private bankers. Various other explanations for the high interest rates have been given. One is the high tax burden on financial activities (see Cardoso & Koyama, 2000; Brazilian Central Bank, 1999 and Brazilian Central Bank, 2003). Another points to the market power of banks and inefficiency (Belaisch, 2003), although some studies have investigated this hypothesis, but have not found correlation between interest rates and concentration in the banking industry (see Tonooka & Kayama, 2003). The idea that banks work under high risk as a consequence of macroeconomic instability is also pointed out as a cause for high spreads (see Tonooka & Kayama, 2003). A high default on banks credits is also pointed as a source of high spreads on interest rates (Cardoso & Koyama, 2000; Brazilian Central Bank, 1999 and Brazilian Central Bank, 2003). It is worth noting that many of these arguments could explain the high spread even if profitability of the banks was low, as they generate low efficiency level of banks. This paper argues that the way SOBs have interacted with POBs in the market is partially responsible for high profitability and interest rates spreads. We also show that governments that stress social policies are those that are most likely to raise profitability and spreads. Furthermore, we develop a model that also shows that if the government is generous with employees of SOBs, it will also contribute to the profit performance of private banks and high interest rates spreads.