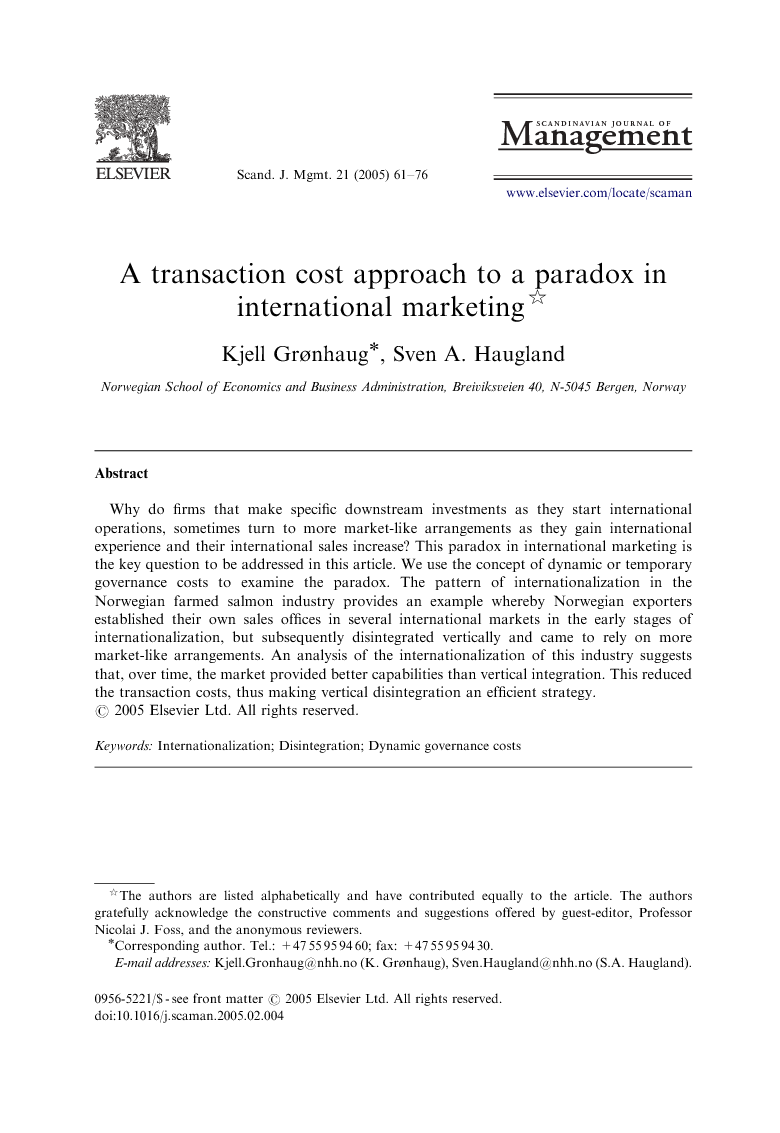 The purpose of this article has been to explain an apparent paradox in international marketing. The traditional view of the internationalization process as portrayed in the international marketing literature, is that firms can be expected to become gradually more involved in downstream activities in foreign markets as firms and the industry both become more international. However, contrary to the prediction in Proposition 1, Norwegian exporters established sales offices and sales representatives in several foreign markets in the early stages of internationalization and, as time passed, they disintegrated despite rising sales and a growing dependence on foreign markets. Our analysis showed that the farmed salmon industry was characterized by high levels of market and technical uncertainty in the early stages. Downstream investments were undertaken in these early stages in order to learn about and to educate the market. These investments can be explained mainly in terms of buyers’ lack of knowledge. As the industry developed, the various uncertainties were mitigated and the local actors learnt to appreciate, evaluate and use the product, so that it became easier to conduct transactions with them. The gradual build-up of knowledge among customers can explain the move towards the market-mode of organizing international transactions as predicted in Proposition 2. Greater knowledge and less uncertainty also correspond with the claim made by Langlois that ‘‘when the market provides the right capabilities there is no need for vertical integration because governance costs are reduced substantially’’ (1997). Vertical integration is considered to be an appropriate safeguard against concern about hold-ups and opportunistic behavior. This applies particularly in smallnumber markets for transactions requiring specific investments. However, in the international farmed salmon industry, both buyers and sellers are numerous, and the product is a non-durable good easy to evaluate. Hold-up problems are here of less importance. Furthermore, the transparency in the market and the modest switching and adjustment costs make concern about opportunistic behavior less acute. However, concern about opportunistic behavior can be observed among sellers when dealing with new buyers in recently opened markets, for example by charging guarantees for payment prior to delivery (e.g., Grønhaug, 1996). Many of the empirical studies underlying the internationalization process model have been conducted in small-number markets that offer heterogeneous and complex products requiring specific investments (e.g., Johanson & Wiedersheim-Paul, 1975). Thus, it is possible that the model is biased, as it may be influenced by the specific firms and industries studied. Our analysis also reveals that the boundaries of the firm depend in part on the relative strength of the firm’s capabilities versus the market’s capabilities. If other actors are able to perform specific activities in a more efficient way, then internalizing the activities will not benefit the focal firm. This will also apply when firms have been heavily involved in international markets over a long period of time. The combination of TCE and the RBV, particularly the link between capabilities and transaction costs showing the temporary nature of transaction costs, seems to throw further light on the question of firm boundaries. As regards managerial implications, our study indicates that there are many ways of becoming an international company and of organizing international activities, and that there is no one-to-one relationship between a company’s degree of internationalization and the level of its investments in foreign markets. Managers need to recognize that specific international activities which may be conducted most efficiently in local markets during one period, may be carried out more efficiently from the home market during another period. Mangers should thus carefully evaluate the different options available for organizing their international activities. In evaluating different options, particular attention should be paid to the firm’s own capabilities and to what existing companies in the local markets are good at. A comparison between firm capabilities and market capabilities may be a useful tool for determining how international activities should be organized. In this article we have advanced two competing propositions. The first was based on the internationalization literature, while the second was based on a combination of TCE and the RBV. As noted above, our second proposition yields both explanatory and predictive power, suggesting that this combination of theories may be useful in broadening our knowledge about the complex phenomenon of internationalization. In order to develop a better understanding of the internationalization processes, future research should be based on explicit theories allowing us to identify the drivers of the processes, firm boundaries and changes over time. Future efforts should also include empirical studies in several industries. Key industry characteristics should be explicitly taken into account, so that the descriptive and predictive validity of the theories and the explanations, as well as their limits, can be adequately examined. One timely question to be raised is whether we actually need a specific theory or theories of internationalization. Future empirical studies should use common and accepted theories to a larger extent, and apply the theories on various international settings. In this way international factors can be explicitly taken into account, the specific features of international business may be focused more clearly, and our understanding of the importance and specific effects of international dimensions can be compared to other theoretical explanations.