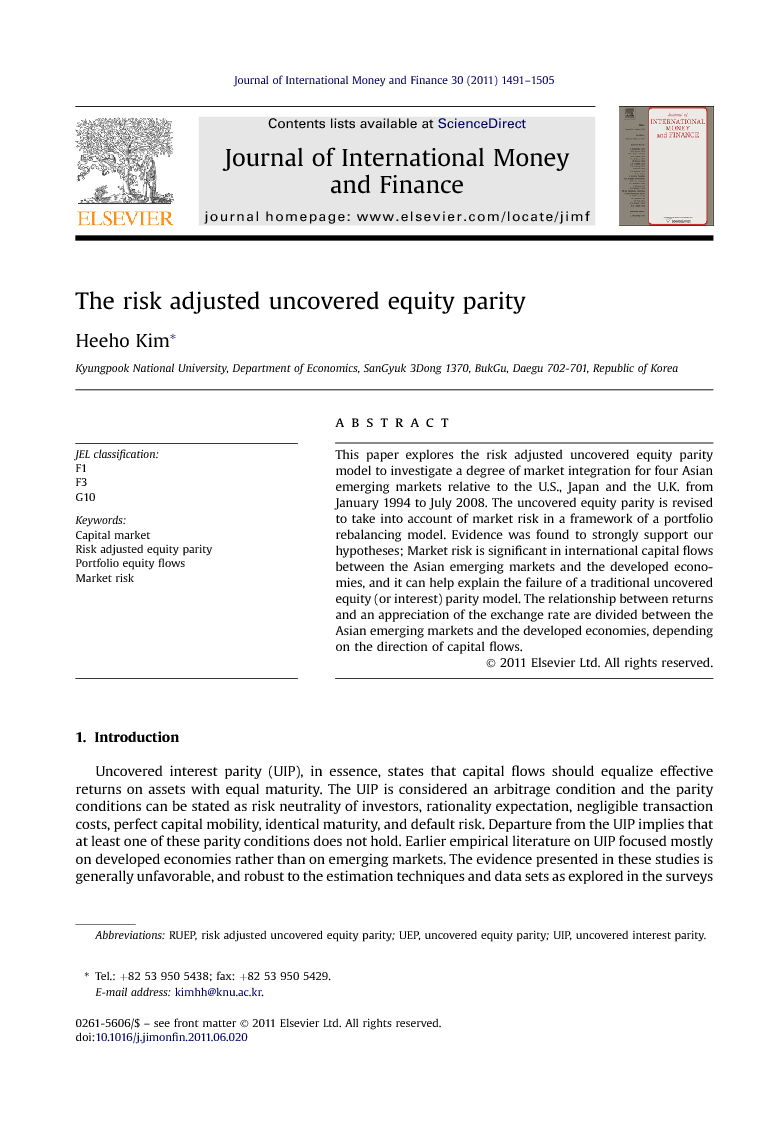 This paper explores the risk adjusted uncovered equity parity model to investigate a degree of market integration for four Asian emerging markets relative to the U.S., Japan and the U.K. from January 1994 to July 2008. The uncovered equity parity is revised to take into account of market risk in a framework of a portfolio rebalancing model. Evidence was found to strongly support our hypotheses; Market risk is significant in international capital flows between the Asian emerging markets and the developed economies, and it can help explain the failure of a traditional uncovered equity (or interest) parity model. The relationship between returns and an appreciation of the exchange rate are divided between the Asian emerging markets and the developed economies, depending on the direction of capital flows.

This paper explores a risk adjusted equity parity model to investigate the degree of market integration for the four Asian emerging markets relative to the U.S., Japan, and the U.K. from January 1994 to July 2008. These countries were Singapore, Korea, Malaysia, and Thailand, of which the capital markets were vulnerable to external market risks and experienced a currency crisis from 1997 to 2001 and a recent financial crisis in 2008. Inferences were focused on the tests of the risk adjusted equity parity model derived from the perspective of the portfolio model, which considers the market risk for international capital flows. In particular, this study examined how the degree of integration of the Asian capital market evolved over time, especially after the structural changes in the Asian capital markets since 2001. Using the monthly data of the sample economies, three main contributions to the literature on the tests of the uncovered equity (or interest) parity were found and are as following: Significant market risk exists in the Asian emerging markets and the existence of market risk could explain the failure of the uncovered equity (interest) parity for the Asian emerging markets and the other sample countries. The Asian capital markets became more integrated with the U.S. and Japan since 2001. It seems that capital flows to developed markets have mainly been for portfolio purposes while capital flows to the Asian markets having the arbitrage purposes. The effects of the return differentials and market risk are divided between the Asian markets and the developed economies, depending on the direction of capital flows. Inferring from the evidence, there should have been some biased restrictions toward capital outflows by the governments of the Asian countries. Even after the recent development and reform of the Asian capital markets, capital controls still remain in place to ensure adequate availability of external funding and to maintain the stability of the Asian currency exchange rates. In view of the lack of research focused on how these policy changes have affected the degree of integration and the risk of the Asian capital markets, this study has meaningful implications for academia as well as practical applications. It provides a unique measurement of the market risk and it can provide guidance in the formulation of effective policy toward market integration. The degree of market integration could be improved by the monetary authorities’ reaction to exchange movements and the sterilization of capital flows. In particular, ceteris paribus, capital flows tend to put a downward pressure on domestic return and hence on deviations from the uncovered equity parity conditions, when the central bank does not completely sterilize these inflows. Therefore, deviations from the uncovered equity parity conditions might be persistent due to monetary sterilization despite large and persistent capital inflows.