عنوان انگلیسی
International financial integration through the law of one price: The role of liquidity and capital controls
دانلود فوری مقاله + سفارش ترجمه 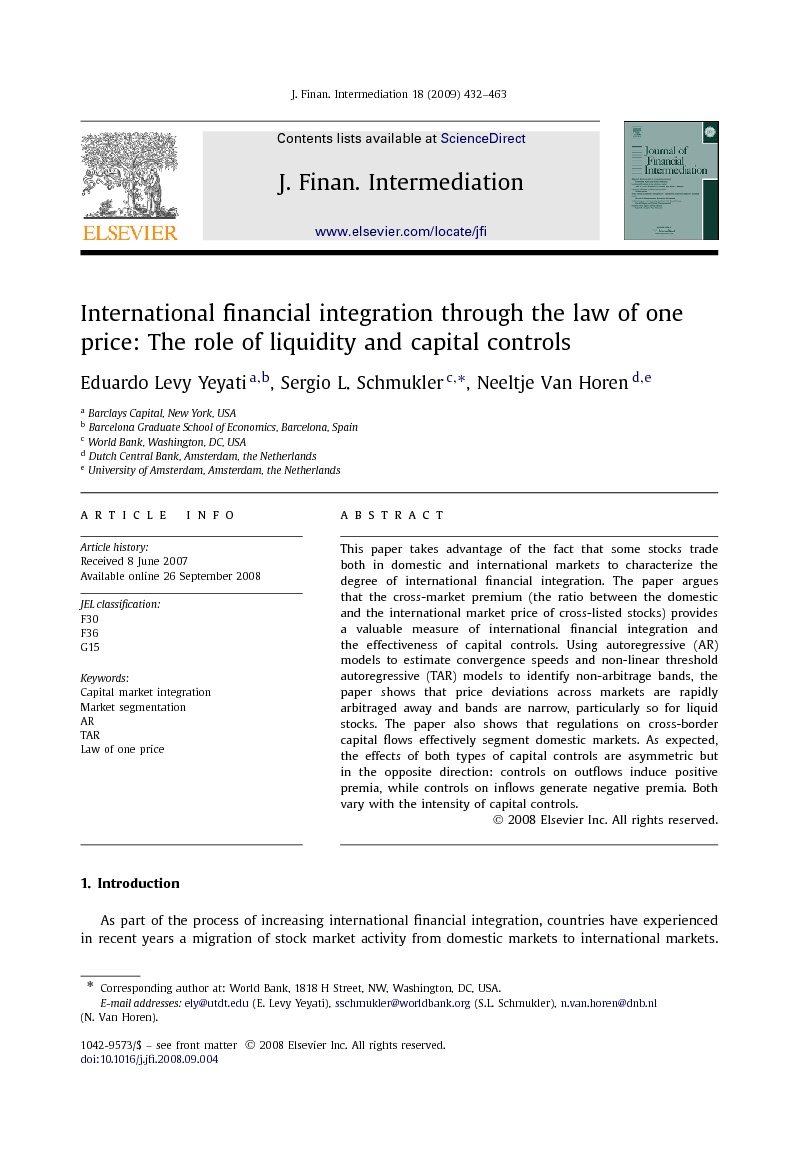 This paper takes advantage of the fact that some stocks trade both in domestic and international markets to characterize the degree of international financial integration. The paper argues that the cross-market premium (the ratio between the domestic and the international market price of cross-listed stocks) provides a valuable measure of international financial integration and the effectiveness of capital controls. Using autoregressive (AR) models to estimate convergence speeds and non-linear threshold autoregressive (TAR) models to identify non-arbitrage bands, the paper shows that price deviations across markets are rapidly arbitraged away and bands are narrow, particularly so for liquid stocks. The paper also shows that regulations on cross-border capital flows effectively segment domestic markets. As expected, the effects of both types of capital controls are asymmetric but in the opposite direction: controls on outflows induce positive premia, while controls on inflows generate negative premia. Both vary with the intensity of capital controls.

This paper exploited the fact that firms from emerging economies simultaneously trade their stocks in domestic and international stock markets to assess the degree of financial integration and to analyze what factors can affect it. In particular, the paper studied international integration through the lens of LOOP, captured in the cross-market premium between two identical assets. This measure is free from the comparability and aggregation problems that characterized previous attempts to gauge the extent of financial integration. We performed the estimations using linear AR and non-linear TAR models. Our estimates suggest the presence of non-linearities in the behavior of the cross-market premium, in the form of no-arbitrage bands driven by transaction costs. We found that integration is stronger for more liquid stocks. For those stocks, transaction costs (including the associated liquidity risk) are likely to be smaller. This result suggests that liquid firms (typically large ones) are those that are able to integrate well. Moreover, to the extent that investors demand a liquidity premium to hold firms for which arbitrage is relatively expensive, liquid firms are the ones that might benefit the most from the internationalization process. This result adds fresh evidence to the research that looks at firm-level data related to financial globalization (particularly at the differences within countries between firms with and without international activity), by studying the behavior of firm attributes such as trading activity, valuation, and capital structure. These studies along with the results presented in this paper suggest that the degree and effects of international financial integration vary substantially across countries and firms. Large, liquid firms are more connected to the international financial system than small, illiquid firms, and can potentially benefit the most from the internationalization process. The paper also showed that the cross-market premium reflects accurately the effective impact on international arbitrage of controls on cross-border capital movement. Controls do affect the size and persistence of deviations from LOOP by generating an asymmetric but opposite effect in the non-arbitrage bands. Controls on capital outflows induce a positive premium by raising the upper non-arbitrage band, while controls on capital inflows produce a negative premium by lowering the lower non-arbitrage band. In other words, regulations on capital movement prevent investors from engaging in arbitrage activity, raising the costs of shifting funds across borders. These controls have been used frequently to prevent crises and inhibit capital outflows once crises occur. The paper showed that those controls, even when they do not fully preclude cross-border flows, appear to work as intended and segment markets in practice. Indeed, it is only in the presence of these flows (and in proportion to their intensity) that the controls are reflected in the cross-market premium: de jure restrictions should induce a cross-market premium only when they are binding.44 Ultimately, this paper provided a direct measure of de facto integration, through which the effectiveness of restrictions on capital movement and the impact of factors (such as liquidity) that affect financial integration can be assessed more precisely. In addition, it offers a simple but accurate gauge of the effectiveness of capital controls, still a highly debated and topical issue, particularly now that many developing countries are adopting (or pondering) capital controls as a way to mitigate the appreciation of their exchange rates.