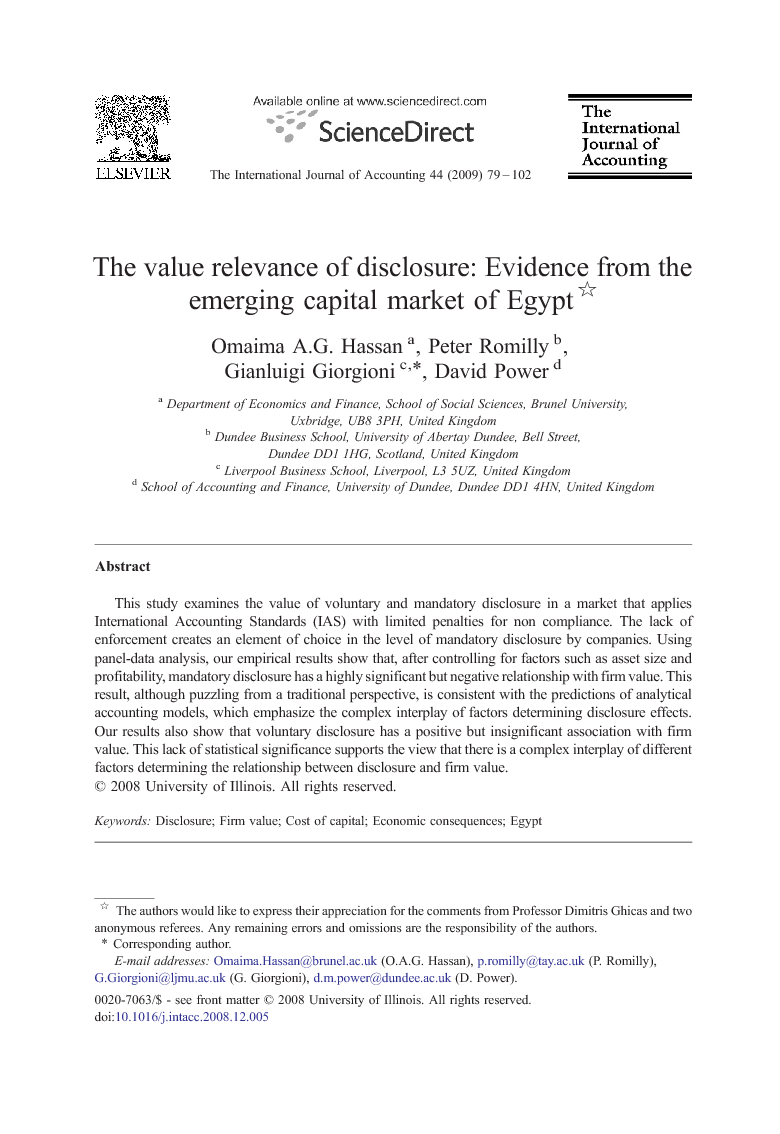 This study examines the value of voluntary and mandatory disclosure in a market that applies International Accounting Standards (IAS) with limited penalties for non compliance. The lack of enforcement creates an element of choice in the level of mandatory disclosure by companies. Using panel-data analysis, our empirical results show that, after controlling for factors such as asset size and profitability, mandatory disclosure has a highly significant but negative relationship with firm value. This result, although puzzling from a traditional perspective, is consistent with the predictions of analytical accounting models, which emphasize the complex interplay of factors determining disclosure effects. Our results also show that voluntary disclosure has a positive but insignificant association with firm value. This lack of statistical significance supports the view that there is a complex interplay of different factors determining the relationship between disclosure and firm value.

This research uses panel-data analysis to examine empirically the association between mandatory as well as voluntary disclosures and firm value for Egyptian listed companies. After controlling for asset size, profitability, leverage, sales growth, and industry type, the estimation results show a highly significant negative association between mandatory disclosure and firm value. Although this appears to be a puzzling result from the traditional perspective of the relationship between firm value and disclosure, we provide a number of theoretical arguments and a range of empirical evidence as to why such an association might arise. The main explanation is that costs associated with mandatory disclosure outweighed the benefits of such disclosure even when penalties for noncompliance were negligible in the Egyptian setting. One policy recommendation is that stiffer penalties should accompany mandatory disclosure requirements. Such penalties might encourage greater compliance with mandatory disclosure requirements and avoid these disclosures being seen as an adverse signal by outside investors. The regression results show a (weaker) positive relationship between voluntary disclosure and firm value. This result conforms to the traditional view that more information adds value to companies. Although the relationship is not statistically significant on an individual basis, it is jointly significant with mandatory disclosure. This study is one of the first investigations to examine the value of voluntary and mandatory disclosure in an emerging capital market; however it has a number of limitations. One potential limitation of studies using disclosure indices to investigate disclosure levels is that the results are only valid to the extent that the disclosure index used is appropriate. The selection of the items included in the disclosure index, and the classification into mandatory and voluntary disclosure indices, inevitably involves some degree of judgment and subjectivity. Although we have tried to diminish such subjectivity it cannot be removed entirely. Also, due to missing data we were unable to test for fixed effects in our panel-data analysis. Another limitation is that the research sample is not randomly selected. This is due to the difficulty of gathering data in an emerging country; hence, availability of data limits our ability to select a random sample. Further research could take a number of directions. One fruitful extension might be to re-examine the value of both mandatory and voluntary disclosure after the introduction of the new listing rules, which took place in August 2002. Specifically, it would be useful to know whether the new listing rules have led to any improvements in the level of compliance with mandatory disclosure and whether this in turn led to increases, if any, in the value relevance of such disclosures. Another extension of this study would be to examine the implications of applying new accounting standards to the cost of capital and firm value. For example, to test whether the implementation of the International Financial Reporting Standards (IFRS) for UK listed companies lead to any reductions in their cost of capital. Other proxies for disclosure quality could also be used, such as interim reports, investor relations, and management forecasts. Finally, it might be instructive to conduct a comparative study among a number of different countries in the MENA region, which apply IFRS but with different levels of enforcement policies, in order to determine the generality of our results from the Egyptian context.