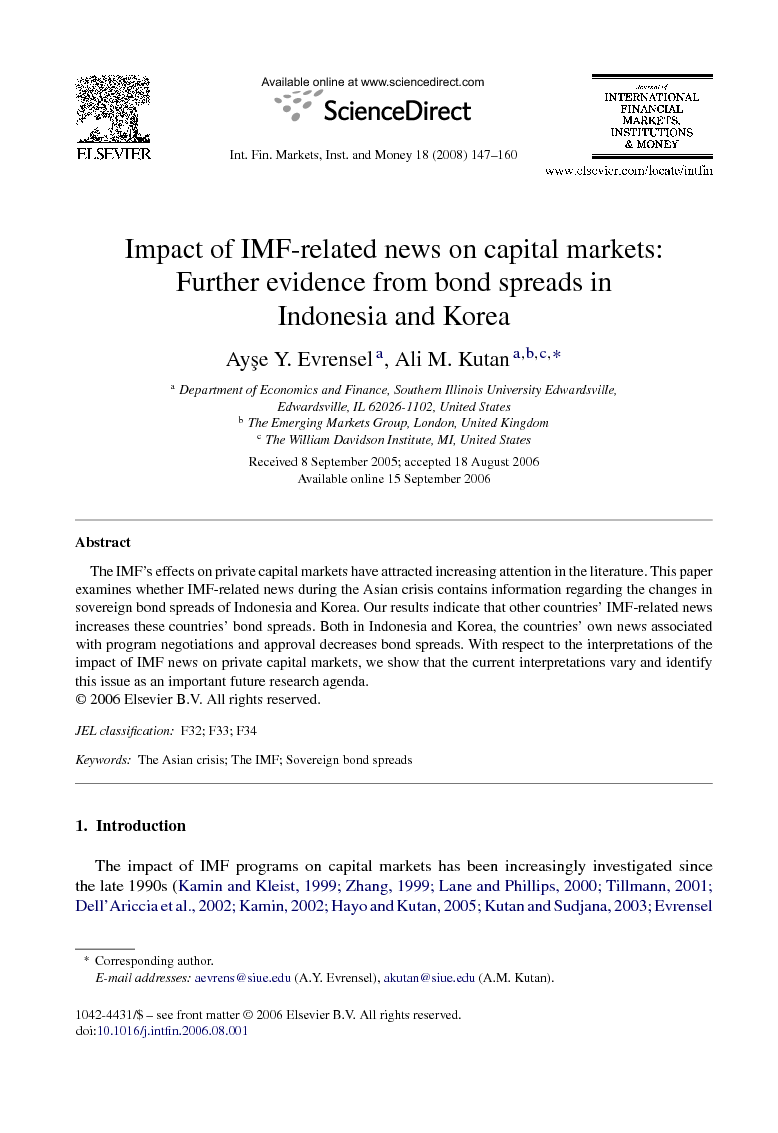 The IMF's effects on private capital markets have attracted increasing attention in the literature. This paper examines whether IMF-related news during the Asian crisis contains information regarding the changes in sovereign bond spreads of Indonesia and Korea. Our results indicate that other countries’ IMF-related news increases these countries’ bond spreads. Both in Indonesia and Korea, the countries’ own news associated with program negotiations and approval decreases bond spreads. With respect to the interpretations of the impact of IMF news on private capital markets, we show that the current interpretations vary and identify this issue as an important future research agenda.

In this paper, we contribute to the existing research regarding the IMF's effects on private capital markets. First, using the news approach, we estimate the changes in daily bond spreads in Indonesia and Korea due to IMF-related news during the Asian crisis. Our results indicate that other countries’ IMF-related news do not affect the country's spreads. As far as the countries’ own news is concerned, both in Indonesia and Korea, the announcements associated with program negotiations and approval lead to declining spreads. Second, we compare our results to those of the previous studies and discuss how they interpret their empirical results. Third, while the empirical studies that use composite bond indices such as the EMBI find increasing spreads associated with IMF programs, the studies that use country-specific bond data, such as our paper, find declining spreads. We emphasize the importance of using country-specific bond data, including both IMF-related news and program duration dummies. We note that the current practice is to interpret the results regarding spreads either as the lack of domestic implicit guarantees (increasing spreads) or the IMF's successful execution of its surveillance role (declining spreads). However, previous studies do not provide any proof for their interpretation, and there exists no approach that can clearly identify either the existence or the absence of domestic implicit guarantees. Clearly, the proof for the presence or absence of moral hazard lies in the examination of the country's fundamentals. Empirical evidence for moral hazard in a country's sovereign bond markets has to demonstrate a decline in bond spreads due to IMF-related news, while the country's current and expected fundamentals are worsening. Alternatively, if declining spreads are viewed as a sign of the IMF's surveillance capability, this needs to be demonstrated in the form of improving current and expected fundamentals. Because the outcome of declining spreads is consistent with two conflicting states (expected improvement in fundamentals or existence of implicit guarantees), future research should focus on the identification and estimation of these fundamentals along with bond spreads. Only then, we can verify whether prospective IMF programs motivate investors to take excessive risks or signal improved future fundamentals.