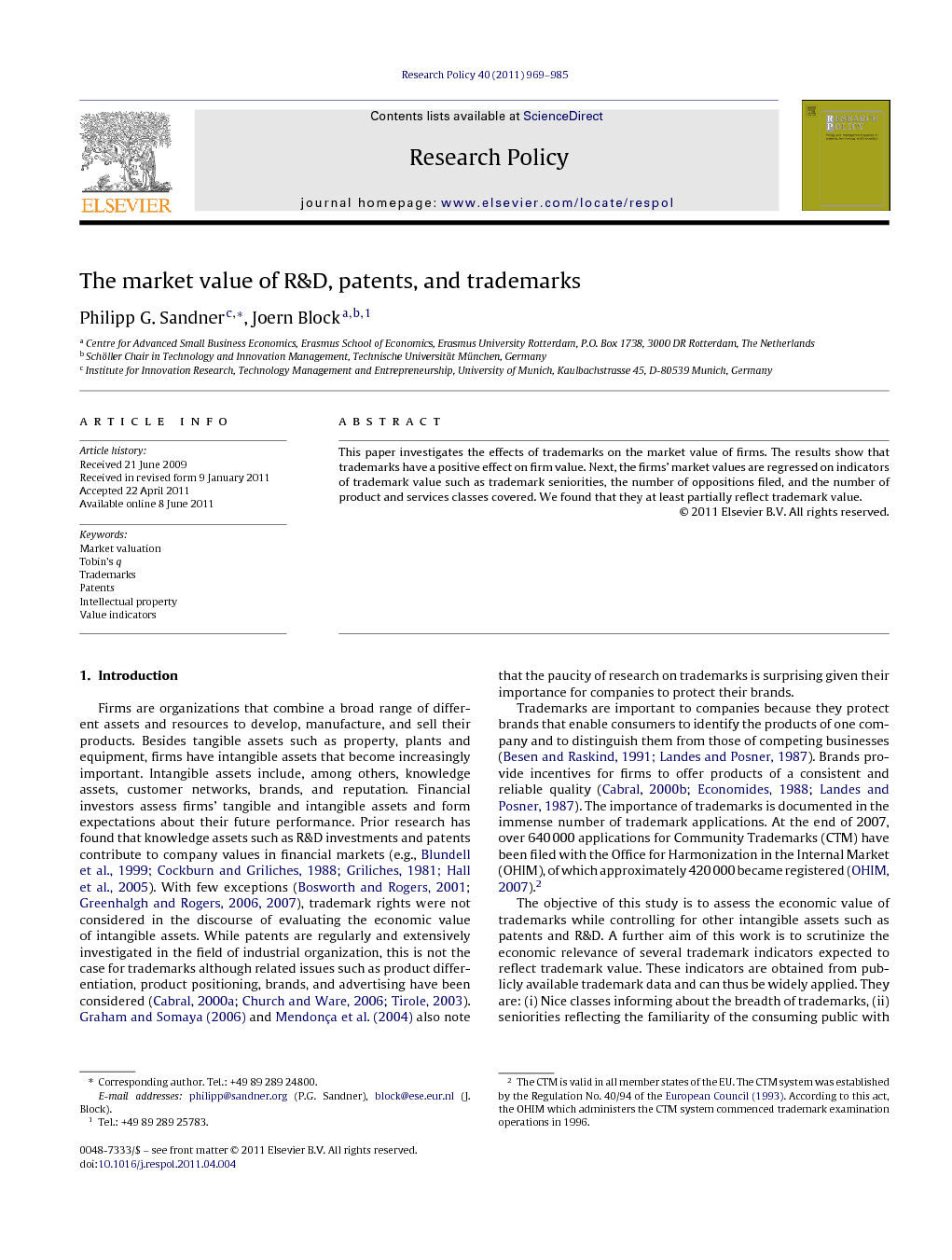 Firms are organizations that combine a broad range of different assets and resources to develop, manufacture, and sell their products. Besides tangible assets such as property, plants and equipment, firms have intangible assets that become increasingly important. Intangible assets include, among others, knowledge assets, customer networks, brands, and reputation. Financial investors assess firms’ tangible and intangible assets and form expectations about their future performance. Prior research has found that knowledge assets such as R&D investments and patents contribute to company values in financial markets (e.g., Blundell et al., 1999, Cockburn and Griliches, 1988, Griliches, 1981 and Hall et al., 2005). With few exceptions (Bosworth and Rogers, 2001, Greenhalgh and Rogers, 2006 and Greenhalgh and Rogers, 2007), trademark rights were not considered in the discourse of evaluating the economic value of intangible assets. While patents are regularly and extensively investigated in the field of industrial organization, this is not the case for trademarks although related issues such as product differentiation, product positioning, brands, and advertising have been considered (Cabral, 2000a, Church and Ware, 2006 and Tirole, 2003). Graham and Somaya (2006) and Mendonça et al. (2004) also note that the paucity of research on trademarks is surprising given their importance for companies to protect their brands.

Trademark rights are an essential instrument for companies to protect their acquired assets against impairment. As Phillips (2003, p. 641) states, “the trademark is the legal anchor which protects the brand from drifting away from its owner's control.” Correspondingly, rights conferred by trademarks are a vehicle used by companies to control a brand's development and to exploit the exclusivity gained through potentially large investments. However, trademark rights have rarely been examined in economics compared to the extensive body of literature on patents (Mendonça et al., 2004). Only few studies have analyzed these intangibles jointly (Bosworth and Rogers, 2001, Greenhalgh and Rogers, 2006 and Greenhalgh and Rogers, 2007). Our study addresses the economic value of both trademarks and knowledge assets. We investigate whether the market value of publicly traded companies is associated with their trademark portfolios