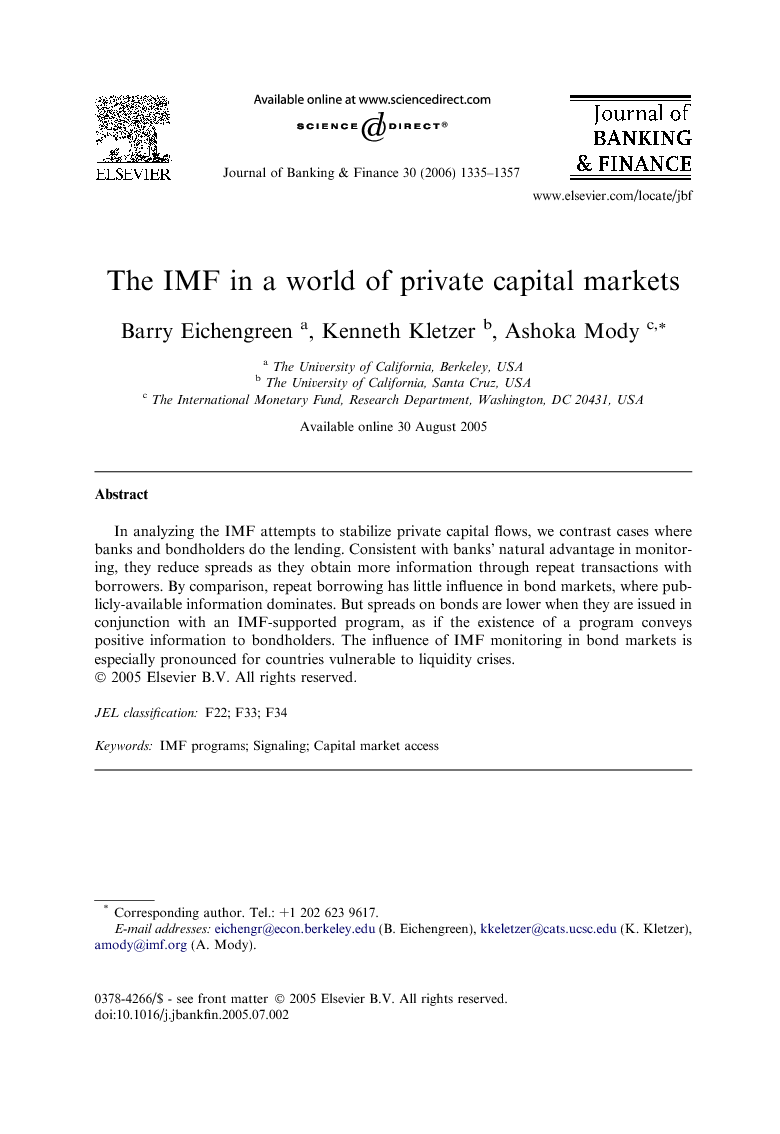 In analyzing the IMF attempts to stabilize private capital flows, we contrast cases where banks and bondholders do the lending. Consistent with banks’ natural advantage in monitoring, they reduce spreads as they obtain more information through repeat transactions with borrowers. By comparison, repeat borrowing has little influence in bond markets, where publicly-available information dominates. But spreads on bonds are lower when they are issued in conjunction with an IMF-supported program, as if the existence of a program conveys positive information to bondholders. The influence of IMF monitoring in bond markets is especially pronounced for countries vulnerable to liquidity crises.

Bank loans and bonds are alternative ways of transferring capital to emerging markets. The growth of global bond markets is of course one of the signal features of the last 15 years of international financial history. Transacting through bond markets has obvious advantages for investors, notably greater scope for diversifying country risk. Given the advance of securitization across a broad front, it is therefore useful to recall why bank finance continues to play an important role in international financial markets. Bank loans are easier to access for borrowers new to such markets, since banks have a comparative advantage in bridging information asymmetries. Banks’ intermediation technologies are also better suited to providing small loans. We show in this paper, how the ability of banks to bridge information asymmetries is supported by repeat borrowing. As borrowers return for credit, they reveal information about themselves, reducing uncertainty and hence incurring a lower risk premium on their loans. Since the issuers of bonds are better known, the value of information obtained through repeat issuance is less. Indeed, to the extent that it results in a proliferation of separate bond issues, repeat borrowing may in fact increase the risk premium, reflecting the greater difficulty of coordinating the holders of different issues in the event of debt-servicing difficulties. These observations have obvious relevance to arguments about IMF monitoring and surveillance of indebted countries. Our results suggest that IMF monitoring and surveillance matter more in bond markets. This role for the IMF has the largest impact when debts reach 40% of GDP and countries are therefore vulnerable to liquidity shocks. However, as debts continue rising from there, the impact of monitoring declines. There being relatively little uncertainty about the nature of the problem, lenders now care mainly about whether the IMF is providing real resources that help to keep debt service current. But as debt and the risk of insolvency grow still higher, even a significant amount of additional official finance may not be enough to make a difference. At that point, what matters most is when programs turn precautionary, signaling that conditions have improved sufficiently that the country no longer requires financial assistance. There clearly is further scope for elaborating these results. More generally, the approach taken here points to the importance of distinguishing capital international flows by instrument and intermediary. Macroeconomic analyses lumping together bank loans and bonds will tend to neglect important differences between these market segments that stem from the nature of the information environment, the monitoring technology, and the scope for creditor coordination. We have shown in this paper that these distinctions are important for understanding the impact of IMF programs. We would conjecture that the same is true for a variety of other issues in international finance.