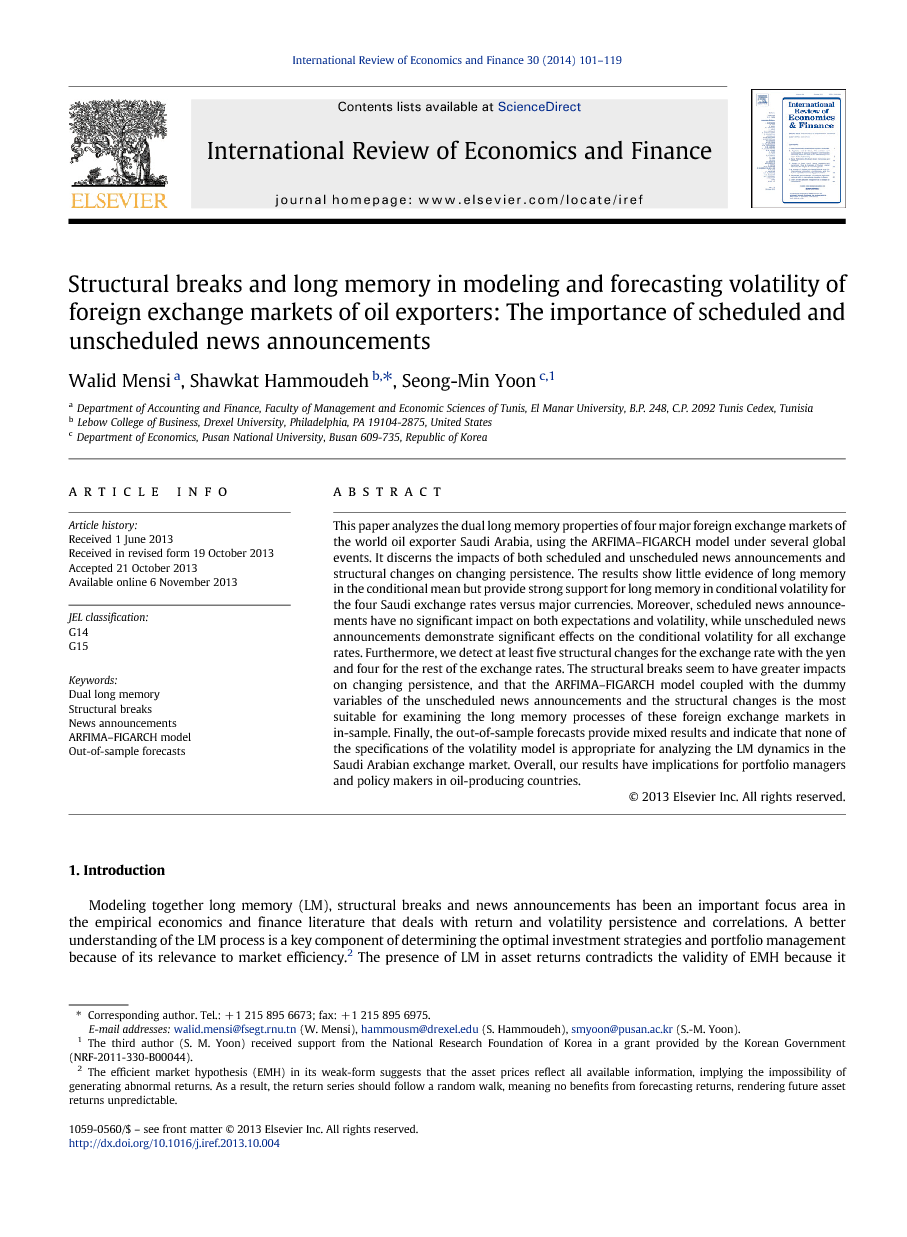 This paper analyzes the dual long memory properties of four major foreign exchange markets of the world oil exporter Saudi Arabia, using the ARFIMA–FIGARCH model under several global events. It discerns the impacts of both scheduled and unscheduled news announcements and structural changes on changing persistence. The results show little evidence of long memory in the conditional mean but provide strong support for long memory in conditional volatility for the four Saudi exchange rates versus major currencies. Moreover, scheduled news announcements have no significant impact on both expectations and volatility, while unscheduled news announcements demonstrate significant effects on the conditional volatility for all exchange rates. Furthermore, we detect at least five structural changes for the exchange rate with the yen and four for the rest of the exchange rates. The structural breaks seem to have greater impacts on changing persistence, and that the ARFIMA–FIGARCH model coupled with the dummy variables of the unscheduled news announcements and the structural changes is the most suitable for examining the long memory processes of these foreign exchange markets in in-sample. Finally, the out-of-sample forecasts provide mixed results and indicate that none of the specifications of the volatility model is appropriate for analyzing the LM dynamics in the Saudi Arabian exchange market. Overall, our results have implications for portfolio managers and policy makers in oil-producing countries.

The existing literature contains conflicting evidence regarding the long memory process and the accuracy of volatility forecasts in financial time series. We address in this research the question of whether the exchange rates with respect to major currencies of the world's largest oil exporter follow a dual LM process and discern the impacts of news announcements and structural breaks on conditional variance. Finally, we apply both the out-of-sample forecast analysis and the equal accuracy test of Diebold and Mariano (1995) to assess the forecast performance models for the daily conditional mean and conditional volatility of the SAR's bilateral exchange rates. Evidence of a dual LM in the SAR markets is limited to both the SAR/USD and SAR/EUR rates. We find strong evidence for LM in variance for all rates. The results also reveal that the scheduled news announcements have no significant impacts to reduce or increase the persistence of conditional variance for these markets, while the unscheduled news announcements contribute to increase the variance in most the SAR markets. We also detect at least four structural breaks for these foreign exchange rates over the period 2003–2009. The incorporation of these variables appears strongly significant on the ARFIMA–FIGARCH model. More specifically, the level of volatility persistence decreases significantly when adjusting for the structural breaks for all SAR exchange rates. These empirical findings underpin the relevance of incorporating heterogeneous (unexpected) news events and structural breaks to explain the different volatility patterns of exchange rates. As a result, they provide evidence of the predictive effect of macroeconomic releases on LM in the exchange rate markets of this oil-rich exporter. These results refute the efficient market hypothesis in its weak form. Our conclusions have several implications for financial risk managers and policy-makers. We also show that the estimates values of DM statistics for out-of-sample performance are mixed and that none of the volatility models is appropriate for analyzing the LM dynamics in the Saudi Arabia foreign exchange market. It will be intriguing in the future to extend this work by three main avenues. (1) The joint ARFIMA–FIGARCH model should be improved in order to consider the asymmetric effects of financial time-series. (2) It would be interesting to consider the assumption of non-normality for capturing the asymmetry and fait tails of residual distributions (see the significance of the Pearson goodness-of-fit statistic) based on the Student's t-distribution and the Skewed Student's t-distribution. (3) To enhance the accuracy of the forecasting ability of models, it would be worthwhile to apply the asymmetric loss functions to penalize under/over prediction.