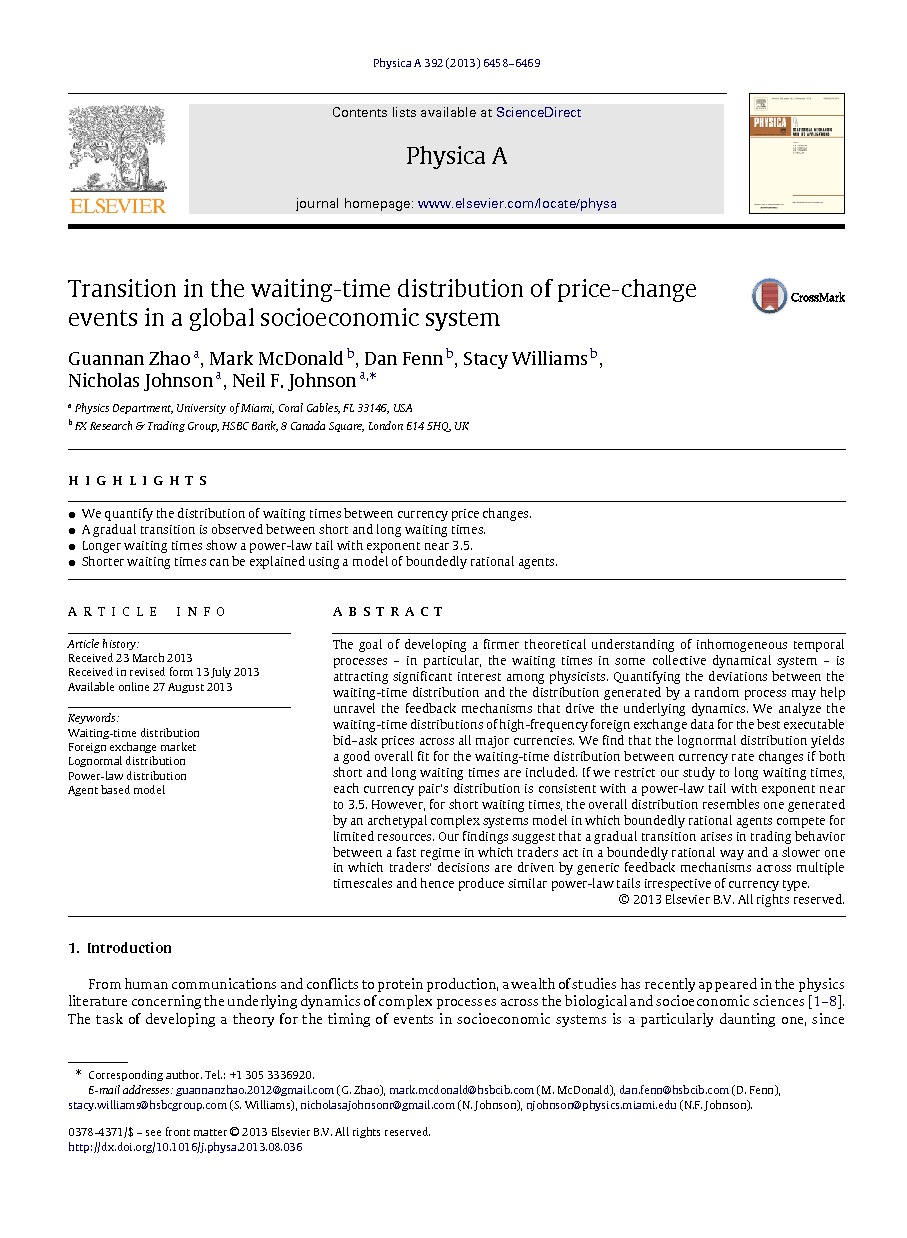 The goal of developing a firmer theoretical understanding of inhomogeneous temporal processes–in particular, the waiting times in some collective dynamical system–is attracting significant interest among physicists. Quantifying the deviations between the waiting-time distribution and the distribution generated by a random process may help unravel the feedback mechanisms that drive the underlying dynamics. We analyze the waiting-time distributions of high-frequency foreign exchange data for the best executable bid–ask prices across all major currencies. We find that the lognormal distribution yields a good overall fit for the waiting-time distribution between currency rate changes if both short and long waiting times are included. If we restrict our study to long waiting times, each currency pair’s distribution is consistent with a power-law tail with exponent near to 3.5. However, for short waiting times, the overall distribution resembles one generated by an archetypal complex systems model in which boundedly rational agents compete for limited resources. Our findings suggest that a gradual transition arises in trading behavior between a fast regime in which traders act in a boundedly rational way and a slower one in which traders’ decisions are driven by generic feedback mechanisms across multiple timescales and hence produce similar power-law tails irrespective of currency type.

We have obtained various results which help clarify the physical nature of intermittent processes in the world’s largest socioeconomic system. Specifically, we have explored fitting the exponential distribution, the Weibull distribution, and the lognormal distribution to the entire distribution of waiting times between executable price changes across the major currencies in the FX market, and also fitting a power-law distribution to the tail of these waiting-time distributions. We presented an agent-based model, showing that it provides a good fit for the short-waiting-time regime as well as being able to interpret the underlying parameters in terms of the properties of the individual trading entities (e.g., their memory mm and the number of strategies ss). By contrast, for long waiting times, we found that the distribution for each currency pair exhibits a power law with exponent around 3.5. This unexpected transition in the distribution as we move from short to long waiting times requires further investigation to assign a unique explanation. However, we speculate that it arises because the regime of short waiting times is dominated by traders (and algorithms) operating with little time for processing information, and hence tends to be driven by bounded rationality trading strategies as in the El Farol bar problem. By contrast, the regime of longer waiting times allows a wide range of analyses from naive to complex, and hence is liable to give rise to feedback processes across multiple timescales—and hence power-law behavior in which there is by definition no fixed single timescale. We stress that, when exploring the power-law distribution, we made sure to use the rigorous statistical testing procedure introduced by Clauset et al. [20]. In addition to the intrinsic interest within the field of statistical physics, our findings should prove to be of interest to researchers studying the theoretical pricing of exotic securities, and for designing algorithmic trading strategies for liquidation, for example, how to break a large position into small pieces in order to disguise the overall trade.