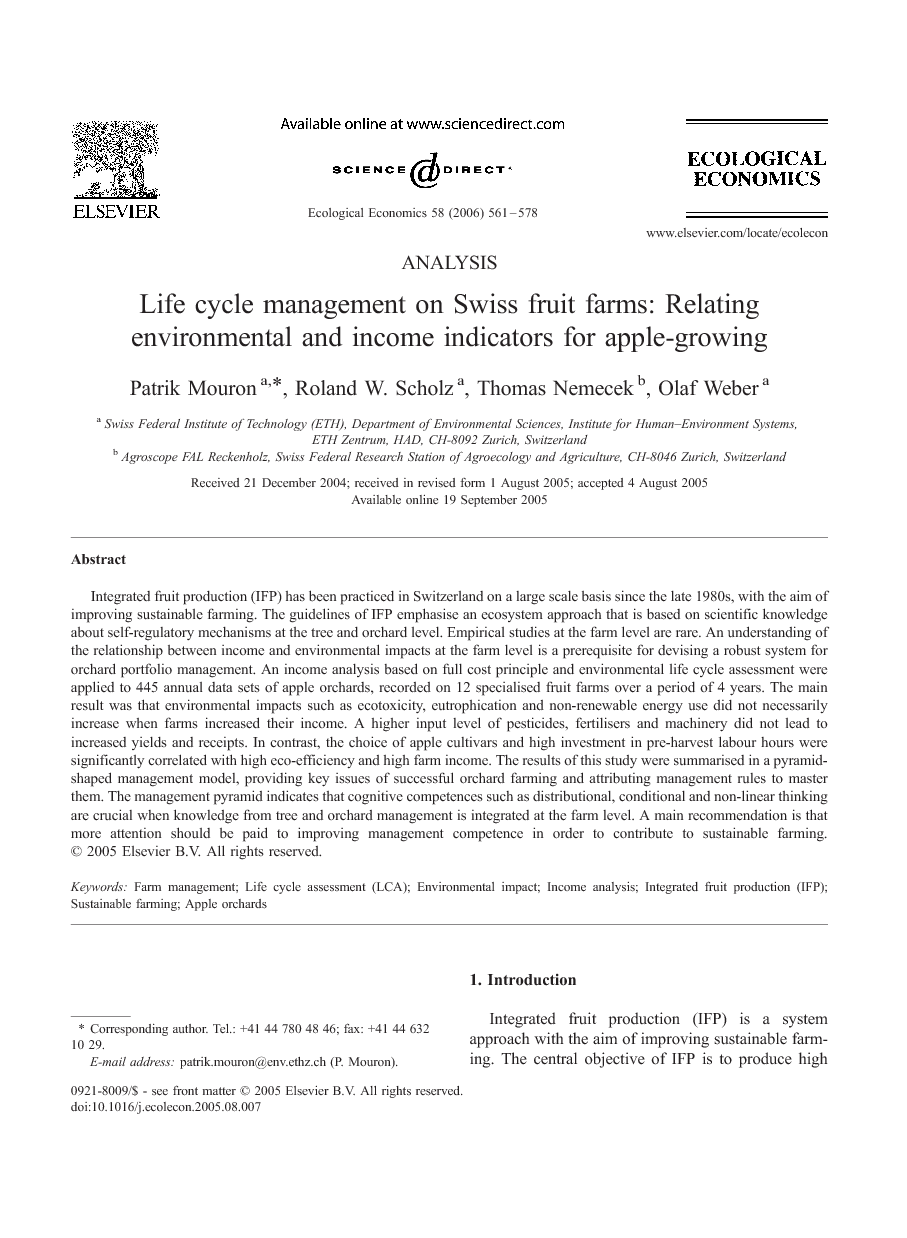 Integrated fruit production (IFP) has been practiced in Switzerland on a large scale basis since the late 1980s, with the aim of improving sustainable farming. The guidelines of IFP emphasise an ecosystem approach that is based on scientific knowledge about self-regulatory mechanisms at the tree and orchard level. Empirical studies at the farm level are rare. An understanding of the relationship between income and environmental impacts at the farm level is a prerequisite for devising a robust system for orchard portfolio management. An income analysis based on full cost principle and environmental life cycle assessment were applied to 445 annual data sets of apple orchards, recorded on 12 specialised fruit farms over a period of 4 years. The main result was that environmental impacts such as ecotoxicity, eutrophication and non-renewable energy use did not necessarily increase when farms increased their income. A higher input level of pesticides, fertilisers and machinery did not lead to increased yields and receipts. In contrast, the choice of apple cultivars and high investment in pre-harvest labour hours were significantly correlated with high eco-efficiency and high farm income. The results of this study were summarised in a pyramid-shaped management model, providing key issues of successful orchard farming and attributing management rules to master them. The management pyramid indicates that cognitive competences such as distributional, conditional and non-linear thinking are crucial when knowledge from tree and orchard management is integrated at the farm level. A main recommendation is that more attention should be paid to improving management competence in order to contribute to sustainable farming.

Integrated fruit production (IFP) is a system approach with the aim of improving sustainable farming. The central objective of IFP is to produce high quality food by using natural resources and regulatory mechanisms while replacing polluting inputs (IOBC, 2002, p. 1; Boller et al., 2004, p. 4). In addition, IFP not only takes the protection of the environment into account but also the income of the fruit-grower as well as health aspects of farmers and consumers. The emphasis on the better understanding of agro-ecosystems as a base for sustainable farming is widely supported by researchers into agricultural production systems (Andrews and Reganold, 2004 and Bertschinger et al., 2004a). Lewis et al. (1997), for example, conceptualised the vision of IFP as a total system approach. In Switzerland, this approach began towards the end of the 1970s (Boller et al., 1998) and, by the late 1980s, was already practiced on a larger scale. In 2001, 94% of Swiss apple acreage was managed according to IFP guidelines and 5% according to organic guidelines. Guidelines in these production systems are based on research addressing single trees and blocks of trees (orchards) while empirical data at farm level concerning the portfolio management of orchards are rare. There are noteworthy gaps in evidence concerning whether the self-regulatory approach of IFP works in practice at the farm level or whether there is a fundamental trade-off between farm income and environmental impacts, thereby calling for policy interventions. Several studies on income/environment trade-offs in agricultural production systems have investigated specific inputs at the farm level (e.g., fertilisers, pesticides). In the case of insect management, Lohr and Park (2002) reported that “In practice, American farmers do not always choose sustainable practices, even when they can improve their farm economic and environmental conditions by doing so.” Wilson and Tisdell (2001) reported similarly paradoxical behaviour with respect to pesticide use. Archer and Shogren (2001) suggested that taxes might be the only way to reduce herbicide inputs in arable crops. For grassland systems, Oglethorpe and Sanderson (1999) found that different policy instruments could have positive effects on management inputs, which in turn improve ecological diversity. In the case of nitrogen management in arable crops, Brady (2003) found that policy interventions are necessary and cost-efficient because the self-regulatory mechanisms of conventional farming are insufficient in preventing negative effects on water quality outside of the farm. In contrast, Falconer and Hodge (2001) concluded that taxes on pesticide inputs might be less effective than supporting a shift from conventional farming to agro-ecosystem oriented production systems such as integrated or organic farming. Similar results are reported by Van Lierde and Van den Bossch (2004) for fruit-growing in Belgium, where farms with IFP achieved similar incomes to conventional farms but with fewer environmental impacts. The advantage of system-oriented production is also reported in comparative studies of different apple production systems for the USA (Reganold et al., 2001) and for Switzerland (Bertschinger et al., 2004b). Despite the input restrictions detailed by the guidelines for integrated and organic farming, in practice the performance of farms within such defined production systems varies widely. Rigby et al. (2001) applied an indicator of environmentally sound practice to horticultural producers in the UK. They found that organic producers generally had higher scores than conventional producers. However, since the within-group variation was substantial, there was some overlap between the scores of the two producer groups. The authors consequently suggested that it would be an over-simplification to equate organic production with environmental sustainability. Considerable variation for economic indicators within an otherwise homogeneous group of farms in Switzerland has also been reported (FAT, 2000 and Mouron and Scholz, 2005) as well as for environmental impacts (Rossier and Gaillard, 2004 and Mouron et al., 2005). These results indicate the presence of substantial freedom for farm management practices within the guidelines of official production systems. However, it is still an open question if this entrepreneurial freedom within a production system leads to trade-offs between farm income and environmental impacts. The objective of this paper is to identify ecological–economic success criteria in a homogeneous group of integrated fruit farms in Switzerland. This is done (i) by analysing the influence of farm-structure variables such as the experience of the farm manager, farm size, the amount of orchards and the cultivar mix on farm income and environmental impacts; (ii) by analysing the correlation between farm income and environmental impacts at the farm level and (iii) by explaining the observed relationship between income and environmental impacts of fruit-growing when considering apple orchards. Our study documents the apple orchards of a group of comparable farms by using income analysis and life cycle impact assessment. The farms were operated under homogeneous boundary conditions with respect to production guidelines (IFP), climate and market access. Differences in farm performance can therefore be considered to be mainly due to differences in their management. Unique to our farm data is the fact that they were recorded at the orchard level over a span of 4 years. This is a reasonable period for a perennial crop system, thereby permitting us to explain farm mean values by the variability of their orchards' performances. A total of 445 annual data sets of apple orchards from 12 farms were assessed. The paper is structured as follows: the next section describes the methodologies and variables of income analysis and life cycle assessment. The empirical results then follow. The results are discussed referring to a pyramidal management framework, providing an integrated interpretation of the various findings of successful orchard farming. Finally, the implications for orchard farmers, IFP guidelines and public policy addressing sustainable farming are presented.

This study examines the relationship between the income and environmental impacts of a homogeneous group of Swiss fruit farms certified as practising integrated fruit production (IFP). The empirical results provide some evident system rationale for orchard farming explaining why environmental impacts do not increase when farms increase their income. Successful apple-growing relies much on dealing with the inherent mechanisms of tree growth rather than on increased inputs of pesticides, fertilisers or machinery. Simplifying the results to the extreme, one could say that an apple grower has only to concern himself with high yields (respectively receipts) in order to be eco-efficient and to reach a high income. In practice, achieving high and stable yields at the farm level over a period of years is a complex management task. Key issues of successful management are creating an optimum orchard portfolio, allocating the inputs among those orchards in order to stabilise the variance of yield at the farm level, investing enough pre-harvest hours to establish and maintain the productivity of an orchard over its lifetime, and meeting the critical periods of required inputs during a season so that inputs are able to support optimum tree and fruit growth. Some of these issues are related to knowledge of orchard and tree management and need to be integrated into a farm-wide perspective to manage the portfolio of orchards. Although our study was able to provide prescriptive management knowledge for such integration, we expect that it would take several years for a farm to improve its performance. This not only because in most cases it will be necessary to re-plant orchards but also because portfolio optimisation implies an improvement in cognitive competences such as distributional, conditional and non-linear thinking. There is considerable management freedom within the guidelines of IFP (IOBC, 2002) as indicated by the large differences in the performance of the farms. By the same token, this freedom does not cause environmental problems when fruit farms increase their income. No trade-off is observed between income and environmental impacts. Therefore, our study provides evidence that the main principles of the IFP guidelines, “respect the environment while being economically viable” and “use natural resources and regulation mechanisms to replace polluting inputs”, are practicable at the farm level. However, the underlying economic mechanism is not based on lower costs due to reduced inputs, as suggested in the IFP guidelines, but rather relies on achieving high outputs with the same input intensity. While the IFP guidelines aim to reduce ecotoxicity and eutrophication, they do not address energy use. It seems that energy use could be an interesting issue to add to the guidelines, since high-income farms used less energy per hectare than low-income farms. It is very likely that at the farm level the management rules and cognitive competences to manage a portfolio of orchards follow the same principles for all sorts of perennial tree crop systems (e.g., pip fruit, stone fruit, citrus fruit) regardless of whether they follow the Integrated or Organic fruit-growing guidelines. A better understanding of managing portfolios in orchard farming contributes strongly to sustainable fruit production. This would clearly support the suggestions of those who propose that in horticultural sciences the funds for farm management research issues are disproportionately low compared to the amount of money invested in molecular biology approaches (Warrington, 2004 and Looney, 2004). Policy interventions or regulations in addition to the production guidelines of integrated fruit production do not seem to be indispensable for the promotion of ecological–economic fruit-growing because this study demonstrates a strong correlation between environmental performance and successful economic performance. Additional regulations concerning the input side of the production process, such as raising taxes on pesticides, fertilisers or energy would appear inappropriate for this purpose. In contrast, this study presents evidence that much more attention should be paid to enabling fruit farmers to make better use of the output potential of their orchard portfolios by improving their management abilities at the farm level. Further research should deal with how farmers can improve their capability to make intelligent use of agricultural techniques and management tools. We recommend that the endeavour of collecting reliable farm data using full cost principle is a worthwhile approach, since the same data can also be used to assess environmental impacts through the use of LCA methodology. The methodologies are complementary and both can contribute to the development of ecological–economic management models which provide robust management rules and knowledge for sustainable farming.